After a 17 million dollar overhaul, the newly reopened Bacchanal Buffet at Caesar’s Palace offers diners one of the finest buffet experiences Las Vegas has to offer. With more than 500 different dishes prepared on a daily basis from more than 800 recipes, Bacchanal Buffet is hard to top. International dishes abound with American, Mexican, Italian, Chinese, and Japanese cuisine as well as Seafood, Pizza, Deli, and an impressive Dessert Station. Each offers an action station as well as plated and “mini” dishes. Breakfast is available from Monday through Friday, 7:00 a.m. to 11:00 a.m. and will only set you back $25.99 for adults and $19.99 for little ones. Lunch, offered Monday through Sunday from 11:00 a.m. to 3:00 p.m. costs $32.99 for adults and $25.99 for children. Dinner, served daily from 3:00 p.m. to 10:00 p.m. is $45.99 for adults Sunday through Thursday and $50.99 Friday and Saturday. For kids, the prices are $35.00 during the week and $45.99 on Friday and Saturday. Weekend brunch, Saturdays and Sundays from 8:00 a.m. to 3:00 p.m. costs $41.99 for adults and $35.99 for kids.

One of the Best Breakfast Buffets in Las Vegas

A little after eight o’clock on a Wednesday morning, my boss and I find ourselves navigating through the labyrinth of halls that make up Caesar’s Palace. We have heard that after a recent renovation, the Bacchanal Buffet is nice, but we have no idea what to expect. As we make our way through the halls and casino parlors, past construction zones indicative of the resort undergoing renovations, we find ourselves outside the still new, ultra-modern buffet.

After a seventeen million dollar overhaul, the newly reopened Bacchanal Buffet at Caesar’s Palace offers diners one of the finest buffet experiences Las Vegas has to offer. With more than five hundred different dishes prepared on a daily basis from a library containing more than eight hundred recipes, Bacchanal Buffet is hard to top. International dishes abound with American, Mexican, Italian, Chinese, and Japanese cuisine as well as seafood, wood-fired pizza, deli meats and cheeses, and an impressive dessert station. Each section offers an action station as well as plated and “mini” dishes. Breakfast, served Monday through Friday, 7:00 a.m. to 11:00 a.m. sets diners back $25.99. Lunch, offered Monday through Friday, 11:00 a.m. to 3:00 p.m., costs $32.99. Dinner, served daily from 3:00 p.m. to 10:00 p.m., is $45.99 Sunday through Thursday, and $50.99 Friday and Saturday. Weekend Brunch, Saturdays and Sundays from 7:00 a.m. to 3:00 p.m., costs $41.99.

The attention to detail is where the Bacchanal Buffet truly shines. I am the type of person that notices fine details. The little things elevate the experience at the Bacchanal above and beyond the competition. The first thing I notice as we sit at our table is the quality of the setting. The flatware is heavy and shines brightly. I inspect the maker’s mark, and see that the stainless utensils are by Sant Andrea. The European design element does not end with the silverware. The spotless white linen is made in Italy by Casa Rovea, while the porcelain dinnerware is made in France by Bernardaud.

Our server approaches the table to take our drink orders. I request a coffee, and my boss orders decaf tea. The coffee arrives in a stainless steel carafe, a big step up from the standard plastic containers generally associated with buffet coffee. The medium roast brew is extremely hot, which is how I like it. My boss’s tea shows up accompanied by a small glass jar of premium honey. The tea offered is the same tea he drinks at home, yet another indication of the high level of quality afforded guests at the Bacchanal.

Cooks, whose anthracite kitchen uniforms are accented with royal purple ivy hats, staff the kitchen behind the buffet. For those not well versed in the history of Ancient Rome, purple was reserved for the Imperator of the Republic. “Imperator” is the base of the modern word emperor.

Upon my first attempt at making a plate, I find myself overwhelmed by the magnitude and quality of choices. I end up simply starting at the beginning of the buffet and making my way down until my plate is full. I keep the first round simple. I grab a slice of French toast, coated in a batter seasoned lightly with cinnamon; it is cooked to an attractive light brown. I ladle some warm maple syrup on top of the thick slice of French toast. Arriving at the yogurt station, I serve myself a ramekin of Greek yogurt. This particular station features four deep bowls of assorted yogurts, with fruit and berry selections to the right side. I wrap up the first round with some corned beef hash, topped with a fried quail egg, and served in a mini ceramic skillet.

On my second trip to the buffet, I have a better understanding of where to go. I spot some light and fluffy scrambled eggs, and scoop a nice portion on my plate. I take a shot at the mini Croc-Madames which are served on a dedicated plate. Like the corned beef hash, these are prepared with a fried quail egg on top. I pick up the tongs and select a few pieces of the lean and crisp apple-wood smoked bacon. The many different sausages are cooked well, and seasoned appropriately for the style in which they are prepared. Served in mini cast iron pans are the Huevos Mexicanos. These feature a fried sunny side up egg atop corn tortillas and a spicy red sauce (salsa roja) all topped with cotija cheese. There are two kinds of hash browns. The first is the standard shredded version. The second are hash brown patties, served in their own mini fry basket. Both are crisp on the outside, soft on the inside, and are nice and hot.

On the third round, I start with the old standby, Eggs Benedict. The perfectly poached egg has a wispy egg white and runny yolk. The Hollandaise sauce poured over the egg dish is spot on. A slice of hand carved bacon has wonderful marbling, rather than the layered fat and lean meat I have seen at other establishments. The omelet station features jalapeno, sausage, ham, bacon, spinach, and sautéed onion, but curiously no mushrooms. Salmon is also an option, but I go for everything minus the salmon.

On my way back to the table, with my freshly crafted omelet, I spot the hot sauce collection. I am a proponent of hot sauce, and there are literally dozens of them to choose. I go with my standard Tapatio, which I haven’t seen since arriving in Vegas, but not only is there a multitude of genuine Mexican hot sauces, but also a myriad of American “boutique” hot sauces and other international offerings such as Sriracha.

At this point, I venture further into the depths of the buffet, and realize there is an entire section that I had previously missed. This is no enclave either. This section is an expansive extension that includes Asian cuisine. When I say Asian cuisine, I mean the equivalent of both a Chinese and Japanese restaurant, only serving their respective fare in buffet format. There are also some Thai items. In addition to all this, there is what can only be described as a honey bar. Yes, there is a dedicated section of the buffet addressing a wide variety of different types of honey. As someone who enjoys only specific types of honey, I can appreciate this luxurious addition to the buffet.

At each station, I encounter a staff member that is friendly, welcoming, and polite. They all give the impression that they like their work, and are genuinely glad to be helping guests. This is a refreshing change of pace, because to be honest, the other buffets we have visited were less than friendly at times. I can say that all of the omelet and crepe cooks I met are nice and friendly, but the staff at some of the other hotel buffets were less than accommodating. Sitting for an hour and a half and not getting any refills on water can be frustrating when you put back as much coffee as I do. As much as I would like to survive on coffee alone, the reality is, I need water with my coffee. An empty water glass was never an issue at Bacchanal. My glass stayed full the entire time we dined, without me having to ask for a refill once.

After my omelet, my stomach is nearing its max-fill point, so I head over to the dessert station for a dose of the sweet stuff. I decide to begin with a crepe, since my good timing sees my approach feature no one in line at the crepe station. I choose a banana and Nutella crepe. Yes, the buffet at Caesar’s has real Nutella. The crepe is simple, sweet, and delicious. The hazelnut and chocolate spread melts over the bananas as the heat from the fresh crepe blends the heavenly concoction together as one cohesive dish. The combination of chocolate and banana, and the light flavor profile of hazelnut added by the Nutella… well, it does not get much better than this. The ice cream selection is also extensive. The scoop of Aztec Chocolate I enjoy features a spicy nutmeg tone, strong Oaxaca chocolate, and just the right amount of chili. The rich Mexican-style chocolate, much different from what most consider standard chocolate, has a light but spicy afterglow. I like food spicy, so what I might consider a light afterglow, may be truly spicy for some, so be forewarned. I also take a stab at the Spicy Mango sorbet. This is even spicier than the Aztec Chocolate, but the burn of the chili paired with the sweet coolness of the mango makes for a nice contrast in the dish.

The Bacchanal Buffet at Caesar’s Palace is a clear winner. The presentation, quality of food, diversity of selection, atmosphere, price, customer service, and general ambience is head and shoulders above anywhere else we visited.

Unfortunately, I am but one man. I wish I could have sampled everything available at Bacchanal, but the physics and physiology involved in such a venture makes that goal an impossibility, at least for me. As stated previously, more than 500 different dishes are prepared on a daily basis. I barely scratched the surface. To do justice to the selection available, I feel as if I would have to write an expansive book to cover all that is offered at this buffet. The photos that accompany this review paint a vivid picture though, and the general idea comes across. That being said, the Bacchanal Buffet at Caesar’s Palace is not to be missed. 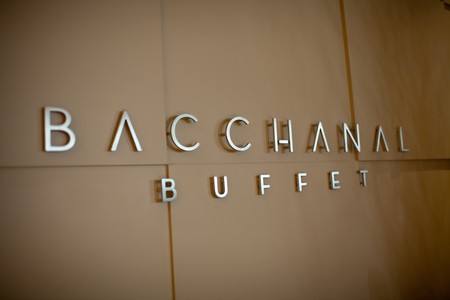 On a Saturday night, be prepared to wait at least an hour and then stand in a very long line to get the seafood everyone wants. Although fish and lobster is on display, you won't see any lobster, and the oysters and crab legs are being grabbed up so fast you might not get what you want or have to wait until the next batch gets put out by the staff. I won't go on a weekend again.