Opened in 1955, Bob Taylor’s Original Ranch House is the oldest steakhouse in Las Vegas. Situated in the suburban northwest, the restaurant still feels “out in the country,” and diners will find a relaxed, comfortable atmosphere in which to enjoy excellently-prepared grilled meats. Customers may dine in the Western-themed main dining room or the sports bar. Either way, the offerings of steak, chicken, and seafood with hearty side dishes should leave no diner hungry, and the cozy location with its mountain views will leave the spirit fed too.

Hearty Food in a Friendly Atmosphere

Bob Taylor’s Original Ranch House stands as a unique destination for Las Vegas locals and adventurous tourists. Opened in 1955, it is the city’s oldest steakhouse. Located just off Ann Road near I-95 in northwest Las Vegas, the Ranch House originally stood beyond the edges of suburban development, even as recently as ten years ago. Now, I-215 is visible to the north, a subdivision flanks the restaurant to the south, and strip malls light up the view to the west. Yet, with clever landscaping, the Ranch House still manages to seem “out in the country.” We breathed a little easier as we pulled into the gravel lot and traversed the tree-lined walk into the restaurant.

Inside, the Ranch House has the comfortable feel of a nice family restaurant. The open grill produces tantalizing smells as you walk into the main dining room. The front of the restaurant offers wonderful views of the sunset over the mountains and a large fireplace, two distinct advantages over the back section with its low ceiling. Memorabilia from Old Westerns provide interesting décor and contribute to the feeling of being thrown back in time. Nowhere in the establishment is gambling visible or audible. Our server was prompt and friendly, offering good advice on the menu selections.

Bob Taylor’s Ranch House is unapologetically a steakhouse. The carnivorous flair begins with the appetizers, all but one of which, the sautéed mushrooms, features meat. We chose the Cajun Shrimp Scampi. Smothered in a creamy, spicy Creole sauce, the dish contained four shrimp, a nice size given the vast scale of our dinners to come. The waitress offered us extra bread for dipping in the sauce before we even asked for it. The complimentary garlic cheese bread itself is a treat, warm and soft with a crunchy layer of cheese and spices.

The menu features a wide array of chicken, seafood, and, of course, steak. The halibut and salmon choices have the option of Cajun seasoning, and the scallop fettuccini is served with a Chardonnay cream sauce. Most of the meat, however, is unadorned by sauces. The steaks are helpfully available in two sizes, though, with all the sides, even the smaller, 12-oz. portion provided leftovers for this reviewer.

Soup or salad precedes every entrée, and despite the Las Vegas summer heat, my guest and I could not resist the soup of the day, French Onion. The broth tasted rich and hearty. Unlike other French onion soups, this version had shredded cheese and toast already cut up, rather than a solid layer of cheese and bread. The salad, as viewed from a nearby table, appeared to be a large bowl of iceberg lettuce. Although standard at many family restaurants, this salad did not seem on par with the quality of the other dishes.

After our seafood appetizer, we opted for house specialties for our entrees. My guest chose the 12 oz. New York strip steak. In his words, “I’ve only ever had a better steak in Texas.” The lean meat had just enough spice to bring out its full flavor. The steak was garnished with an excellent, yet sadly solitary, onion ring. Upon further inquiry, we discovered that onion rings are only listed on the bar menu, but can be requested as an appetizer or side dish in the main dining room.

While eating my entrée, the 12 oz. Smoked Prime Rib, I accidentally used the butter knife instead of the steak knife. The tender meat yielded just as easily, and it took a few bites to notice my mistake. With the extra jus, the prime rib proved a luscious dish with a mild smoky flavor. Both of our entrees were cooked medium as requested.

An afterthought order proved to be the surprise of the evening. When we had ordered, the waitress had suggested ordering sautéed mushrooms and onions with our entrees. By the time our meals arrived, we had forgotten about them, only to be remembered when the dish arrived a few minutes later. What a treat! The buttery, beefy taste of the mushrooms complimented our meat, while their earthy texture provided an interesting contrast to the beef. What seemed like a small addition was well worth the extra few dollars.

Dessert offerings ranged from a light Key Lime Pie to heftier offerings such as Tiramisu. My guest chose the Brownie Sundae. The brownie was perfectly moist with a large scoop of vanilla ice cream. This dessert was definitely large enough to share. I chose the Crème Brûlée Cheesecake. The name led me to expect a crispy burnt sugar crust, but the topping was instead more like caramel. The texture, in fact, was uncannily like that of the coating on a caramel apple. The cheesecake itself was very light and creamy, quite refreshing after the heavy meal.

Besides the restaurant itself, the Ranch House boasts a sports bar to the left of the main entrance. The bar and restaurant area are separated such that they almost feel like two separate establishments. Pennsylvania transplants will appreciate the regular showing of Pittsburgh Steelers games, and anyone looking for a good steak with their sports should find themselves happy here.

Most of the beer options are available in bottles, including Bud, Miller, Corona, and Foster’s, while Newcastle Brown Ale and Bud Light are available on tap. The Newcastle is a great deal at $3.50 a glass, and the dark, nutty flavor accentuated our beef quite well. The wine list focuses on major varietals that accompany strongly-flavored grilled meat dishes, including Cabernet Sauvignon and Chardonnay, but includes a range of other options to accompany any meal on the menu. There are several options by the glass, starting at the modest price of $4.50.

Bob Taylor’s Ranch House offers excellently-prepared, hearty food in a friendly atmosphere. We left full and happy, both for the tender meats and the sense of escape the restaurant provided. For the Las Vegas resident, the Ranch House offers the rare quality of being located neither on the Strip nor in a strip mall. For the tourist, it offers the chance to see a glimpse of Las Vegas past. Happily, the tradition of good steaks at Bob Taylor’s Ranch House seems a bit of the past that will continue for a long time. 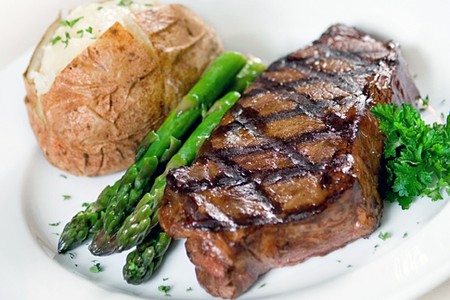 Do you take 'to go' orders?
Yes, the entire menu is available for "to go" orders.
How long have you been open?
Since 1955.
Do you serve lobster?
Only lobster tails.