While most travel to Las Vegas for the gambling, shows, and overall appeal of lounging by a pool in the balmy desert heat with drink in hand, there are those that seek to indulge in the plethora of dining choices during their stay. While you could stick with the basic buffet style breakfast, lunch, and dinner that seem to run rampant, it would be a great disservice to yourself and your travel buddies if you missed out on one of the best food and drink selections that Vegas has to offer. Located inside the MGM Grand and lead by James Beard award-winning chef Michael Mina, the Nobhill Tavern is unlike any place you’ve ever been before. Its classic tavern feel is paired with a sophistication that rivals any 5-star restaurant, and the fare is a perfect blend of American comfort and succulent seafood dishes that will transport your palate straight to the East Coast, where feasting on some butter poached Maine lobster is just another Friday night by the water. If you aren’t a seafood fan, fret not. Under main dishes you’ll find the American Kobe Burger which is served on their house-baked bun with onions sautéed in balsamic, cheddar cheese, and a “secret sauce” that will keep you guessing long after you’ve retired to your hotel room.

Whether operating under the name pub, bar, or tavern, this classic style of eatery is universally synonymous with casual comfort food and lively socializing.  With the newly revamped Nobhill Tavern, it now has the added association of the chic and sophisticated culinary vision of esteemed chef and restaurateur Michael Mina.  Featuring a cozily elegant décor, a menu of approachably refined bar snack staples, and an energetic soundtrack, Nobhill Tavern brings a neighborly sense of belonging to Vegas and promises to be a favorite hangout for locals and visitors alike.

To accommodate Nobhill’s new tavern identity, the restaurant has been redesigned to better facilitate bar mingling and casual conversation.  The lounge area has been expanded, greeting guests with a welcoming solid wood bar and an appealingly upbeat music selection of jukebox standbys.  New informal dining niches have been introduced: leather booths separated by cobblestone-printed screens offer more seclusion while equally sumptuous leather chairs congregate around low tables for a more communal experience.  The dining room offers a more traditional, though similarly unpretentious, dining experience with round, white-clothed tables and a relaxed ambiance.

The Nobhill Tavern menu also reflects a casual slant, with more down-to-earth prices and flavors than some of the Strip’s more fanciful culinary fare.  It was designed with a mind for the satisfyingly simple pleasures of classic pub food and bar snacks transformed with haute cuisine twists: homey standards become extravagant like the Maine Lobster Pot Pie with truffled cream, and straightforward comfort foods like Pork Chops and Chicken and Dumplings are given Mina-style flair with tableside saucing.

We begin our Nobhill experience with a Cable Car, the restaurant’s signature cocktail and ode to its San Francisco namesake neighborhood.   Served in a cinnamon sugar-crusted martini glass, this sweet, playful citrus cocktail conjures memories of orange creamsicles coupled with a decidedly grown up kick.

The Charcuterie board offers a tantalizing selection of meats including Jamón Serrano, Prosciutto Cotto, Dry-Cured Speck, and House-Made Paté.  It showcases the high quality ingredients used by the Nobhill kitchen: the gamey earthiness of the Paté, the slightly spicy Serrano, the Prosciutto’s smoky butteriness and the mild lightness of the Speck all contrast beautifully with one another.  A generous serving of the garlicky, herby Grilled Ciabatta with Rosemary provides a flavorful platform for sampling the meats, its slightly charred crispness accentuating their meaty smokiness.  It proves an excellent starter, well-suited to snacking and chatting.

The New England Lobster Rolls offer a deliciously traditional bite to please even the staunchest of culinary purists.  The creamy lobster mixture is piled high on soft halved mini rolls and crowned with micro cilantro for an abundantly appealing finger food.  The buttery, rich flavors of the generous chunks of lobster meat are accentuated by the slight sweetness of the bread while the creamy herbed sauce and cilantro zest impart a light, summery flavor.

The golden Beer-Battered Shrimp bridge the divide between familiar bar snack and epicurean innovation.  Four large crispy shrimps are paired with a delectable lime avocado sauce for dipping.  The fried shrimps are given surprising nuance by the addition of cumin seeds into the batter, adding a spiced zest to the sweet shrimp meat.  The sauce brightens the flavors of the shrimp with a citrusy tang and intensifies the shrimp’s irresistibility.

The BBQ Pulled-Pork Finger Sandwiches are a similar re-imagining of a classically homey dish.  Served open-face on small toasted bread rounds, the saucy shredded pork is topped with a dollop of corn pudding and mini Serrano chili pepper slices.  The flavors layer on top of one another and blend together for a full-bodied and complex dish: the sweet creamy corn pudding enhances the sweetness in the pork while the chili pepper heat creeps in and warms the palate.

The Bay Shrimp “Louie” highlights the talent of the Nobhill Tavern kitchen for delivering pure, unadulterated traditional dishes.  Pink shrimp, cherry tomatoes, avocado slices, hardboiled egg segments and curlicued green onions are cradled in a halved baby romaine lettuce head and amply drizzled with a classic Louie sauce which adds a horseradish spice to the crisp salad.  Overflowing with fresh and abundant ingredients, this salad is well-suited for sharing or as an individual meal.

The Cream of Broccoli Soup is served rustically in a miniature cast iron pot, accompanied by a dainty grilled cheese sandwich charmingly wrapped in a paper pocket.  It is little details such as these that make the Nobhill Tavern cuisine so appealing and approachable, presenting the delightful dishes in unique and disarming ways.  The flavors of the soup live up to the comforting promise of its presentation: the creamy freshness of the soup is punctuated by whole blanched broccoli florets and salty, smoky bacon chunks for a hearty and richly satisfying dish.  Dipping the grilled cheese triangle into the soup adds an additional sharpness to the broth and prompts thoughts of cozy childhood memories.

Immediately upon being delivered to our table, the massive Berkshire Pork Chop is treated to a generous pouring of apricot and mustard jus, which coats the meat and its Brussels sprout and cipolline onion accompaniments with a rich, fruity aroma.  The tender, gamey pork is well matched with the rich wintry spice of the mustard and the deep sweetness of the apricot.  The slight bitterness of the Brussels sprouts balances the pork’s heft and makes for a dish that is simply and unabashedly satisfying.

The Atlantic Salmon infuses a classic dish with unexpected flavors.  Served with a creamy Hollandaise sauce and green and white asparagus, the Salmon is an expertly executed version of a traditional fine dining flavor triad.  However, like the Pork Chop, the Salmon is augmented by its own tableside sauce: this time an earthy brown morel sauce.  The morels contribute robustness to the dish that cuts through the Hollandaise’s heaviness while simultaneously deepening and enriching the buttery flavors of the salmon.

The Chicken and Dumplings exemplify the warmth of Southern comfort food, featuring a generous half roast chicken and plump, doughy dumplings with a spooned over pea and garlic velouté.  It carefully balances textures and flavors: the thyme-infused, pillowy dumplings juxtapose beautifully with the crisp skin and moist chicken, while the velouté blankets the dish with pungent garlic and the slight sweetness from fresh peas and carrots.

Nobhill Tavern’s extravagant desserts hold their own amidst the parade of savory dishes that preceded them.  The Banana Sundae is a warm and gooey treat, filling the air with the sweet aromas of cinnamon, caramel and fruity bananas.  Bits of toffee add crunchy accents that contrast deliciously with the cool vanilla ice cream.
The Chocolate Layer Cake is the epitome of decadence.  It layers chocolate ganache with peanut butter crunch for a dessert that balances sweet with saltiness and creaminess with crunch for a pleasingly complex depth of flavor.  The cocoa nib ice cream that accompanies it intensifies the richness nearly gratuitously for an experience that is pure, unadulterated indulgence.

The unanimous favorite, however, is the Strawberry and Rhubarb Crisp.  The sweet, sugar dusted crumble crust is beautifully tempered by the tartness of the fresh strawberries and rhubarb for a summery and refreshing flavor.  A rhubarb foam contributes additional tartness and a culinary sophistication that elevates this dessert from its humble home-baked pie associations.  So too does the crème fraiche ice cream that melts delectably over the piping hot pastry.  It is an excellent conclusion to our Nobhill Tavern meal, embodying the restaurant’s skillful blend of familiar comfort food with the delightful culinary sophistications expected from a Mina Group restaurant.

Nobhill Tavern doesn’t stand on ceremony.  It’s the kind of restaurant where you don’t have to feel self-conscious about talking too loudly or about which fork you should use.  With lively music and a cozily refined interior, the restaurant is designed to put people at ease and to encourage socializing.  But don’t be fooled by the casual neighborhood vibe: Nobhill’s take on comfort food is anything but common place.  This is a Michael Mina restaurant after all. 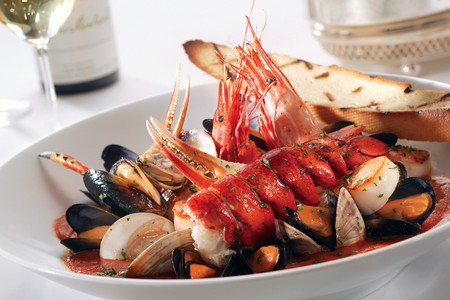 All Shellfish Served with Traditional Sauces