Tao, in the luxurious Venetian Hotel and Casino, has experienced great success in Las Vegas since opening in 2005. The menu full of “Pan-Asian” cuisine is quite diverse and features influences from China, Japan, Thailand, and Korea. The food is beautifully prepared and efficiently delivered with an extensive wine list and lengthy sake menu that encompasses hot and cold sakes to ensure that those who wish for something special have a large variety from which to select. In an expansive dining space featuring authentic Asian statues, live foliage and dramatic lighting, Tao effectively shows what exciting, beautiful dishes may be found, waiting inside the Venetian for the adventuresome diner to experience. Dinner is available seven days a week beginning at 5:00p.m.

Tao - A Taste of the Orient

Tao, located on the Strip, in the Venetian Resort Hotel Casino, is more than a restaurant.  It’s an institution – part nightclub, part restaurant, and all glamour.   Tao is known as a popular celebrity hotspot.  In an area where standing out from the other well-appointed restaurants— many headed by celebrity chefs—requires more than interior decorating and a gimmick, the food must be not only top-notch, but also very consistent.  Tao excels in this arena.

Tao opened its Las Vegas location in 2005, but its origins lay in New York.  Tao’s New York headquarters opened in fall of 2000, and continue to hold the same celebrity draw as the Las Vegas location.  The Executive Chef for the organization is Sam Hazen, who’s been featured on Emeril Live, and whose recipes have appeared in publications such as Epicurious.com and the California Avocado Commission website.  His travels in the orient, combined with his diverse restaurant background, have created a unique menu, irresistible to the American palate.

Approaching Tao, there’s a velvet rope with the requisite bouncer on the left, the side that enters the nightclub.  The entrance on the right is dimly lit.  Walking through a short corridor, there are four stone, bathtub-sized pools, each filled with rose petals with a lit candle in the center.  This doesn’t merely serve as atmosphere and ambiance, it also serves a function: if a line forms at the entrance, there is room for it.  The corridor leads to the front desk, where the host arranges the seating.

Near the front of the restaurant is the large bar area, as well as a number of semi-circular cocktail booths that together take about a fourth to a third of the entire space. Past the bar lies the restaurant.  The restaurant’s walls are red, with varied lighting and adorned with photos of sumo wrestlers.  On the back wall is the sushi bar, with approximately a dozen seats.  Another wall has glass cases of imported artifacts.   There’s also a 20’ Buddha in the center of the restaurant, whose lighting changes from blue to white, to red.  It also features a koi pond in front of it.

Tao is a feast for the eyes.  The table settings are simple and elegant.  Each table is set with a teapot, black linen napkins, and a silver tray, upon which leans a spoon and a set of teak chopsticks.  We dined at Tao on a Sunday evening, with an early reservation.  It was still nearly filled to capacity.  Tao seats 450, but the tables can be rather close.  It’s a big place, and when filled, it can be quite noisy.

Service for each table begins when the server delivers two china bowls, one empty, and the other filled with chilled edamame.  The edamame is tossed with mustard oil, thinly sliced shallots, and black sesame seeds.  These are, quite literally, worth licking one’s fingers.  They’re cold, and refreshing and savory.

Appetites thus whetted, we order our appetizers.   I order a glass of a 2005 Trinchero Central California Pinot Noir to go with our dinner, and hot sake as well.  Tao has a selection of more than 35 sakes, all except two served cold.  We begin our meal with the Yellowtail Sashimi with Jalapeño and Ponzu Sauce.  The knife skills of the sushi chef (Executive Sushi Chef: Koji Noda) are clear, the six slices are perfect—uniform, with sharp, clean edges.  Each slice of sashimi is topped with a thin slice of jalapeño, and the dish is drizzled with the savory sweet ponzu sauce.  Pickled ginger is served beside the sashimi, as well as shaved radish.  It tastes like the sea – the fish is so fresh, and the jalapeño is not overpowering.  Each component adds another layer to make a simple dish more interesting.

The next starter to arrive is the Tao Angry Dragon Roll with Eel and Kabayaki Sauce.  More traditional, this is a sushi roll with cucumber, eel, and black sesame seeds, topped with kabayaki sauce, and served with wasabi and pickled ginger.  The sushi is rolled and sliced beautifully, and it combines tastes and textures so that each bite explodes with flavor.  The point is apparently not lost upon the folks at Tao, as the tables are without salt, pepper, and soy sauce.  The food simply needs nothing else.

Our final starter is Crispy Lobster and Shrimp Dumplings with Ginger Jiang Kong Sauce.  Unlike the other two starters, the four dumplings are served with the sauce on the side, for dipping.  This is very rich, and tastes decadent.  It is served simply.  The dumplings are on a plate, and a decorative bowl on the plate contains the sauce.  The sauce is thin, savory, and effectively balances the richness of the seafood.  This is much heavier than the steamed dumplings but well worth it.

Already satisfied, our entrées arrive.  First, Braised Spicy Shrimp with Chive Flowers is placed in front of me.  The eight large, butterflied shrimp are placed on a bed of wilted chive flowers around a large mound of white rice.  This dish is as delicious as it is lovely.  The chives have absorbed the spicy-sweet braising liquid and still have their own flavor.  It’s not unlike eating wilted spinach, but more exciting and much more flavorful.  The shrimp are ridiculously large and meaty.  The chives, the braising liquid, the shrimp, and the rice all marry well.  It’s difficult to stop grazing on this dish.

Our final entrée is the Wasabi Crusted Filet Mignon with Tempura of Onion Rings.  It is set on the table and I frantically begin searching for a steak knife.  My companion looks at me then laughs.  Tao even slices the steaks before delivering them tableside.  The steak is on a plate, as well as a stack of tempura onion rings, with several chive flowers whimsically set in the onion rings, like a mock vase.  The rare steak is like butter, and the wasabi crust is subtle; once cooked, it loses its bite, and has a rich softness.

We accompany our entrees with Pad Thai Noodles.  An enormous pedestal dish is delivered to our table, with the noodles piled on it.  The noodles are packed with bean sprouts, eggs and nuts.  They’re a great accompaniment to all of the dishes we’ve tried, and none of their flavor jumps out to conflict with any of the ‘stars’ of our dinner.  Every dish we’ve had feels and tastes polished, as if it’s been practiced until it’s perfect, every time.

Herein lies the beauty of Tao.  The menu genuinely reflects the executive chef’s background, and the quality of the food shows an uncompromising commitment to consistent excellence.  Tao’s wine list features 200 wines, available by the glass, bottle, and large format bottle.  Their sake menu has more than 30 different sakes; all but two are served cold.  They also have a number of sake cocktails, and their famed TaoTini.  Tao is a busy, bustling place, but infinitely worth the trip.  It is fine dining like few other places.  Come to Tao. 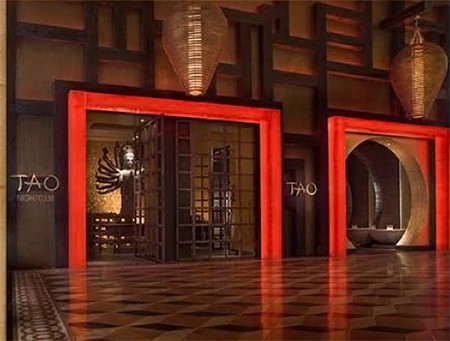 How far in advance does the restaurant accept reservations?

Tao Asian Bistro accepts reservations up to one month in advance.

Noble Treasures from the Sea

Food was amazing service was excellent.

I was especially looking forward to eating at this restaurant from all of the hype I had heard about it! I made reservations in advance, as one must. I waited 45 minutes after the reservation time for my table. When we finally were seated, we were next to a large party of obnoxious men chanting, singing, walking around and bumping into other patron's chairs and spilling their drinks. The staff did nothing to minimize the mess or annoyance. Although the service was good to us, the food was at best par, nothing memorable, and over priced. However, if you want to be in the trendy scene with music so loud you cannot hear the person sitting next to you, this would be the perfect place!

I made reservations over a month in advance. We showed up at a quater to 8:00 (our reservation was for 8:00), and we were told by the host our table would be ready in a few minutes. 30 minutes later we were still waiting. I went up and asked the host how long, and she said you are my next table. Another 15 minutes went by and we watched 3 other groups get seated. We ended up walking out an hour past our reservation time because we were so frustrated. At a bare minimum, they should have apologized for the delay. The one good thing I can say about Tao is they had Wasabi peas in the lounge. I had time to eat a whole bowl of them. We also used this site to make reservations at Top of the World. I would highly recommend them. Wonderful meal, great service, and a view that can't be beat.