The Buffet at LVH

Breakfast at the Buffet at LVH

The room that borders the buffet is dark and not what I would personally consider to be inviting. If the signs did not lead me in this direction, I would never guess that this would be the location of the buffet. My first impression is that the buffet seems a bit like an after thought.

It is early, before 9:00 a.m. when I arrive to find only one party of guests in front of me in line. I wait less then a minute before I make my way up the stairs to the entryway to the buffet.

As foretold by the location of the restaurant, the dining room is not much to behold. The décor is reminiscent of any number of diner style restaurants the country over. The wait staff is dressed according to the diner style of the décor. The LVH is not trying to show off with this buffet, in fact it seems like it is only here to serve guests of the hotel looking for a buffet, but who don’t want to leave the premises. Let me make this absolutely clear, the buffet at the LVH is not the kind of buffet to go out of the way for. It is for hotel guests not looking to venture all the way down to the heart of the strip to grab a bite to eat.

Taking a look around at the offerings, it becomes clear immediately that this isn’t a showcase buffet. The complete buffet is the size of the salad bar at all of the other buffets I have been to. The center island hosts an omelet bar and the desserts. One side of the buffet has salad offerings, lettuce, tomatoes, onions, croutons, dressings, and other items. The opposite side has fruits and melon. The standard buffet offerings are here, watermelon, pineapple, cantaloupe, honeydew, and fruit like apples, oranges, and assorted berries. The long wall on the far side has a large bread offering, eggs, biscuits, pancakes, and a number of other main dishes.

I take a seat and order a coffee and water before heading off on my first run. The buffet is set up in a single room, and with no one in line for the omelet bar, I step up. I order “the works”, which in this case means mushrooms, red and green peppers, onion, ham, and a mixture of cheddar and jack cheese. The omelet cook professionally flips my omelet and serves it up, hot from the pan. As I make my way around the few offerings, I spot a pan of blintzes. I am a sucker for blintzes, so I grab a couple of the pastries. The large pile of bacon pile sitting next to the blintzes is too tempting to pass up, so I grab a few pieces and put them on my plate.  Browsing the toast offering, and not seeing anything remotely similar to sour dough, I grab a slice of wheat toast.

My coffee is waiting for me on my return, and it is not what I consider good coffee. It has a weird nutty tone and is a bit on the acidic side. It is far from the worst I have had, and it is passable, but I would not go so far as to calling it good.

The omelet however is good. The ingredients are cooked properly, allowing a fine level of complexity to come through. The vegetables are fresh, and the cheese is melted perfectly. The omelet and the toast go together, like an omelet and toast.

The cheese blintzes are warm, crisp, and creamy. They have a good size to them as well. The ends squeeze hot cheese as I take a bite. It is a little messy, but well worth it. The thin slices of bacon are crisp and greasy, but in that shiny, delicious way. This is nowhere near the fresh cut slab bacon featured at premium buffets, but for what it is, it is a winner.

On round two, I see the French toast, and start the plate off by grabbing a slice. I bypass the standard syrup, which here is more than likely not made from maple, and go for a scoop of apple cinnamon topping. I figure apple and cinnamon on French toast seems like a good combination. A pan of sausage is nearby, and I grab a couple of links, although they don’t look all that good. I also take a small spoon full of corned beef hash and some “scrambled eggs”. I use quotes here, because as I raise the spoon from the warming try, an awful lot of water comes off these eggs. I am already half way to plating, so I figure I would give it a shot anyway.

The French toast is okay. The toast itself is bland and not fresh, but the topping helps. I expect the apple topping to be sweeter, but it is a little bland. It looks like it has cinnamon in it, but it does not take as if it does. The sausage tastes like I thought it would, generic and not bland. The corned beef hash tastes and looks like it is straight out of a can. The eggs, as I expected, are powdered and gross. This round is a loss.

Going by what I have experienced thus far, I know that dessert is not going to be a sweet finale to this meal. That is not going to stop me from giving it a go though. I am here, so I might as well see what the LVH Buffet has to offer when it comes to the sweet stuff. There are a number of cookies, small pastries, and puddings, but none of these look the least bit appealing. Finally, after taking two laps around the island containing the desserts, I settle on a couple of cookies and a cinnamon roll.

As I expected, the cookies taste like something bought at the store, but not name brand. They are dry, and do not seem to be made with much care. The cinnamon roll, although it is freshly baked, is terribly dry. I take a bite from the outside, and the edges are dry and unpleasant. Rather than finishing the entire roll, I take it apart in order to eat the coveted center of the roll, but even that is dry.

I make my way out of the buffet more than a bit disappointed. I have been to some of the premier buffets in Vegas, and this is not even in the same ballpark. I do not even know if this is in the same town as the premier buffets in Las Vegas, I mean, literally it is, but figuratively speaking, no way. Considering what LVH is charging for the Buffet, it is a real let down. For those who are hungry, are guests of the hotel, and just do not care, it serves its purpose. I will admit, the children running about seemed to be enjoying themselves. The adults however all seemed non-plussed. I share the sentiment of those people. I cannot recommend the Buffet at the LVH for anyone staying outside the hotel. 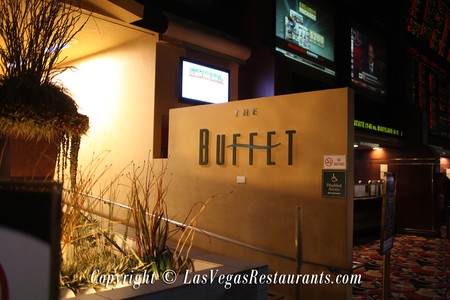