Top of the World

The Top of the World is located in the Stratosphere Casino, offering a one-of-a-kind bird’s eye view of Las Vegas. Perched 844 feet above the city, Top of the World literally revolves in place, rotating a full 360 degrees every 80 minutes. And while the spectacular sights are enough to get guests in the door, the restaurant’s inspired menu of re-imagined classics keeps the dining room full. Executive Chef Jeff Giffen oversees menus constructed around fresh seafood, prime-cut steaks, and decadent specialties. With tasting menu options and private dining accommodations, Top of the World serves up a generous helping of ambiance with every meal.

Romance, Red Wine and So Much More

Top of the World opened more than ten years ago, and has had few changes from its foundations since then.  The restaurant was originally headed by Executive Chef Stephen Wolff; however, it is now guided by Executive Chef Mario Andreoni, who’s been honored numerous times for awards here in Las Vegas.  His reputation is solid among chefs, though he’s commercial and thus less visible than some of our other chefs here in town.  His Italian heritage, French culinary training, and travels in the Dominican Republic have combined to create a classical menu with balance as well as diversity.  Andreoni’s cuisine is a perfect accompaniment to the restaurant and scenery around it.

To enter Top of the World, there’s a velvet rope and a podium at the bottom of the Stratosphere, where a formally dressed staff member checks reservations, and directs diners into the foyer.  Toward the left, the staff guides the uninitiated to the elevator that delivers them to the upper eschelon that is Top of the World.  A helpful elevator operator warmly greets diners, and tosses out Stratosphere facts, such as that the elevator is traveling at a crisp 20 miles per hour.  In less than 30 seconds and more than 105 floors, the elevator doors open and the elevator empties into the Romance Lounge, one floor above the restaurant.  The view, encompassing both the restaurant and surrounding valley, takes one’s breath away.  This floor is also where the main desk lies, where hosts and hostesses verify reservations, then direct diners down a flight of stairs, and wait staff courteously guide diners to their tables.

There really are no ‘bad tables’ at Top of the World.  Unless one has a particular aversion to restaurants that rotate, every table has a spectacular view.  As the sun begins to set, blinds are lowered to keep it out of diners’ eyes.   The entire restaurant is a circle – kitchen, bar, and all functions are on the inside, and tables are on the outer rim.  Looking at the floor, it appears that only the outer rim rotates, and the inner, working parts of the restaurant are firmly stationary.

Top of the World is an old school, classy, beautiful place to dine.  The colors are rich, the carpeting is a deep burgundy, and the restaurant rigidly adheres to the Stratosphere theme.  Everything, from pats of butter, to desserts, to the plates beneath them, is adorned with the image of the Stratosphere tower.  The tablecloths are a sparkling white, and the plates are white with burgundy.  The table settings are complete – not a piece of silverware nor a plate is absent.  We dined at Top of the World on a Sunday evening with an early reservation.  It was very quiet and intimate.  It’s easy to see why Top of the World has built a reputation as a romantic place to dine.  The atmosphere oozes romance and whispered conversations.  For being a relatively confined space, Top of the World feels very roomy and open.

I’ve asserted before that any dining experience and food are only as good as those who serve it.  The servers at Top of the world take special care to ensure that each diner’s needs are met.  Whether it involves bringing additional silverware, making menu recommendations, or mentioning the restaurant’s soccer team, their service staff is extraordinary – each member of the team with whom we have contact is friendly, competent, and expedient.  Some have also been with the restaurant for a number of years, which is not necessarily common in our transient service-oriented environment.

Service for each table begins when the server delivers bread and butter.  Each pat of butter is literally shaped like the Stratosphere.  It’s a nice touch, and makes something as simple as bread and butter suddenly memorable.

While snacking, we order our appetizers.  All items at Top of the World are served a la carte, although couples may wish to indulge in the prix-fixe three- or four-course dinners for two.  Accompanying the menu, Top of the World’s wine list features 215 wines, available by the glass and bottle. I order a glass of a 2004 Jacob’s Creek Reserve Australian Shiraz to accompany our dinner.

We begin our meal with the Lobster Bisque.  The soup is thick and creamy, and served simply.  Its tomato base provides a sound foundation, and the lobster lends a richness that few other ingredients can.  The cognac in the bisque gives it a depth of flavor that distingushes Lobster Bisque from other, simpler soups.

The next starter to arrive is the authentic Caesar Salad.  This is a traditional Caesar, with Top of the World’s house-made dressing.  The romaine is crisp and fresh, gently tossed with the dressing.  It is topped with a homemade crouton.  This salad is so fresh and simple that even my children, picky diners that they can be, cannot get enough of it.  Good food simply speaks for itself.

Our final starter is the Stuffed Portabella Mushroom.  It is served very simply – one medium-sized stuffed mushroom centered on a gleaming white bowl, with sauce drizzled atop it.  The mushroom is stuffed with croutons, gorgonzola cheese, and pancetta (Italian bacon).  This is very rich, and tastes decadent.   The sauce is thick, savory, and much like a gravy.  This is a heavy dish, with visual impact, if a bit scant on portion size.

Already satisfied, our entrées arrive.  Top of the World’s menu has helpful suggestions for wine pairings with each entrée, for those that might wish for a little help.  First, Lobster and Crab Ravioli is placed in front of me.  The large, stuffed ravioli are served in a white bowl.  They’re served with a brandy lobster sauce on top, as well as a baby lobster tail.  There’s not much ‘muss and fuss’ in terms of garnish.  This is a rich, flavorful pasta dish with an abundance of lobster, a great, creamy, tomatoed lobster sauce.  The baby lobster tail is difficult to part with – who really wants to share?

Our next entrée is the Muscovy Duck.  It is set on the table and I pause and drink it in, both with my eyes and my nose.  The sliced duck breast is on a plate, accompanied by slices of apple, and a wealth of peppercorns, in a flavorful fig port reduction.  My only criticism of this dish: it’s wonderful, but bears little resemblance to the menu description.  The combination of duck, fruit, and wine is always a good pairing, though, and the sweet and savory reduction is merely a memory by the time we finish this dish.

Our final entrée is the Prime Rib.  It may be a staple to all diners in Las Vegas, but a really well-prepared prime rib is as different from a mediocre one as night from day.  The perfect white and burgundy plate is delivered with a large, more than half-pound slab of rare meat on it, precisely cooked as ordered.  The Angus Beef has been crusted in pepper and herbs, and slow roasted.  This is served with a simple jus and a mild horseradish sauce.  The beef is tender, and the herbs not fussy.

We accompany our entrees with Potato Au Gratin.  A serving bowl filled with piping hot potatoes is set upon our table with our entrees.  The sliced potatoes are cooked with Gorgonzola, Parmesan, Provolone and Romano cheeses.  They’re heavy, rich, a fabulous comfort food, and are a sound accompaniment with several of our entrees.

Top of the World’s desserts in particular deserve special mention, specifically the Chocolate Stratosphere.  It is as visually impressive as it is decadent, with the Stratosphere Tower filled with chocolate mousse and served tableside with cascading vanilla sauce.

Our meal was solid, and all of it was very good, but Top of the World is not only about the food.  It is about atmosphere, romance, and quality of food, all combining to create a perfect moment.  The kitchen demonstrates a commitment to serving classics, and preparing them perfectly, every time.   Come to Top of the World for the view, and stay for the food, and the intimacy.

Make your next event unforgettable in Top of the World’s extended private dining rooms. Impress your guests with breathtaking views and upscale gourmet cuisine. Private service staff, a personal bartender, customized menus with on-the-spot entrée selection, VIP entrance to the tower and complimentary access to the observation decks are just some of the advantages when you book a private dining event with Stratosphere's catering and private dining office. 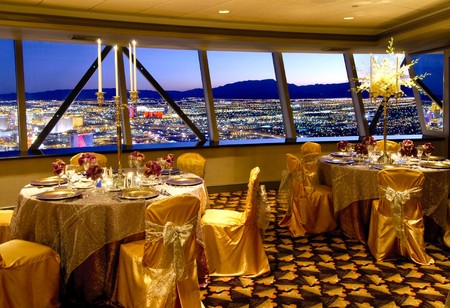 Are baby's allowed in the restaurant?
Yes.
Do you offer a fixed price menu, can you send it to me. do you have a private room for 16 people
Yes, private rooms offer special menus along with breathtaking views of Las Vegas. For parties of 10 or more contact group reservations by calling 702.383.4777 or email at [email protected] (Monday through Friday, 8am to 7pm and Sunday 9am to 7pm).
what is the dress code
The dress code is business casual. No sports or beach attire allowed.
Do you have wheelchair access?
Yes.
Do you have gift certificates that I can purchase?
Unfortunately, Top of the World does not offer direct gift certificates. But The Stratosphere Hotel does offer a gift card that can be purchased through a hotel concierge and they can be used at Top of the World restaurant.
I assume you have high chairs? Do you have a childrens menu
Top of the World does supply high chairs, however they do not have a children's menu.

All cold sandwiches are served with potato gaufrettes and petite green salad.

All hot sandwiches are served with either Yukon gold French fries or a petite green salad.

Served with either Yukon gold French fries or a petite green salad.

All steaks are seasoned with French sea salt and served with your choice of roasted fingerling potatoes or Yukon gold mashed potatoes. Choice of one topping.

All events are catered under the direction of the Top of the World executive chef. Whether you prefer pre-planned menus, customized menus, or on the spot entrée selection for your guests, you are guaranteed gourmet choices (including vegetarian dishes). Complement the meal with upgrades like specialty linen, musicians or DJs, menus customized with your company name or logo, discounted group thrill ride passes (great for team-building exercises), or custom floral arrangements. To discuss how we can make your next event unforgettable, regardless of budget, please call us at 800-789-9436

All steaks are seasoned with French sea salt and accompanied by oven roasted yellow and green summer squash.

I had to cancel a reservation last minute due to travel delays and the individual who answered the phone was very rude. They asked if I was told that I had to cancel before a set time in the day and I told them no. They then looked up my reservation and told me I had been told even though I had not. I looked through all documentation regarding the reservation and looked through the website and did not see anything about canceling by a particular time. It was already disappointing to have to cancel due to travel delays and the rude demeanor of the person I spoke with was very upsetting.