Blair's in Silver Lake is just the sort of wine bar and restaurant that you would expect to find on a Manhattan street corner. Fortunately, you only have to travel to Silver Lake to find upscale comfort food paired with an excellent beer and wine menu in a cozy candlelit atmosphere. The crowd is a mix of neighborhood regulars, Hollywood starlets looking for somewhere low key and off the beaten path, and hip Silver Lakers meeting up for a drink and snacks at the bar before a night out.

As we pulled up to Blair’s we were beckoned by what appeared to be a beacon of light in an otherwise dark neighborhood.  Fairy lights woven through tall trees stood welcoming outside the subdued interior. When owner Marshall Blair, formerly of the Water Grill, opened Blair’s he successfully turned the quiet corner of Rowena and Herkimer into a destination.

The location was once home to a Thai restaurant oddly known for its cheeseburgers, but that was when Silver Lake was more quirky and raucous.  Blair’s is reflective of wealth coming into the neighborhood and creating a demand for more high-end dining.  By day, the neighborhood is dominated by the sound of children running around the playground at Ivanhoe Elementary School, and their mothers shopping at the sprinkling of boutiques.  At night, the block belongs to Blair’s.

Inside, we shed the cares of the day at the cozy bar while drinking a glass of Roederer Estate sparkling wine and taking in the warmth of the candlelight and terra cotta walls.  Save for a large bouquet of exotic flowers and a few tasteful paintings, the minimal décor relied mostly on giant mirrors that served to make the small rooms appear grander and made for great people watching from the bar.  The restaurant was buzzing with conversation and activity as people were crowding in.  Mr. Blair was running around speaking to customers, helping out at the bar, and coming out of the kitchen with plates.  The Friday night dress code ranged from flip-flops to ties and we felt right at home in the casual, friendly atmosphere.

We were soon led to our table in the next room where we were bumping elbows with diners behind us (we were hoping to bump elbows with Johnny Depp but weren’t so lucky).  Luckily we had the lovely menu to take our attention away from whom we were sat between.  It was interesting without being pretentious and offered hearty California cuisine.  There were many standards including Beet Salad with Goat Cheese, Tuna Tartar, and Short Ribs, and more adventurous dishes such as Halibut with sausage and piquillo peppers in sunchoke broth. The server informed us that the fish is wild whenever possible, the produce is fresh and often organic, and the meat comes from grass fed Colorado beef and lamb.

For our starters, we ordered the Yellowfin Tuna Tartar with Cucumber, Avocado, and Spiced Ginger Vinaigrette as well as the Shrimp Cocktail and Dill Deviled Eggs, which we paired with a crisp, lemony Sylvaner.  The Tuna Tartar was an excellent choice.  The fish tasted very fresh and was mixed with avocado and sesame dressing and topped with a wonton crisp.  A bright orange drizzle of house-made chili sauce brightened the plate and added a subtle kick.  The Shrimp Cocktail was a simple dish that included four medium-sized prawns with fresh horseradish cocktail sauce along with two deviled eggs.  The prawns were predictably delicious, but as a fan of deviled eggs, I was disappointed to find there was goat cheese in Blair’s particular recipe.  Call me a purist…

Mac and Cheese is all the rage right now, with good reason.  Blair’s “grown up” version, Truffled Mac and Cheese, was exceptional: fresh pasta cooked to order with fontina and black truffle oil.  The earthiness of the truffle oil against the tangy cheese was luxurious and addictive.  For this and the remainder of the meal, we settled on a bottle of the lush Turley Zinfandel after a glowing testimonial from our server.

After much deliberation, for our main course, we decided to share the Braised Colorado Short Ribs with Soft Sage Polenta, Breaded Leeks, and Veal Jus, and house-made Sweet Potato Gnocchi with Wild Mushrooms, Wilted Watercress, and Yam Coulis. We had been told that the short ribs were a Blair’s classic. Resting atop a mound of soft sage polenta, the beef short ribs were rich and flavorful.  The meat had been braised for four hours with fresh herbs and spices and fell right off the bone.  Breaded leeks, much like a small portion of stuffing, adorned the dish and added another layer of flavor.  The sauce was a delicate veal jus.  I was quite impressed with the short ribs and will subsequently be dreaming of them until I return to Blair’s.

The gnocchi were faintly sweet pillows against hearty wild mushrooms and yam pureed with vegetable stock.  The watercress was a nice fresh and light companion to the dish.  On top were large shavings of manchego cheese that were a lovely savory pairing to the sweetness of the gnocchi.  We learned that the gnocchi can be prepared for vegans without the manchego and would still hold up as a well-rounded special meal.

Finally, it was time for my favorite course.   Blair’s has a chef dedicated solely to dessert and my expectations were high.  The Vanilla Cream Donuts with Espresso Ice Cream have reached fame status around the neighborhood so they were the obvious choice.  While we waited for our donuts to be made to order I sipped on a perfect cappuccino.  The espresso had a deep rich flavor and nice creamy foam. Our server told us that Blair’s serves Intelligentsia espresso.  The donuts arrived glistening and hot.  Cold vanilla custard speckled with vanilla bean oozed out from the middle as I took my first bite.  The pastry was light, slightly crisp on the outside, fluffy on the inside, and just sweet enough.   On the side were two small scoops of creamy espresso ice cream escalating the memories of coffee and donuts to new, elegant heights.

Blair's has neighborhood restaurant charm.  Throughout our meal the service struck a balance between friendly and professional.  Our sweet, casual server still managed to be extremely knowledgeable about the menu and changed my silverware without my notice.   We did have to wait a bit for our table even though we had a reservation. The timing and attention seemed laid back and at times the noise and crowdedness of the restaurant was chaotic. I suppose those seeking a quiet romantic dinner date may want to come on a weekday. Then again, the high energy gave the impression that Blair's was the hot place to be.  Pair that with classy comfort food and I'm in. 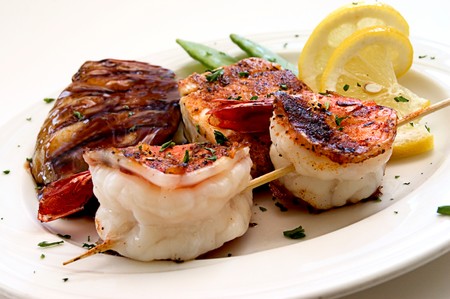 Do you serve any cheeseburgers?
Just one is on the menu, the Angus Burger with arugula