Veterans of the Los Angeles dining scene since 1981, Mary Sue Milliken and Susan Feniger have garnered national acclaim and multimedia stardom with their modern approach to Mexican cooking. Throughout their ascension, the duo has managed to keep their Santa Monica flagship vital. A magnet for both tourists and locals, Border Grill showcases colorful murals and plentiful portions of equally vibrant Mexican cooking. With encyclopedic menus and daily specials, ordering can be daunting, but regardless of the selection, the dishes are consistently flavorful. The duo’s attention to detail lasts through dessert, with house-baked cakes and strong, spice-infused café de olla.

Chefs Mary Sue Milliken and Susan Feniger partnered on their first Los Angeles restaurant in 1981. A quarter-century later, their initial passion is still evident at their flagship restaurant, Border Grill – in the colorful murals and on the modern plates, where large portions of soulful Mexican food still dazzle palates. The duo opened Border Grill on Melrose in 1985, but it proved so popular, they moved west to Santa Monica in 1990, adding square feet and upgrading their concept, from simple taco-stand fare to modern Mexican cuisine. By the turn of the century, Milliken and Feniger expanded their burgeoning gastronomic empire to include Latin restaurant Ciudad in downtown Los Angeles and a second Border Grill in Las Vegas. Since 1995, the duo has completed a 400-episode run on Food Network as the “Too Hot Tamales,” co-hosted a radio series, and written five cookbooks. Amazingly, Border Grill remains vital.

Border Grill is situated only one block from Santa Monica’s Third Street Promenade, surrounded by trendy shops and restaurants. Given the restaurant’s vibrant atmosphere and central location, Border Grill has mass appeal, drawing tourists in droves, but also spice-hungry Westsiders and during the week, Santa Monica office workers.  The cavernous space features lively murals on the walls and ceiling, with themes ranging from mariachis (black and yellow) to space travel (black and blue). There’s a bustling bar scene, a communal table near the entrance, and twin dessert cases, with a pastry station visible from the street. There are two seating options – upstairs and downstairs, although I prefer the latter. The compact space upstairs feels a bit claustrophobic, with a louder noise level and warmer temperature. Regardless of where you sit, the ambient music is standard lounge techno, with no hint of the restaurant’s Latin heritage. Each table features a candle holder plastered with an old Mexican movie poster, a nice touch. Modern glasses and plates sport colorful rectangular patterns.

As soon as we were seated, a busboy served us a bowl of warm, airy tortilla chips with a trio of salsas: chipotle, tomatillo, and verde. The deep red chipotle packed a wallop, while the other two salsas offered milder satisfaction.

With encyclopedic menus and daily specials, ordering can be daunting. I was intrigued by each of Border Grill’s three ceviches: ono, sea bass, and shrimp. Happily, for nearly the same price as a single ceviche, Border Grill offers a three-ceviche sampler, served on a single plate with fresh-cut avocado and corn tortilla chips to cradle the fish. The Ono arrived in the form of sashimi-like cuts, marinated in citrus juices, Serrano chile, and a puree of rocoto, a Peruvian chile pepper. The silky slices of fish were topped with thin ribbons of cucumber and onion. The Sea bass and shrimp were both diced and served in decorative shot glasses. The bass was mixed with yellow chiles, ginger, lime, red onion and diced tomato. Shrimp tangoed with cucumber, red onion, cilantro, jalapeno, tomato and citrus juices. Ono had the spiciest bite, but the other two ceviches were still solid.

The decision was no easier with the entrées, known as “special plates.” Since we split the ceviches to start, my dining companion and I both ordered meats. The Grilled Pork Porterhouse was slathered in a smoky chile garlic sauce and served with citrus-braised red chicory and a whole onion, cored and stuffed with potatoes, chorizo, and rajas – roasted chile strips. The onion was capped with cooling queso fresco. The Grilled Turkey Plate was an original take on Thanksgiving dinner. Juicy char-grilled turkey breast slices came topped with caramelized onions and cracked pepper sauce, plated with pureed honey lime yams and bitter greens. The portions were massive; each entrée could have easily fed two people.

Border Grill features a mind-bending number of drink options, including almost 50 tequilas, ranging from sip-worthy “alejo” to mixed-drink friendly “plata,” plus numerous wines and beers. Since I was dining at a Mexican restaurant, at least one of our drinks had to be a margarita. Specials partnered cucumber with honeydew, and ginger with pomegranate, but we ordered the black cherry version, made with Sauza Hornitos tequila – aged in a wood barrel for over a year – Grand Marnier, and fresh-squeezed black cherry juice. There was the choice to order the margarita straight, on the rocks, or frozen. Frozen was the right call, blended like an alcoholic Slurpee, with the rim of the glass lined with salt to counterbalance the sweetness of the black cherry juice. There were also some intriguing non-alcoholic options, including fresh pomegranate lemonade and the Mint Lime Cooler. I selected the latter, a refreshing virgin mojito, containing muddled mint leaves, simple syrup, lime juice and soda water, served on the rocks.

Upon entering the restaurant, I had encountered side-by-side dessert cases, one holding cakes, the other housing cookies and brownies. All meal, those sweet images replayed in my mind, so that by the time our waitress arrived with the dessert menu, I didn’t even need it. I bypassed out-of-place options like banana cream pie and Key lime cheesecake in favor of a dessert with more Latin flavor: Tres Leches Cake. The towering slice of yellow cake was soaked in condensed milk, whole milk and nonfat milk, then topped with a half-inch slab of whipped cream. The radiant plate featured passion fruit and prickly pear sauces, bright yellow and purple, dusted with powdered sugar and garnished with mint leaves. We also ordered a dry, macaroon-like paja cookie, molded with shredded coconut and flecks of apricot, chocolate and walnut. The best after-dinner treat turned out to be café de olla, a spiced Mexican latte seasoned with cinnamon, clove, allspice, orange and piloncillo sugar. The hot, complex beverage was crowned with froth and a cinnamon stick.

Mary Sue Milliken and Susan Feniger may have expanded their interests, but they’ve done a great job at maintaining the focus at their flagship enterprise. As long as the partners continue to evolve and update the menu and remain involved with the operation, I wouldn’t be surprised if Border Grill delights third and fourth generations of Angelenos. 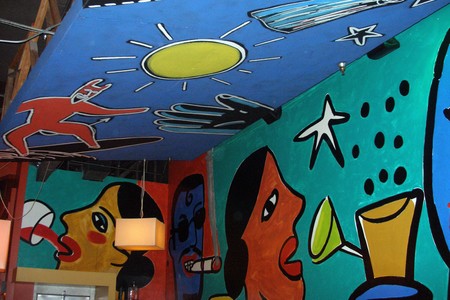 What is your Quick Lunch?
The Quick Lunch features a different dish each weekday for $10, served with a green corn tamale and choice of soda or iced tea. The meal is available to-go or at the bar and is prepared quickly for those on a short lunch break.