La Bohème rhapsodizes with a quintuplet of dazzling crystal chandeliers looming majestically overhead in a large, yet intimate two-tiered dining space. The semi-private booths downstairs and the rock star booths upstairs, along with the opulent ruby-red décor glimmering softly under the glow of two huge open fireplaces make this seductive bistro one of the a romantic destinations in L.A. Guests are also welcome to dine on the Garden Patio, Café La Boheme’s own al fresco paradise, where they can bask in the warmth of a beautiful fireplace framed by roses and greenery. For more casual diners, the bar lounge offers a separate menu of tasty treats like the crispy fried calamari with Serrano aioli. This longtime retreat from the bustle of Santa Monica Boulevard boasts moderate prices and a globe-trotting menu that sweeps culinary terrain from comfort food to exquisitely sophisticated dishes. Executive Chef Christine Banta enhances her Californian Mediterranean cuisine with European and Asian flare, creating favorites like savory Japanese Pumpkin Ravioli and Ahi Tataki, while specialties like the Red Caviar Spaghetti, the Lobster Saffron Risotto, and the Berkshire Pork Chop offer a fine balance of familiarity in flavor and innovation in vision. Come to Café La Boheme, where patrons will receive a warm welcome, excellent service, and unrivaled cuisine. Be prepared to stimulate all of your senses at this prime establishment.

An LA Story for Almost 20 Years

Arguably, different time zones use different measures of time. For instance, a New York minute is much shorter than an L.A. minute, or a cell phone-anytime minute. Regardless of location, when a restaurant thrives for 18 years, that's a feather in its cap. That feather is huge, indeed, if the establishment can stake that claim in the rapidly shape-shifting, restaurant-centric L.A. scene. That is exactly why we must stick a huge feather in the La Bohème chapeau. They're in their 19th year of operation -- an imposing feat in a city whose historic buildings, as Steve Martin irreverently and hilariously exaggerated in “LA Story”, are only around 25-years old.

This easy-to-find eatery is nestled into a storefront along L.A.’s well traveled, and world famous (thank you, Sheryl Crow) Santa Monica Boulevard, in the West Hollywood section. Kozo Hasegawa, the owner and motivational force behind La Bohème, is a mover and shaker not only in the L.A. restaurant scene but also in his native Japan where he owns seventy restaurants. His L.A. staples include Gonpachi, Monsoon Café (in Santa Monica), and La Bohème.

As she did at Hasegawa’s other L.A. restaurants, designer Margaret O’Brien has created a mesmerizing space, at once opulent and comfortable. Five grand chandeliers suspend from the high, wooden-planked ceiling into the sunken-level dining space below, and softly illuminate ruby-red walls punctuated by two huge open fireplaces. The high walls make for low-decibel dining, which is another plus that enhances the intimate ambiance. Along two of the walls there is a contiguous series of curtained alcoves, each one with a central table paralleled along three of its sides by a plush leather banquette; each alcove also sports a beaded curtain to allow diners the option of. Cantilevered directly above the main-floor alcoves is a balcony lined with several additional dining alcoves. These balcony alcoves sport an even more intimate look. Each one is lushly appointed with white chairs and affords a marvelous panorama of the dining area below, while ruby-red curtains drape down each side. Besides these seating options, there’s also an outdoor patio area sexily illuminated and enticing, and framed with ubiquitous flowers and greenery. The patio is also used as a segregated space for private parties. Guests rapidly discover that, despite being engulfed in lavish digs, pomposity and pretention are absent.

Appreciation begins at the hostess station, where Michele greets each guest with a sincere smile. The entire staff is down-to-earth, knowledgeable, and accommodating. Each member skillfully shares insights and views on the restaurant, food preparation, personal preferences, nuances of the various dishes, etc. In a nutshell, La Bohème fields a team of professionals that cheerfully conveys a sense of joy in its métier, as well as a refreshing sense of accountability and pride in its workplace. Just as the play’s the thing in theater, food and libations are the thing in gastronomy. And under the leadership of Executive Chef Christine Banta, La Bohème shines in these all-important categories.

The wine list has considerable reach: a couple dozen wines, mostly from California, are offered by the glass, and some 90 bottles are available either by the bottle or by the half-bottle. While many of the selections are Californian, the list also features several imports from France and Australia. Besides wine, there are several interesting signature cocktails. I recommend the Cantaloupe Martini: a liberating mixture of Absolut Mandarin vodka and melon liqueur splashed with orange juice and lime juice.

Menu choices sweep through an impressive swath of culinary terrain, with a decided lean toward Asian and French traditions. Among the appetizers are the Steamed Chicken-Mushroom Dumplings -- five plump coquille-shaped dumplings on a large white oblong dish. Golden-browned at the center, lucid white at the tips, the tender pockets of dumpling waft steamy sweetness from a fluffy, colorful bed of orange carrot strands and green watercress. The natural juices and crunch of the veggies complement the smooth texture of the dumplings as they release their earthy payload of chicken and mushroom.

The Chef’s fresh ingredients and ground-to-table philosophy really sing in her salads. The Asian Pear Salad adds the lively, almost musky, power of potent Roquefort blue cheese to the concentrated perk of dried cherries and the dulcet crunch of candied pecans. The fruit delightfully fills out this bouquet of tastes and textures. The Roasted Beet Salad beckons with colors: the scarlet-red beets, the deep moss-green fresh avocado, and the beige-white fresh trout. Slices of trout and avocado pedestal atop the beets, and the power trio of components is drizzled with a champagne vinaigrette that makes the ensemble harmonize marvelously.

The Pasta and Risotto menu section dips deeply into the Japanese tradition. In the Japanese Pumpkin Ravioli, the Chef deftly sweetens puréed pumpkin, avoiding the heavy-handedness that besets inferior versions. Brown butter and brown sugar team in a sweet sauce that clads the ravioli. The Red Caviar Spaghetti plates a panoply of Japanese favorites: red sushi grade ikura, nori, julienne scallions, and bottarga, with spaghetti in an unusual dish. The Lobster Saffron Risotto and Pad Thai Noodles provide some other choices in this category, as well.

Entrée selections split evenly between meat and sea, and there’s also a vegetarian creation: Sesame Crusted Tofu Steak. Carnivores might like to try the Braised Lamb Shank. Perched atop a large white ironstone plate, the lamb shank towers above a creamy white puff of polenta. Redolent of rosemary, the fork-tender reddish meat is slathered with a spicy lamb braising jus that pools in the periphery of the plate.

Lastly, Chef Banta makes all the desserts. I recommend the Crème Brûlée or the Boffo Chocolate Cake. In her five years at La Bohème, Chef Banta’s mastery in creating coherent dishes that blend and fuse Japanese and French cuisine obviously pleases most of the people most of the time. She can never strike an item from the menu without protest. In fact, some of the items on this menu have been here for almost five years. That’s a true accomplishment in restaurant circles, especially in LA. 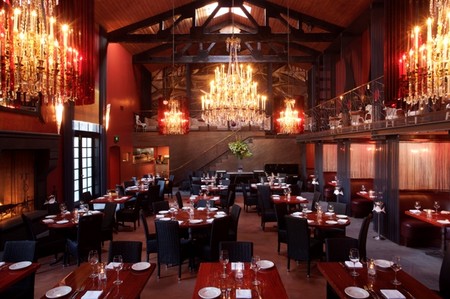 Can we bring a bottle of wine?
Yes, Café La Boheme is a BYOB restaurant, and charges a $20 corkage fee.
What’s the dress code?
The restaurant has a ‘casual elegant’ dress code. Suit jackets and collared shirts are recommended for men, and skirts and dresses are recommended for women.
kind of food do they have?
Café La Boheme offers a California/American Cuisine menu.
do you have a private room that can host 30 people for a birthday dinner?
They do not have a private room, however, it is possible to reserve the terrace and that will seat up to 35 people.

Wine by the Glass

WINE CELLAR MONDAYS Half Off All Bottles of Wine No Corkage | Special Flights Corkage policy: We will gladly open your wine that is not on our wine list. The fee is $20.00 per 750ml. bottle. There is a 3 bottle maximum per table or party

Enjoy a flight of 32-oz tastes of our specially chosen wines.