Tucked in a remodeled 1924 Craftsman-style firehouse in the peaceful community of Silver Lake, the Edendale offers exquisite cuisine in a comfortable, unassuming setting. Accented with fresh flower arrangements, cozy armchairs, antique sconces and walls of old black and white photos, the setting has the potential to make single diners and large groups alike feel like they are home. As is only fitting in this comforting setting, Executive Chef Paul Downer offers an amazing array of comforting dishes including Ahi Tartare, a Fried Green Tomato Salad, and the signature Edendale Creamy Baked Macaroni and Cheese with chili garlic bread crumbs that guests can add bacon or jalapenos should they desire.

For someone who moved (reluctantly) to southern California from New York City two years ago and found myself living in Pasadena (infinitely closer to family, but not too close) I seem to have developed an unusual sense of campanilismo about the place. Campanilismo is an Italian word that describes how people from a particular town or region are loath to either physically or emotionally wander beyond their own borders and into the traditions, customs and cuisines of other towns, no matter how famous. A person from, say, Bologna – a city no more than fifty miles from Florence – may never have the inclination to go and see that great city, Michelangelo be damned.

Campanilismo is a terrific excuse for any Angeleno who doesn’t want to travel too far from their neighborhood, and it’s the only reason I can fathom for not having gone and explored Silver Lake sooner. Fortunately for me, duty called, and when my editors told me The Edendale Grill in Silver Lake was my next gastronomic destination, I hopped on the freeway and found myself – within fourteen minutes! – happily lost in an exquisite residential neighborhood, a community chock-a-block with beautiful, understated homes, winding roads, and an overwhelming sense of peace, all less than a mile from the chaos that is Hollywood Boulevard. On this rainy, cold and damp evening, the neighborhood seemed particularly warm and inviting. There was a sort of energy in the air that I rarely sense in other, grander communities like Hancock Park or San Marino – a sense of potential, of possibility, of welcome.

Not surprisingly, it was the same feeling I got walking into The Edendale Grill, an unassuming, Christmas light-strewn restaurant on the Rowena Strip. Drive over forty past Hyperion (from the west) and you’ll miss it. So drive slower.

The first thing that struck me as I stepped into the Craftsman-style landmark building (actually a remodeled 1924 firehouse) was that this place is too beautiful to have such an unpretentious name. Funny how little details like that cloud your first impressions; don’t let it happen to you – a more inviting haven you couldn’t find. The Edendale Grill glows from within. Accented with fresh flower arrangements, cozy armchairs, antique sconces and walls of old black and white photos, the place is in that rare class of restaurants that has the potential to make single diners and large groups alike feel like they are home, amongst friends. The world-class mahogany bar is, for my money, the most spectacular bar I’ve ever seen – absolutely transporting. As are the perfect, refreshing cocktails and martinis. As my guest and I perused the menu, we sipped on luscious orange blossom martinis and negronis, both served old-school style – accompanied by miniature carafes. Pure bliss!

But what about the food? you ask.

Within minutes of slipping into our corner banquette, we were offered an amazing assortment of first courses to sample: Kobe steak tartar, peppered-seared Ahi tuna with saba sauce (compliments of Chef de Cuisine Justin Cropper), followed by classic oysters Rockefeller made with Blue Points from the Chesapeake Bay and pillowy crab cakes with a chili-lime aioli. Each one was impeccably crafted, seasoned and prepared to perfection.

Edendale co-owner Patti Peck (who occasionally popped out of the busy kitchen to fill us in on the exceptional history of the building and the labor of love it’s been for her) then insisted we taste the chef’s classic Caesar salad for two, prepared tableside by our friendly, uber-professional waitress. It was the very best Caesar I’ve ever eaten (and eaten) – spicy but not too heavy on garlic or anchovy, not too creamy. Clean, crisp, perfect.

Little did we know that this was just a prelude to the real food. Earlier in the evening, I recall saying something along the lines of, “bring me whatever the chef loves to eat,” to the waitress, and as our salad plates were whisked away and we began contemplating a rainy ride home, Chef Cropper presented us with steaming plates of what proved to be absolute stand-out dishes: the Berkshire Pork Chop (reminiscent of the famous Korubuta pork), and the signature Edendale Meatloaf wrapped in applewood smoked, house-cured bacon and accompanied by ethereal mashed Yukon Golds. As a food writer, I have to say that nothing beats sitting at table with foodie friends indulging in multiple, perfectly executed dishes – unless, of course, it’s sitting at table with a neophyte – a non-foodie friend, her eyes wide with excitement, marveling at the wealth of gastronomic sights, smells and tastes before her. Such was the case when we finally dug into our mains. Both dishes were best in their class and perhaps best of all, and tasted just as we hoped they would – meaty and rich, comfort food to the core, each served with a mountain of fresh vegetables: sautéed collards, parsnip fries, delicate onion rings and more.

The wine list is formidable, and if it happens to be in stock when you visit, DO NOT pass up a glass of the Joel Gott Oakville Cabernet. My palate identified a Cab from the mid-90s, but to my surprise, I was drinking a ’04. I am not a big fan of California Cabs or any of the publications that blindly sing their praises. But this wine took my breath away – unobtrusive, smooth, fruity, an all-together balanced dinner wine.

We gamely asked for more – just coffee, really – and two steaming hottles arrived, brimming with a fresh brew. As we mused on the evening’s happy discovery of a restaurant we hoped wouldn’t become too famous too soon, dessert magically appeared at our table: crème brûlée with assorted berries and a molten chocolate soufflé cake with raspberry sauce and homemade whipped cream. Classics? Yes. Ordinary? Not on your life. Scooping up the last caramel-crusted mound of crème from the brulée bowl, my dinner companion asked if I’d tasted anything as good at my local haunts in Pasadena and I had to admit (somewhat reluctantly) that I had not. It seems that if I truly want to discover the gastronomic delights of southern California, I might just have to revisit the idea of campanilismo, extending my borders out past the 134 and beyond. 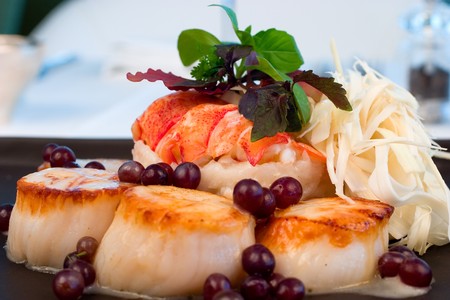