Offering diners modern Japanese fare with American flare, Geisha House in Hollywood caters to those looking for more than the typical sushi restaurant. An ultra modern décor welcomes guests as they enter the restaurant. Providing an atmosphere dripping with sensuality, Geisha House is a great way to start a night out on the town, or to bring a date. The full bar serves up sake infused signature cocktails like the Geisha Kiss Martini. Creative presentation of dishes such as the Sashimi Igloo and Robata World is as much a feast for the eyes as it is for the belly, while Fried Banana and Tempura Brownie make for a sweet conclusion to a meal.

At the beginning of the 21st century, Hollywood Boulevard was in the doldrums. One of the most storied streets in the city had become a ragged strip of souvenir shops, paraded with tourists who hopelessly scoured the neighborhood for signs of glamour. Thankfully, visionary entrepreneurs were convinced they could restore the neighborhood’s luster. Three of these people were Lonnie Moore, Mike Malin, and Shereen Arazm of the Dolce Group, who debuted flashy Geisha House in November 2003, helping to prove that Hollywood Boulevard might not be a lost cause after all.

To reach the side-street entrance, we walked past the exterior’s red walls, smoky glass panels studded with pink neon tubes, and a seductive photo of a woman’s red lips plucking sushi from a pair of chopsticks. After walking down a hallway lined with columns of red four-by-fours, we arrived at the hostess station.

Tag Front Design & Scott Oster designed the two-story space to be visually stimulating, akin to a Tokyo street scene. The lounge area features a backlit bar stacked with curved cube shelving, each pod holding a flat screen television or liquor bottles. Grey banquettes line the wall, fronted by candlelit wood benches. On the lounge wall are a row of photos from Japan and a projection screen showing subtitled Japanese movies.

The Omakase Room, next to the lounge, hosts wood tables and a red sushi bar, manned by five black-clad chefs. Omakase normally requires diners to submit to the whim of the chef, but not at Geisha House, where customers can order off the regular menu.

Two sides of the high-ceilinged dining room host light-grey booths with wood-grain tables and walls lined with geisha-patterned cushions. Another wall features a photo of a bustling Japanese street scene. Centering the space is a red tower, with a fireplace on each side, spiraling to the ceiling. Away from the walls, diners can enjoy red tables. Every table holds a glass cube with an orchid, a candle and a corked pitcher of soy sauce. Completing the look are cherry blossom branches.

Early in the evening, Geisha House hosts an after-work crowd and business dinners. Later in the evening, a younger crowd drops in for a meal before hitting nearby bars and clubs. With low light and plenty of spacious booths, Geisha House is conducive to a romantic evening. Tuesday through Saturday, a DJ commands a deck overlooking the dining room, playing lounge music early and Top 40 late.

We kickstarted our meal with specialty cocktails. Geisha’s Kiss was a sweet, lightly sparkling drink combining sake, Chambord, and champagne, served in a cone-shaped glass with a sweet sinker of pitted lychee. On the menu, Hai sounded sweeter, but packed bite. Vodka was flavored with sweet and sour, lemon juice, lime juice, a frothy float of champagne and strawberry puree, served in another cone-shaped glass.

Our Japanese culinary odyssey began with a well-prepared and generously portioned bowl of edamame, served warm and buttery.

Uni Shooters were presented in two shot glasses submerged in crushed ice that was decorated with a purple orchid. Chunks of creamy sea urchin roe were swimming in sake, soy sauce, and drops of Tabasco for spice, then sprinkled with diced green onion. After squeezing lemon juice into the glasses, we each knocked back a shooter. It was an interesting idea, although the oceanic tang of the uni was lost in their cool bath.

Surf and Turf was the most compelling selection from a non-traditional but intriguing list of sushi rolls. A 14-point compass rose of banana leaf was topped with a circle of eight pieces of cut sushi, each cradling cuts of cooked filet mignon and lobster, wrapped in soy paper and drizzled with sweet caramel-like sesame miso sauce. The plate was decorated with purple orchid petals, four slices of lemon, and central piles of faux wasabi and pickled ginger.

Sommelier William Edward North, a fourth generation wine and spirits professional and a comedian who goes by One Take Willie, suggested we pair the sushi with a glass of Kamouzumi KomeKome (Happy Bride). The sweet sake from Hiroshima had apple hints that played well off the filet and lobster meat.

For one hot course, we opted for a Chef’s Selection, courtesy of Chef Paulo Soares, twin fillets of Black Cod that had been marinated in miso paste and laid on a diamond cut of banana leaf. The nearly caramelized fish came apart in sweet sheets, plated with a decorative orchid and twin towers of orange gobo root that looked like carrots but tasted pickled. The white plate was decoratively dotted with four drops of miso.

For our other hot course, we again trusted Chef Soares by ordering the 10-ounce Grilled Kobe Rib Eye Steak, sliced into two-inch bites and served on a sizzling platter, each tender slice dabbed with a pea-sized dab of wasabi. In the middle of the platter was a dish of teriyaki like “Asian barbecue” dipping sauce, sprinkled with sesame seeds, and smoky three-inch spears of asparagus.

Since North and Dolce Group Wine & Beverage Director Kell Wimmer pride themselves on populating the wine list with boutique wines, we managed to pair the Kobe with a glass of 2005 John Alan Petite Sirah from Paso Robles. North claimed John Alan only produces 70 cases of Petite Sirah a year, and Geisha House gets them all. It was a good get. The red wine was excellent, smoky and a little spicy.

For dessert, our waiter presented a rectangular black box, removing the lid to unveil Molten Chocolate Cake. The dark chocolate cake with the oozing center was dusted with confectioner’s sugar, served with a scoop of vanilla ice cream and two enormous blackberries. It was a respectable cake, but could have used a twist to separate it from dozens of other versions in town.

The more Asian-inspired dessert involved a quintet of Crispy Wontons filled with tropical fruits and cream cheese, plated on another diamond cut banana leaf. The fried pockets contained oozing cream cheese and a different fruit per wonton, including pineapple and blueberry. They were served with dishes of clear sugar syrups flavored with ground vanilla bean and mango-passion fruit, designed for dipping but ultimately unnecessary.

Dessert wine is an uncommon treat, especially after such a hearty meal, but since North promised to deliver the “world’s best,” we couldn’t resist. Marchesi di Grey Moscato d’Asti, from La Serra, Italy, was lightly sparkling and sweet, but not overpowering. Was it the world’s best? Doubtful, but it was a nice finisher.

While a couple of dishes could have used more pop, Geisha House managed to deliver a fairly well balanced sensory experience that hints at the viability of Hollywood Boulevard Version 2.0. 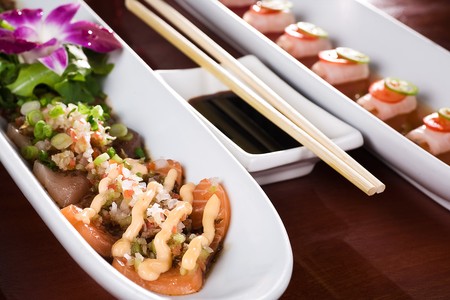 Where are your other locations?

Are reservations required at Geisha House?

No, but reservations are recommended.

What is the average meal price at Geisha House?

Got any live shows?

Can I bring in my own birthday cake to the restaurant?

Yes, you are allowed to bring in your own cake but please note that there is a $25 cake-cutting fee.

Is Geisha House part of the Dolce Group?

Light and No Rice Rolls

I was quite excited to dine at the well-known Geisha House in Hollywood last weekend from all the hype I've heard about it. Everything I had heard prior to visit was definitely on par with what I experienced. From the furniture to the lighting to the live DJ music, Geisha House is tastefully designed from inside out. As for the food, it simply speaks for itself. Geisha House does a remarkable job at mixing authentic Japanese cuisine with a touch of American fusion. The professional staff makes the restaurant a very inviting and warm atmosphere. My server was friendly from start to finish. The live upbeat music combined with the trendy décor and grade A service and food makes Geisha House one of L.A.'s hotspots for all the right reasons.

I had a client in town a few weeks back and wanted to take her to a place that was very LA and that had good sushi. Decided on Geisha House, which ended up being a good choice. Sushi and service exceeded my expectations and I could tell my client was impressed as well.

I came here for the first time this Valentines Day! It was great! great atmosphere, great food, great service. The Geisha girls are a plus! I definitely recommend this to anyone who loves sushi or Asian Fusion!

LOVED IT!!! Can't express it enough you have got to go for yourself. Super nice waitress and very delicious food and you don't have to worry about being to pricy some plates are just ten bucks, and the restaruant is beautiful.

My wife and I enjoyed the exquisite food, the friendly service, and DJ music (which adds a nice touch to the already comfortable environment). We're coming back soon.

A bit over priced for what we received for food and drink. The service was great and our server was well educated about the menu.

I had an awesome time. Took my boyfriend for his Birthday and he was very impressed. The cocktails were divine and the food was excellent. The service could be better , but the atmosphere makes up for what the staff lacks.

Near to bad exerience

Geisha Restaurant advertized itself having Geisha performers, but they only perform from Tuesday to Sunday, a bommer if you go on Tuesday! The food is excellent, with great presentation and effort to be top 1 of the Asian scene. The waiter service is poor and non-existent, be patient if you go...they are slow servers with little memory due that they do not have a technique to take good notes on orders.