La Parolaccia means "bad language" in Italian, and for those that are speakers of Italian may notice the staff is swearing up a storm. Done in good spirits and only between staff members, it only adds to the charm of this cozy and inviting Long Beach spot. The menu offers all the traditional favorites expected from two chefs hailing from Milan and Rome. While the Limon cello ice cream alone will guarantee La Paroloaccia Osteria a place in diner’s hearts, it is the service is that is truly outstanding, swearing be damned!

Falling in love with La Parolaccia

I have a penchant for falling in love with restaurants with names that sound beautiful rolling off the tongue of their French or Italian waiters, but when translated are sort of, well, dirty. When I lived in Hollywood my favorite spot was called La Poubelle, also known as “the trash can,” and let me tell you after a glass of champagne you could swear you are on the set of Amelie and that Audrey Tautou herself was on route to meet you for some crepes. Since my arrival in Long Beach a year ago I have missed my favorite local haunt and been actively seeking a proper replacement. I am happy to report that I need search no further. La Parolaccia literally means, “the bad language,” and damn it all to hell, they do what they do, mighty well.

We arrive at la Parolaccia Osteria dressed to the nines. It is my good friend Sonya’s birthday dinner celebration and we are prepared to make a proper night of it. Sonya and I met in Florence almost five years ago when we were paired as roommates during a study abroad session. It is fitting therefore that we end up at this cozy and inviting Italian restaurant, and the second we walk through the door a wave of nostalgia comes over us. We have no reservation, and at 8:30pm the small restaurant is almost filled to capacity. The host yells across the room to his coworkers in Italian and fortunately Sonya and I have been dubbed “ragazze belle,” as this fact secures us the last available table, which incidentally is also in the corner and alongside the window.

The ambiance is romantic and authentic Italian. One truly does feel as though they might have bypassed Long Beach entirely and been teleported into a charming side street café in Rome. While it is lively and spirited inside, it is still quiet enough to enjoy conversation with your dining partner. I was disappointed that the napkins were paper instead of cloth as they did not convey the level of quality that I noted once my food was served. Additionally Sonya and I did both feel as though the lighting could have been slightly dimmer in order to enhance the romantic atmosphere.

Within moments of Roberto’s explanation of the specials we realized that we were in fabulous hands. Hailing from Sicily, Roberto, and the rest of the staff at La Parolaccia for that matter, are all the real deal. Here you will find professional, knowledgeable, and mostly Italian waiters with a genuine love for the food they are serving and the restaurant they are employed with. As a former waitress myself I can spot unhappy employees a mile a way, and let me tell you, there might as well be rainbows flying out of the ears of every employee at La Parolaccia.

We discuss ordering a litre of the house red, but Roberto kindly informed us that this would not be the best choice and suggested a few wines off the list. Neither Sonya nor I fancy ourselves connoisseurs, but we knew we wanted a Chianti to commemorate the many evenings of late night study that transpired while literally obliterated on the stuff. So, at Roberto’s recommendation, we selected the Tuscan ’03 Chianti Riserva, Palladio, and we really enjoyed the cherry tones with hints of vanilla and cinnamon.

As we toasted to love and friendship we dipped our warm fresh table bread into some of the most delicious sun dried tomato pesto I have ever tasted. No olive oil and balsamic vinegar dip to tide you over until your meal arrives at La Parolaccia! As Sonya is vegetarian, and it was after all her night, I did not order the calamari although it is always a favorite of mine. Instead we picked the Carciofi Grigliati con Grana which quite literally blew my mind. Never has such a simple dish been prepared so well. The grilled and marinated artichokes with shaved grana padano cheese were so delicately and perfectly flavored that any regrets I had that the Prosciuto e Melone was off limits to me for the night dissipated. Unfortunately our second antipasti, the Involtini di Melanzane was not quite as wonderful, and we found it quite mediocre in comparison. The roasted and marinated eggplant rolled and filled with fresh ricotta cheese sounded so full of flavor in print, but in reality was quite bland and boring.

This did not prove to be too big a problem as our salad course arrived and did the traditional Insalata Caprese justice. I consider myself to be an aficionado when it comes to the fresh mozzarella salad and while La Parolaccia does not reinvent the wheel on this one, they certainly do not need to. The layering of fresh tomato, fresh mozarrella, extra virgin olive oil, oregano and basil was wonderful and allowed for the ideal rationing of tomato to cheese. Additionally I found that the salad needed no balsamic vinegar, only a small dash of salt, and that to me is the marking of a job well done on this particular dish. Sonya and I polished this off quickly and felt like we had made a wise decision in deciding to split our entrée.

As Roberto cleared our plates we returned to salivating over the pesto and looked around at the eclectic Long Beach crowd. We were surrounded by couples on dates, large families enjoying a late Friday night dinner and even some of the staff who had apparently ended their shifts already, or perhaps were just hungry! Knowing that we were in no rush and intent on enjoying our wine and engaging in a lengthy trip down memory lane, Roberto timed our meal perfectly and did not rush us. Rather he gave us ample time between courses which reminded us in turn of the service we received when in his homeland. He conversed with us at length and gave us the history of the restaurant.

Owners Nicola Bellazzi and Stefano Procaccino are from Milan and Rome respectively. And their heritage is evident in the menu but certainly there is influence from both northern and southern Italy. After spending time as chefs at a laundry list of Orange County’s finest restaurants the two decided to open their own establishment in 2005. They named it after a restaurant by the same name in Rome, where the servers enjoy using bad language with their customers and encouraging them to fire back in like fashion. The Roman edition has been a mainstay for locals for over 50 years, but is not frequented by tourists. The Long Beach version doesn’t take its name as seriously, in that they are not known for insulting their customers openly, however if you speak the language at all you may smile when you hear the servers addressing one another ‘affectionately’.

And affectionately is definitely an understatement when describing La Parolaccia’s gnocchi. Once again at the recommendation of Roberto, who had not done us wrong yet, we ordered off the menu. Roberto’s special Gnocchi (which you too can order ‘off’ the menu any night of the week regardless of who your server is) is topped with sun dried tomatoes, fresh basil, pine nuts and marscapone cheese. There are two other versions available on the menu which we did not sample, and I can only assume that they are just as fabulous. The gnocchi has wonderfully firm consistency that dissolves within seconds of entering your mouth into a soft, creamy texture. The cliché ‘melts in your mouth’ has never been more apt. This becomes clear when I fight Sonya for the last bite, despite the fact that it is her birthday, and my dress has become so tight that I consider embracing my inner Cher and ripping it open down to the waistline.

Happily I have been taking Pilates classes for months now and I have learned how to properly hold in my stomach muscles. So I do so in preparation for dessert, which of course is mandatory at birthday dinners. We have not told Roberto that it is Sonya’s birthday as neither of us is a fan of the big song and dance; however we discover that his fellow servers have taken it upon themselves to organize a dessert for us just ‘because’. They couldn’t have chosen better. The Lemon Cello ice cream is arguably what I would have selected had I had the option and is so reminiscent of my time in Italy that I almost want to rush home and book tickets on priceline.com immediately. Sonya and I linger over the last few bites as I sober up on a cappuccino. Roberto, and his counterparts, bid us a fond farewell, and on our walk to the car we wax lyrical about our time in their homeland and how overjoyed we are that they have chosen to bring a little piece of Italy to Long Beach. 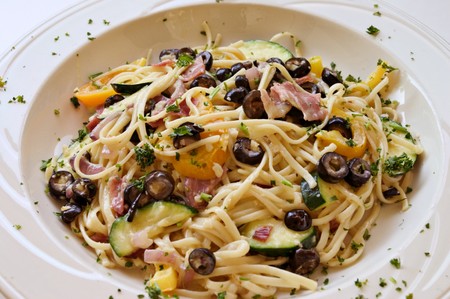