A South Bay fixture since 1991, laid-back Lido di Manhattan occupies a commanding corner site. The restaurant is bright and open, with artwork by local artist Monica Farrell. The cuisine is California-Italian, with a heavier lean towards the latter. Signature dishes such as lobster won ton tacos, angel hair pasta with jumbo scallops and tiger prawns and charbroiled filet mignon showcase fresh ingredients. The sweet selection of Desserts are all made in house. Wine buffs will find plenty to please, while cocktail lovers can work their way through the lengthy list. A calendar of cooking classes and events keeps things interesting for both regulars and newcomers.

Lido of the pack

A South Bay fixture since 1991, Lido di Manhattan (‘Manhattan Beach’ in Italian) occupies a commanding corner site of a strip plaza off Rosecrans Avenue. Owner Lisa Hemmat took over in 2004, and since then has successfully attracted a steady stream of new fans to the restaurant, while keeping its legion of loyal regulars coming back for more—no mean feat when there’s so much competition right on the doorstep.

As you enter, a small bar area is to the right, and the main restaurant to the left. While the bar is dark and intimate, the restaurant is bright and airy, enlivened by mirrors and artwork by local artist Monica Farrell (who is currently working on some new, specially commissioned pieces). Red drapes frame floor-to-ceiling windows along one side, which provide a view of the parking lot. The front of the restaurant has wooden tables, while beige-colored banquettes with marble-topped tables are towards the back.

The cuisine is California-Italian, with the emphasis on the latter: risottos, pizzas, and pastas all feature on the exhaustive dinner menu, along with fish, chicken, and steaks. The lunch menu offers lighter fare such as sandwiches, soups, bruschetta, and salads, while a separate kids’ menu keeps smaller appetites satisfied.

Such a lengthy repertoire can sometimes work against a restaurant, of course, with diners feeling overwhelmed by selections. It’s reassuring to know, then, that Lisa and Chef Luis Martinez are planning on paring things down; they’ll keep the popular, signature items and daily specials, while introducing more seasonal dishes.

As we sat perusing the menu, we munched on homemade bread, served in a basket. It was light and fluffy, similar to a French baguette, and, like most things at Lido, it’s made in house. There was a bottle of olive oil on each table for dipping; on request, the staff will make a dip with extra virgin olive oil, fresh basil, Parmesan cheese, and crushed red peppers.

Undecided, we asked to try a few of the chef’s specialties. Lobster Wonton Tacos – showing an Asian influence as well as touches of Italian and Mexican – were so fresh they virtually leapt off the plate. The two crisp, nongreasy tacos were comprised of taco shells made of wonton wrappers, filled with chunks of lobster that was lightly cooked and topped with shredded Napa cabbage, bean sprouts, and a cilantro vinaigrette. Served with a twist of lemon, they were a perfect choice for a warm summer’s evening.

Spicy Ahi Tower, another signature dish, is frequently requested by regulars – and it’s easy to see why. Deconstructed, the ingredients might sound less than thrilling; together, they worked wonderfully: a mini circle of diced, soy- and chili-marinated raw tuna topped with avocado and roasted red bell peppers. It was the freshness of the each ingredient that ensured this dish’s success.

Now, it’s hard to get excited about a chopped salad, but we can honestly say the Chopped Salad at Lido was the best we’ve ever eaten. The combination of ingredients – lettuce, celery, salami, garbanzo beans, and red onions, tossed with a light vinaigrette – was unusual but worked perfectly. A scattering of freshly fried croutons made of Brie was a welcome change from the mundane bread variety.

Our main courses were two more Lido fortes. Jumbo Scallops & Tiger Prawns showcased two huge scallops and three large prawns in a lobster reduction sauce over angel hair pasta. Despite the richness of the ingredients, the dish wasn’t stodgy – the sauce was light, with just a dash of cream. The homemade pasta was soft but not cooked beyond al dente.

The next dish – Charbroiled Filet Mignon – raised the bar even higher. The meat, a 10oz hunk wrapped in beautifully chargrilled pancetta, was so tender we didn’t need a steak knife. Underneath sat a succulent, intensely flavored portobello mushroom. A lovely balsamic reduction, tart yet sweet, was drizzled over the plate. Accompanying the dish was a tomato ‘salad’ of tiny tomatoes, goat’s cheese, and tarragon, along with crisp juliennes of chayote, a Mexican ingredient that we hadn’t tried before. A member of the gourd family (like cucumbers and squash), it’s actually a fruit, but rather like celeriac in texture and taste.

Portions at Lido are generous, so we didn’t need dessert… but in our book that’s no excuse not to indulge, especially when the list is this enticing. Tiramisu, served as a slice on a plate rather than in a bowl, and topped with chocolate sauce, was dense and cakelike. Flavors were subtle: the taste of coffee wasn’t overpowering, and we couldn’t detect much liquor.

Conversely, a slice of Chocolate Walnut Tart, served warm with a scoop of vanilla ice-cream, was so light and flaky it almost fell apart. Moist, with loosely held together chunks of walnuts, its freshness shone through. Unlike many shop-bought desserts, it wasn’t too sweet, either.

As with the food, the choice of drinks is extensive. Lido di Manhattan has a 130-strong, recently revamped wine list that spans the globe, from Australia to Chile via France and Italy. US wines feature heavily, in particular California, with plenty of bottles from Napa and Sonoma, as well as a few options from Oregon and Washington. It's refreshing to see a decent choice of wines by the glass and half-bottles, too. The cocktail list is strong on martinis, but also covers intriguing one-offs such as Lisa’s Bumbleberry Pie, made with fresh blackberry puree and raspberry and blueberry vodka, and served in a gram cracker-rimmed glass. We resisted the temptation and instead plumped for a glass of smooth Markham Cabernet Sauvignon.

Even on a quiet night (thanks to a Lakers game), it was obvious that Lido appeals to many kinds of diners – a group of thirty-something women, two men conducting a business meeting, an older couple, and one man clearly happy to eat on his own. Service was friendly and chatty, the waitress recommending other house favorites such as osso buco and lamb for future reference, and the music eclectic: the soundtrack included Louis Armstrong, the “I Love Lucy” theme, and off-the-wall jazz.

Lido is also known for its events, as diverse as baby showers and cooking classes, some of which are held on the enclosed patio, where more artwork is displayed. One thing’s for sure: whether we need to brush up on our culinary techniques or simply crave some excellent food, we’ll be back. 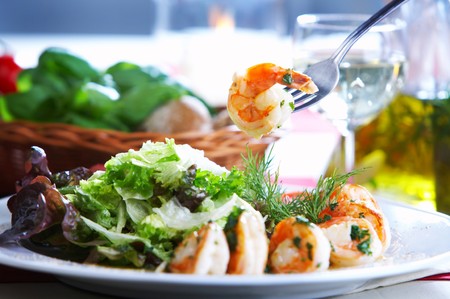