Building on the success of casual Literati Café, Tony Kouba and wife Paty opened Literati II next door in March 2005. Chef Chris Kidder, a long-time believer in seasonal cooking, delivers the couple's vision for a market-inspired neighborhood restaurant. The literary-themed interior celebrates writers, with portraits of authors and hardcover books ingrained in the structure. Chef Kidder prints a new menu daily, based upon what he scores at the market, but always includes crisp-skinned rotisserie chicken, his signature pork chop, and burger. Chris’ wife, pastry chef Kim Sklar, contributes desserts like churros with bittersweet chocolate dipping sauce.

Conveniently located at the confluence of Brentwood and Santa Monica, and near the intersection of the 10 and 405 freeways, Literati II attracts a mix of locals and citywide food junkies. Owners Tony and Paty Kouba opened the restaurant in March 2005, building on the success of their casual Literati Café, located next door. Chef Chris Kidder, a long-time believer in seasonal cooking, delivers the Kouba’s vision for a neighborhood restaurant with market-inspired American dishes.

Literati II is a mid-priced option, so only the local student population isn’t well represented in the dining room. Lunch is a casual meal, with a compact menu and the added bonus of a sun-soaked patio. Dinner is more atmospheric, featuring the soft glow of candlelight, but the restaurant is by no means formal at any point during the day.

The literary-themed dining room features actual book covers ingrained in the wall – David Halberstam’s “The Best and The Brightest,” Charles Dickens’s “Nicholas Nickleby,” and William Shatner’s memoir: “Star Trek Memories.” There are also dozens of black-and-white photos of authors, including Joyce Carol Oates, Ezra Pound, and Norman Mailer. The literary theme even extends to the business cards, which double as bookmarks. There are also color photos of Westwood from years past and playful touches like “One-Way” stenciled on the floor and a giant Dixon Ticonderoga pencil affixed to the wall. Each table sports a white tablecloth and a potted succulent. Blonde wood shutters open onto a plant-lined patio with a modern fountain.

To start, we were treated to a basket of La Brea Bakery bread: slabs of sourdough, crispy toast sprinkled with Parmesan, and seed-crusted flatbread. The basket was served with a dish of zesty Romesco sauce, which I spooned on the sourdough and toast, to good effect.

Chef Kidder, who prior to Literati II worked at Campanile and San Francisco’s Zuni Café, procures about 90 percent of his ingredients from local farmers’ markets and directly from farmers he knows. In keeping with his seasonal approach, Literati II prints their menu every day. He’s developed a core 15 items that aren’t market-dependent, for consistency, but likes to experiment based upon what the farmers are growing.

For my appetizer, I ordered Bruschetta with Baby Octopus: two crisp-crusted slabs of olive-oil-rubbed peasant bread topped with cephalopods, as well as sautéed spinach leaves, plump yellow beans, and a dice of vivid red heirloom tomatoes. Octopus has a reputation for being chewy, but Chef Kidder managed to coax maximum tenderness from the purple-hued tentacles and abdomens. Overall, it was a well-constructed Mediterranean-influenced invention. I can picture eating a similar dish on Santorini, overlooking the Sea of Crete.

The plate of Grilled Pacific Sea Scallops centered on four delicate herb-brushed scallops, which were set atop a smattering of sweet onions, artichokes, sweet peas and bright red and burgundy heirloom tomatoes. The element that elevated this dish to stellar status was the crisp strips of lean, salty pancetta.

There were plenty of enticing entrée options, but I opted for one of the night's specials: Grilled Leg of Colorado Lamb—four thin-cut slices with crispy edges. The rosy meat was dabbed with black olive tapenade and accompanied by a black-olive bread salad, tossed with chunks of tender char-grilled eggplant, tomato, and black runner beans, whose flavor and texture were reminiscent of edamame. The mélange was doused in balsamic vinegar, which imparted a nice tang.

My dining companion selected the Pork Chop, double-cut and cooked medium rare, as the chef suggested. The lean hog was plated with a golden-crusted square of potato and walnut gratin, a small pile of grilled leeks, and three halves of roasted apricot, cooked until sweet and spreadable.

My second tablemate selected one of Literati II's core dishes, the Rotisserie Chicken: half of a free-range Shelton Farms bird that retained its natural juices while still offering a bronzed, crackling skin. The prescribed poultry pairings were Literati Slaw and French fries, although my tablemate opted to substitute another side for $2. In place of the fries he selected Marinated Beets with Feta. There were three hues of vivid beets: purple, yellow, and rarely-seen white. The Literati Slaw was inventive, light on mayo in favor of champagne vinegar and dime-sized grape shavings, which added a nice sweetness to the crisp mélange of cabbage, julienned carrots, and daikon.

To drink, there was an interesting selection of California Sauvignon Blancs and Merlots, plus some intriguing Spanish varietals, but we all opted for "specialty cocktails." I ordered the canary yellow Gingertini - Grey Goose Vodka infused with fresh ginger, chilled with lemon and apple juice and served in a martini glass with a sweet sinker of sugared ginger candy. My guests opted for the Watermelon Margarita and a non-alcoholic Blueberry Lemonade. The former was a refreshing, deep-pink mixture of fresh-muddled watermelon, tequila, triple sec, Cointreau, simple syrup, and fresh lime served on the rocks, with a lime wedge. The latter was a purple-hued brew, tart mix of Absolut Citron and fresh lemonade served on the rocks, with a glut of sweet muddled blueberries at the bottom of the glass.

Kim Sklar, Chef Kidder's wife, serves as the consulting pastry chef, and all but one of the desserts were made from her recipes. The inclusion of summer stone fruit and berries in four of the six dessert options demonstrated that she shares her husband's commitment to seasonal ingredients.

Chef Sklar developed her recipe for Churros while working at Lucques, and they've become Literati II's biggest seller. The four crisp-on-the-outside, fluffy-on-the-inside pastries were blanketed with granulated sugar, then partnered with a glass dish of hot bittersweet chocolate. The chocolate dipping sauce helped to cut the sweetness of the sugar-coated pastries. The white plate was garnished with four varieties of summer berries: raspberries, strawberries, blueberries and a single juicy blackberry that was over three inches around.

Paty's Carrot Cake, made using co-owner Paty Kouba's recipe, was a four-inch-tall cake that utilized Chantenay carrots and a cream cheese frosting studded with candied walnuts. Five moist layers of cake sandwiched four more layers of cream cheese. Chantenay carrots are a small, sweet variety originally from France. Not only did they fleck the cake, but dime-sized slivers lined the pastry's perimeter, paired with diced pineapple. Further garnishing the white plate were even more candied walnuts, providing an additional crunch.

After eating dinner at Literati II, it’s clear that the Koubas and Chris Kidder accomplished what they set out to do over two years ago. Each dish tasted market-fresh and was hearty without being heavy, the atmosphere was warm and inviting and most importantly, diners were smiling. 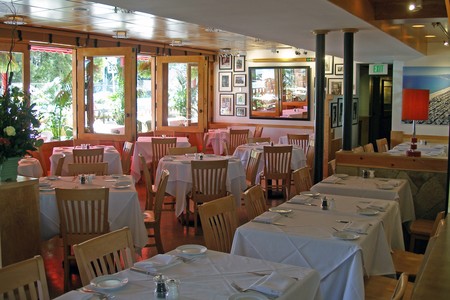