Lucky Strike fuses Hollywood chic with celebrity bowling and fun comfort food. This hip bowling alley is the epicenter of nouveau cool. Master Chef Bill Starbuck presents an array of upscale American classics that perfectly complement the venue’s unique Los Angeles experience. Lucky Strike Lanes and Lounge offers a creative experience that echoes Los Angeles’ hip, high energy, and fast paced vibe. Whether knocking down pins or knocking back great food and drink, this Hollywood hotspot is sure to provide an entertaining time for all in attendance.

Fuse Hollywood chic with celebrity bowling and fun comfort food, and you’ve got Lucky Strike. This hip bowling spot is the epicenter of nouveau cool, and certainly not your father’s bowling alley. With inviting leather booths, warm contemporary décor, and subtle lighting, the dining lounge has a dramatic designer-den feel that’s hip enough that you could bring that special someone who you’ve been waiting to impress. And when you’re ready to get your game on, the lanes are techno-cool with each one sporting its own floor-to- ceiling video screen. There are billiard tables, and don’t miss the Captain Fantastic pinball machine circa pre-Ms. Pac-Man.  As for the food, Master Chef Bill Starbuck’s and on-site Chef Hugo Montoya’s presentations of upscale American classics perfectly complement this unique L.A. experience.

Our evening began with an order of Baked Potato Chips. Imagine nachos made with warm homemade potato chips topped with cheddar cheese, crispy bacon, sour cream, and chives. They will spoil you for ordering nachos anywhere else. There are also Blue Cheese Chips, featuring the same great chips but served topped with a warm blue cheese crumble. I’m glad Idaho is in this country.

But my favorite Lucky Strike potato selection is the Crunchy Mashed Potato Rolls. These rolls are crispy on the outside, and also come topped with cheddar cheese, bacon, and chives. But then, on the inside, you find the perfect homemade mashed potatoes just like Mom used to make on those cold winter days back east. Bite into one of these rolls, and your world will actually stop for a brief second while your taste buds and cerebral pleasure centers confer upon the subtle beauty of this culinary creation.

But your evening is just beginning. There’s still the Surf and Turf Skewers. Combine lime shrimp that has been dusted with citrus herb spice then seared until golden brown with marinated steak teriyaki, green peppers and tiny button mushrooms, and you’ve got yourself some skewers. The Lime Shrimp skewers also come with a sweet chili sauce for dipping.

Lucky Strike also has a full bar. My selection was a 2002 Estancia Merlot: creamy texture with black and raspberry notes escorted by a slight peppery kick. My friend had a 2004 Clos Du Bois Chardonnay: apple undertones with a hint of vanilla that lingered on a long finish.

And then came the time for the sandwich course. First, we tried the Flank Steak Sandwich: grilled flank steak with roasted garlic mayo, roasted tomatoes, arugula and creamy melted blue cheese. Man, oh man, did I love this.  But, just when I decided what my favorite menu selection was, along came the Club Sandwich with turkey, applewood smoked bacon, avocado and a fried egg. A what? Yup, a fried egg. Who would have thought? Which leads me to think, what kind of club sandwiches have I been eating? Somehow, this fried egg addition is the perfect ingredient that starts your taste buds thinking in a whole new direction. That egg-over-easy really adds a certain je ne sais quoi to this sandwich. You really don’t know why it works, it just does. Maybe I’ll put a fried egg on something when I get home…

Now, if you have room after the Blue Cheese Chips, the Crunchy Potato Skin Rolls, the Surf and Turf Skewers, the BBQ Pizza, the Flank Steak and Club Sandwich, then the stage has been perfectly set for Chef Starbuck’s greatest Lucky Strike creation: Chocolate Insanity.  Imagine if you will: homemade chocolate brownies made from scratch, with generous hunks of Callebaut bittersweet dark chocolate blended in a secret chocolate sauce and then served warm, soufflé style, topped with rich vanilla bean ice cream, and you’ve got your newest addiction. Chocoholics, prepare for rehab.

And did I mention the bowling? Yes, all of this amazing food can be yours lane-side.   Lucky Strike serves its full menu from 11:00 AM to 1:00 AM seven days a week, which in this town is saying something. Lucky Strike is also available for special events. An exclusive private lounge with its own four lanes is available for, say, your Hollywood premiere or to celebrate that big promotion that you’ve got coming.

And then there’s the celebrity factor. The Lakers, Marcus Allen, and even the Playboy Playmates have graced the lanes at Lucky Strike. Executive Chef Bill Starbuck, who is also the Executive Chef of Along Came Mary Catering, has planned the menus for numerous special L.A. events including the Grammy’s and Emmys, Brad and Jennifer’s wedding, and of course Ms. Streisand’s and Mr. Brolin’s reception and festivities. Chef Starbuck has also created the menu for several Hollywood premiere parties: Men in Black I and II, Harry Potter and The Chamber of Secrets, The Hours, and Spiderman 2. In fact, The Food Network has aired a special episode on Chef Starbuck catering the Grammy’s; it aired on October 26th, 2006.

Five-star food, excellent service, and cool to spare, tonight might just be your lucky night. And remember, nothing complements a perfect game better than Chocolate Insanity.

This is Matt The Food Dude™ and I’ll see you in rehab. 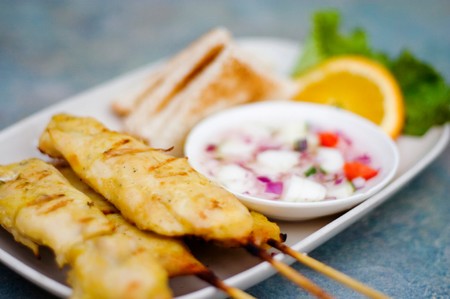