On Melrose, along a popular strip of hip West Hollywood restaurants, Lucques retains its standing as an ideal spot for lunch, dinner, and drinks. In its eighth year, the restaurant excels with its short-list of savory French-Mediterranean cuisine combining subtle, yet distinct, flavors with fish, poultry, and meat. Executive Chef Suzanne Goin uses seasonal ingredients to create dishes that are inventive, fresh, and flavorful. While not extensive, the selections are sufficiently unique to appease finicky Angelenos and most likely tantalize them to return. The wine list is extensive and hand selected by co-owner Caroline Styne.

In a neighborhood of hip, happening hot spots on famed Melrose Avenue in West Hollywood, Lucques reigns as restaurant royalty under the guidance of dynamic duo Suzanne Goin and Caroline Styne.  Opened in 1998, Lucques boasts a pedigreed partnership in Executive Chef Goin, who previously was chef de cuisine at Campanile Los Angeles, and Co-Owner Styne, former manager of the popular nightery Jones Hollywood.  Goin’s interpretation of French-Mediterranean cuisine of classic simplicity recently won her the 2006 James Beard Foundation’s Award of Excellence as “Best Chef in California.”  In its ninth year, Lucques does not falter in dedication to its mission of classically elegant cuisine, and this resolve is reflected throughout all aspects of the restaurant.

Our experience at Lucques’ began at its front door with the restaurant presenting an unassuming façade of cascading vines, aged brick, and glass windows.  Lucques serves up a dash of Hollywood history, as the restaurant resides in the former carriage house of ‘20s silent screen legend Harold Lloyd. Stepping into the restaurant, we felt that Lucques emanated charm in its combined cozy warmth of mellow brick and dark wood flooring.  The décor exuded Provencal through color and design, brick and wood.  In the main dining room, airy elegance—through the artful display of framed mirrors—expanded the area.  Olive-colored banquettes nestled along the walls while smaller tables for two and four completed the space.  Tables were simply attired in starchy white linens, gleaming glassware and burnished silver.

A few paces beyond the entrance sat an inviting fireplace fronted by an arrangement of sleek cushioned benches of luxuriant leather.  Designed to accommodate diners waiting for tables, the space was not large, but it conveyed a message that Lucques’ patrons are welcomed guests.

Indeed, we felt like guests at a French country manor as the hostess warmly greeted then escorted us to our table.  After deciding to sit in the back patio, we skirted the main dining area and well-stocked bar to the back of the restaurant.  Along the way, on our left between the main room and patio, we passed a portioned-off, semi-private space that appeared appropriate for a small gathering of 15.

We approached the patio through French double doors to an intimate, though fairly spacious, garden setting charmingly framed by potted trees and climbing vines.  A fully enclosed space, which could be closed off for a private group of 50-75, the patio featured walls colored a warm earthen hue and a ceiling topped by a high canopy adorned with wisps of extended greenery.  The feeling of outdoor airiness was not diminished by the patio’s inhabitants of wrought iron tables, which varied in size from tables for two to eight.  Dotted around were heat lamps which emitted warmth as if the Provencal sun were sharing its last traces of brilliance.  It was a delightfully charming, visually appealing space.  Along with the sound of thrumming Spanish guitars, we were entranced, and the evening had barely begun!

Our server Lucia introduced herself then circulated the drink and dinner menus.  Lucques’ full wine list covers numerous pages with its “wines by the glass” spanning only one page.  Yet, even this selection reflected a balanced offering of sparkling, white and red wines from Napa, Central Coast, Italy and Spain.  All wines are expertly hand-picked by Lucques partner Caroline Styne.  Upon seeing Prosecco on the list, I immediately knew that I’d forego my usual champagne for this bubbly Italian specialty.  Lucques’ selection was a Bellenda, Miraval ’05, Prosecco di Conegliano, which was refreshingly delicate with a hint of sweetness.  My dining partner chose the Chateau Sainte Marie ’03, a dry, yet full-mouthed wine from Entre Deux Mers.  Drinks were presented quickly, and we sipped while reviewing the menu.  Fairly promptly, Lucques’ specialty and namesake olives were served accompanied by crunchy Marcona almonds, French fleur de sel, and European-style butter partnered with divinely fresh Brea Bakery bread.

Now came our first big decision of the evening.  What to select for our starter?  Lucia suggested I try the soft egg dish: Asparagus with Slow-Cooked Egg, whole grain mustard, Parmesan, and Salame Gentile.  Not surprisingly, a “yes!” came easily to my lips.  My guest ordered another starter that sounded equally appealing: Cipollini Onion and Bleu de Severac Tart with walnuts, dried figs, and arugula.

Starters arrived and it was love at first bite as I tasted the combination of soft egg, asparagus and mustard.  The bite was warm, creamy, and slightly tangy from mustard.  It was an inspired combination of flavors that didn’t overpower but perfectly complemented each other.  I didn’t want to share, but since I would be asking my partner for a bit of his starter, it was a necessary sacrifice.  The tart was creamy with a blue cheese bite that slightly one-upped the onion, yet all ingredients combined to result in a balance of flavors and a flawless dish.  Two stewed figs, placed alongside the tart, remained firm and meaty upon each taste.

Choosing a main course proved a greater challenge.  While my guest quickly selected the short ribs for his meal, I lingered over the menu looking for a dish that ideally captured the essence of Lucques.  Lucia highly recommended “The Devil’s Chicken” explaining that it was one of Goin’s original signature dishes.  Plus, Lucia elaborated, the dish had recently reappeared on the menu after a lengthy absence.  Best to take advantage of this opportunity, I reasoned.  Normally, I don’t order chicken since it makes a frequent appearance at home, but I took the bait and ordered the recommended dish.  Whether it was the dish’s name or its inclusion of leeks (which I love), I was enticed.

Another round of wine was brought to us.  This time I chose Riesling, a Zind Humbrecht ’05, which came highly recommended.  Light, dry, only slightly sweet, it would be a lovely foil to the chicken.  My dinner partner, enamored of his Ste. Marie, ordered a second glass.

Our entreés arrived and we briefly basked in the warmth and fragrance in front of us.  The Devil’s Chicken was aptly named for its inspired combination of mustard- breadcrumb crust and spicy marinade.  It remained, however, a subtle dish of spicy heat that didn’t overpower.  Served in a brown ramekin-like dish, the chicken, prepared with leeks, butter, and vermouth, was crusted and served on slices of firm yellow potato.  Remnants of chili flakes from the marinade floated about in the sauce adding a slight bite of flavor.  The dish was infused with classic French tarragon and thyme sprigs.  It was finished off with a sprinkling of parsley for additional color and taste.  The meat was tender and tore apart with my fork.  A bit of crunch from the crust, mellow creaminess from the sauce, and moist chicken comprised my first bite.  Excellent!  It reminded me of chicken and stuffing heightened to an “haute” level of cuisine.

The short ribs were equally satisfying.  Another one of Lucques’ original dishes, the Niman Ranch Beef Short Ribs were prepared with sautéed greens, pearl onions, and a dollop of horseradish cream.  The beef needed no knife and the velvety, mild horseradish cream added a slight sharpness which partnered well with the earthy, rich meat.  I was beginning to learn that Lucques’s specialty is deft preparation of masterfully blended ingredients that, while retaining individual integrity, combine flavorfully.  As any cook knows, only talent can generate this balance.

The talent that night was Chef Rodolfo Aguado, who learned his culinary magic from the maestro herself, Suzanne Goin.  In a town and industry of turnstiling talent, it was impressive to learn that Aguado started out as a dishwasher with Goin and grew through the ranks under her tutelage.  Complements to Goin and Styne for creating an establishment where most of the staff has been with Lucques since its inception or shortly following.

As we finished our last sips of wine, we agreed that we couldn’t leave Lucques without sampling dessert.  Pastry chef Breanne Varela’s assortment was sweet enough to satisfy yet light enough to entice even the most sated diner.  We opted for the honey panna cotta with citrus, dates, ras al hanout (a Moroccan spice blend) and sesame.   The custard-y panna cotta, with its undertone of sweet, mild honey and subtle spice, was plated in a bath of refreshingly light citrus “soup” topped with a garnish of tropical fruit.  This was an excellent choice and a smooth and silky finish to a delightful evening.

Next time, we promised ourselves, we will splurge on Lucques’ 30-year old Dow’s Tawny Port from its broad dessert selection of ports, Madeira and digestifs.  For by now, it only took a glance at each other to agree that Lucques was a hit and a place to gladly return. 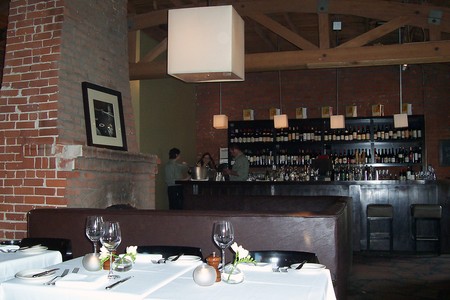 Is Sunday Supper a special dinner on Sundays?
No, it is a cook book written by Chef Suzanne Goin