Near the Playhouse, in one of the quaintest districts in Pasadena, a rare jewel sparkles in the Crown City—Maison Akira. Step off the bustling Green Street into the foyer door and find yourself halfway around the world in an elegant restaurant just off Cours Mirabeau in Aix-en-Provence, France. Though distinctly French, a peaceful Zen-like esthetic pervades the atmosphere. That is because Maison Akira is home of the world-renowned chef Hirose Akira. His menu is like a symphony of truly beautiful French classics, made modern and dazzling with subtle Japanese influences, like his signature Miso-infused Chilean Sea Bass, which has made him famous throughout the world.

The beautiful theatre district of Old Town Pasadena, a neighborhood of antique shops and specialty boutiques, is home to one of Pasadena’s best kept culinary secrets: Maison Akira. Opened in the early 1990’s Maison Akira is the love child of world-renowned Japanese chef Akira Hirose.

Chef Akira’s affair with food began as a child in his mother’s kitchen. His infatuation with French cooking began shortly after his father took him to a western restaurant when he was 12. He knew from that moment he would become a chef. His passion took him to France in 1973, where he would study with such masters as Joel Robuchon, and refine his expertise in restaurants such as Maxim’s and Hotel Nikko. In 1988 Chef Akira sought a new frontier and headed for Los Angeles, where he quickly rose amongst the world’s brightest culinary stars in restaurants like l’Orangerie, Peninsula Beverly Hills, the Ritz Carlton, and The Tower. He was finally able to realize his dream and open his own Maison Akira.

Upon entering the foyer, one recognizes the restaurant is a study in subtle compliments, the yin and yang of two cultures, artfully balanced. Near the door stands a display case where an assortment of champagnes, white wines, and a selection of pastries sets the tone for the temptations that await. The walls are a rich buttery yellow and Provencal décor is tastefully arranged through out the space, with three very intimate dining areas separated by rich curtains, as is common throughout France. The tables are draped with crisp linen tablecloths, with napkins folded origami style. Chopsticks are artfully laid alongside the silverware. The tables are set with an elegantly eclectic mix of traditional Japanese earthenware and European tableware. The Japanese minimalism works to enhance the ornate French influence. There are two small but open dining areas with some semi-private tables along the perimeter. A third seating area near the windows has a more Zen-like ambiance. The staff is sophisticated and low-key but extremely attentive and polite.

The lovely hostess escorted us through the curtains to the back room and promptly seated in us near the fireplace. After our waiter explained the specials of the day and the chef’s ten-course tasting menu the sommelier came to suggest the pairings. The wine list is generous, with most selections available by the glass. There is French Champagne and California sparkling, and a wide variety of white and red of both French and domestic grapes. Because we wanted both fish and meat, we decided to order our wine by the glass. We would have the opportunity to taste a different varietal with each course. It would make for a very adventurous evening.

The menu is extensive but not overwhelming, with each dish a subtle blend of the flavors of East and West. Many of the appetizers sounded like must-try items, and we ordered three, along with a glass of crisp and light Dampierre “Cuvée des Ambassadeurs” Champagne

The Bento Appetizer seemed like a good way to sample many different items in one dish. In one Japanese bento box we were served authentic French foie gras, seared scallops, chilled Maine lobster and sashimi. It was a thing of beauty, with the geometric wooden box arranged with the beautiful shapes and colors of the food. The foie gras, which was thinly sliced whole liver, not formed into a pâté, was earthy and rich, and contrasted nicely with the sweet lobster and scallops. The buttery yellowtail and tuna sashimi was extremely fresh and delicious.

We also ordered the Escargots Bourguignon, six tender and succulent spirals with just enough garlic to inform the palette.

Our third appetizer, the Onion Soup Gratine, was a small traditional earthenware pot of perfection: a smooth and velvety beef broth with caramelized onions, bubbly melted cheese and croutons. It transported us back to our favorite French Brasserie in Paris.

I could have stopped after the first course and gone home basking in the glory of the amazing combination of flavors we experienced. But that would have left me longing for more so we decided to share Chef Akira’s signature dish, the Miso Marinated Grilled Chilean Sea Bass on roasted vegetables and a bed of rice. The fish was sliced almost an inch thick and marinated in miso. It was then grilled to perfection, so the outside was slightly caramelized by the flames and the inside still moist and delicate. It was served with a honey lemon sauce that complimented the flavors perfectly. The roasted vegetables—eggplant, tomatoes, and zucchini—were a rich combination that accented the fish very well. Chef Akira served this dish to the Japanese Emperor and Empress in 1994 and it is truly worthy of a royal couple: it is sheer heaven. With this we ordered a 2004 Pouilly Fuissé from Domaine de la Chapelle. This medium bodied wine held up to the fire roasted fish and the slightly smoky eggplant. Its clean and dry flavor was an ideal accompaniment to the dish.

Still needing to experience more, we ordered the Grilled Snake River Farm Wagyu Kobe New York Steak in red wine sauce. It was cooked to perfection and literally melted in our mouths. It was served with roasted vegetables and a gratin of potatoes that were light and flavorful, and the subtle potato was not lost in the sauce.

We also tried the Pan Roasted Rack of Lamb in a rosemary sauce with potato mousseline. The lamb was succulent and flavorful, cooked to a beautiful pink. The sauce was stunning and complex with rosemary and perhaps a hint of soy, absolutely layers and layers of flavors. With this we ordered a glass of velvety Benziger Cabernet Sauvignon, 2002.

Because Chef Akira is also a renowned pastry chef, we knew we needed to try his desserts. His signature Timbal Elysee Laserre was a work of art. A crisp cookie wafer filled with hand made vanilla bean ice-cream, fresh berries and a caramelized sugar dome was almost too spectacular to eat. With a quick tap of the spoon, the dome shattered and we experienced a fantastic balance of texture and flavor. We also tried the flourless dark chocolate cake, served with raspberry and vanilla cream sauce. This was a rich and decadent dessert. Both items were fantastic paired with a glass of Sancerre and two cappuccinos.

We left our little table feeling quite clever for trying so many of the wonderful combinations found on the menu. It was an extraordinary experience and we were able to pair the flavors of France and Japan with delicious wines at every course. We were transported by the experience and laughed that we didn’t even have to suffer any jet lag. What a wonderful sojourn so close to home. This was a perfect way to celebrate a special occasion. 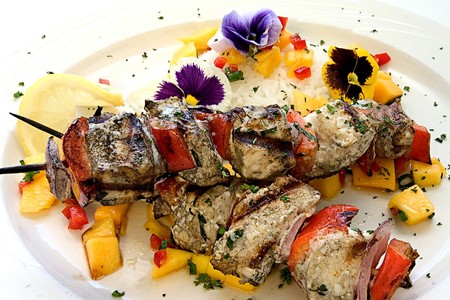