Opened in March 2005, Ocean and Vine is located in the gorgeous Loews Santa Monica Beach Hotel, next to Santa Monica pier. The swanky lobby sets the scene for an upmarket experience. The split-level, low-ceilinged room is attractive; the top level is dominated by a steel chimneyed fire pit, with striking artworks adding to the ‘wow’ factor. The cuisine, from Head Chef Robert Trester under the watch of Executive Chef Gregg Wangard, is Californian; each dish a showcase of local, seasonal ingredients. Dishes are near-faultless, and although prices are high, it’s worth coming here for a splurge or special occasion.

Ocean and Vine – A Shore Thing

Opened in March 2005, Ocean and Vine is located in the gorgeous Loews Santa Monica Beach Hotel, right next to the Santa Monica pier. The swanky lobby, dominated by lofty palm trees, sets the scene for an upmarket experience. For the bar and terrace area overlooking the beach, head straight to the far end of the lobby; to the left, just before you reach the bar, is Ocean and Vine.

We arrived early but the restaurant was empty so we were shown to our table straight away. We asked to sit by the window and the hostess said that she had a great table in mind; the reality was a slight letdown as only one of us had a sea view, and even that was partially obscured by curtains (my companion, meanwhile, faced the buildings behind the hotel). Still, settling into our high chairs and tucking into an array of fantastic breads (crispy parmesan-coated flatbread, olive bread, ciabatta), we weren’t complaining. We took a few minutes to examine the sleek surroundings. The split-level low-ceilinged room is attractive; the top level is dominated by a steel chimneyed fire pit, with striking artwork adding to the ‘wow’ factor. Although the place was quiet when we first arrived, it filled up later with a mixture of customers – solitary diners (possibly hotel guests), small groups, and couples. This created the perfect atmosphere – classy, but not pretentious.

Our waiter, John, took care of us throughout most of the meal, and was ultra-friendly and chatty (but not overly so). He explained how the wine pairings worked, but was also honest enough to admit that he wasn’t too familiar with a particular dish that we inquired about. As we perused the menu we were served a dainty, melt-in-the-mouth amuse-gueule: a featherweight philo tart with minced mushroom filling, topped by whipped truffle cream and tiny pieces of asparagus.

The cuisine, courtesy of Head Chef Robert Trester under the watch of Executive Chef Gregg Wangard, is Californian, each dish a showcase of local, seasonal ingredients, and the quality is outstanding. And if this little introduction was a taste of things to come, we were in for a treat.

Our appetizers arrived quickly, before the amuse-gueule plates had been taken away. Both the Seared Hudson Valley Foie Gras with Fresh Lentils, Mole Negro, and California Quince and the Arugula-Speckle Green Salad with Red Wine Poached Pear, Bleu Cheese Baklava, and Thyme Vinaigrette were excellent. The foie gras was good quality, and perfectly seared; the quince jam created a nice sweet-sour balance. Rather than one integrated mix, the salad was deconstructed to show off the ingredients separately. The vinaigrette was slightly too sweet for our liking, and the arugula just a big dull pile of leaves, but the pear was gorgeous – thick slices beautifully fanned out, but still in one piece – while the triangular piece of baklava was delectable: a warm pastry with bleu cheese (tangy but not too overpowering), and chopped walnuts. We could’ve eaten ten more.

Presentation at Ocean and Vine is a forte: the food is served on elegant square china plates, nouvelle-style. Thankfully, the portions aren’t nouvelle – they’re a decent size, yet not so huge that you cannot manage three courses (although your wallet may not thank you for it). We also like the eclectic mixture of styles – for instance, if you order mineral water, the Fiji bottle rests in a pewter stand; but it’s then poured into thick glass tumblers rather than tall-stemmed glasses.

Entrées were of a similarly high standard. One of our choices was the Slow-Roasted Shelton Farms Free-Range Chicken with Golden Potato Confit, and Silky Carrot Purée. The potatoes were good, if a tad boring. But the chicken was undoubtedly the star of the dish, comprising five large chunks of moist, tender white meat, with really crispy skin of the kind we can only dream about being able to achieve at home. The other entrée – Pan-Seared Baja Sea Scallops with Crispy Shrimp Paella, Red Pepper Coulis – was less than perfect because although the scallops were thick and beautiful to look at, two were a little rubbery and the other tough and inedible, as if they had been overcooked or sitting around for too long. We had expected the shrimp to be part of the paella, but not so: the rice was a gooey delight (the consistency was almost like, dare I say it, Rice-A-Roni). The hot crispy shrimp, scattered around the dish, tasted like hot, garlicky popcorn shrimp. Although we left two of the scallops, we finished the rest of the dish.

When it came to selecting a dessert, we had room, but were spoiled for choice. As well as a range of sweet treats – including the cutesy option of a trio of cupcakes with milk – there’s also an excellent range of artisan cheeses. Indeed, the chef here may be Trester, but the hallmarks of Wangard are evident, namely his love of cheese (there’s also his signature cheese fondue for starters). But we were in the mood for something sweet.

Desserts, created by Pastry Chef Francisco Lozano, were superb. Small Fuji Apple Fritters were crispy on the outside, smooth and creamy like custard on the inside. John brought the dish over, then, for the pièce de résistance, poured a china carafe of warm apple cider syrup around the fritters. A scoop of creamy caramel ice-cream (which tasted more like vanilla) was dollopped seductively on top. Phyllo Caramelized Banana Tart with Vanilla Bean Ice-Cream comprised two crispy tarts with smooth, creamy fillings. Annoyingly, the top of one of the tarts was a little burnt. Okay, not a disaster, but at these prices you expect perfection.

To match the quality of the food, there’s a stunning California-led wine list, with more than 40 choices by the glass. The wine pairing and wine flights ideas might seem clichéd to some, but for ditherers like us, it’s a bonus. Of the two glasses we tried, the David Noyes Tocai ’04 from the Napa Valley was deliciously fruity and dry; the other, the La Vie Vineyard ‘Pretty in Pinot ’04 from Santa Barbara, wasn’t especially to our liking, but we were glad we tried it. The flights aren’t limited to the wines, either: on the night we visited, a ‘market inspired flight: artichoke’ featured on the starters list, while desserts included a Valrhona chocolate flight. Great stuff.

Small lapses aside, we loved Ocean and Vine, and felt that the quality of the food was superb. It’s pretty pricey, but worth a splurge for a special occasion. 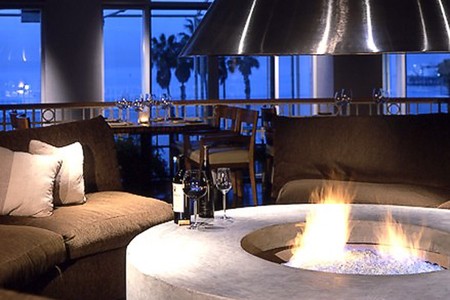