An experience at Osteria Mozza is one of a kind. The brainchild of super-trio Nancy Silverton, Mario Batali, and Joseph Bastinach, Osteria Mozza is a modern, urban interpretation of the Italian trattoria. Exquisite preparations start at the Mozzarella bar, which sits in the center of the room and serves as a showcase for Silverton’s hand-made cheeses. Her creations can be sampled alone, but also find their way onto the rest of the menu, joining hand-made pastas, artisanal smoked meats, and inspired main courses, turned out by Executive Chef Matt Molina. Add exceptional service, a lively, energetic setting, and an Italian-centric wine list, and the only challenge guests face is saving room for dessert. 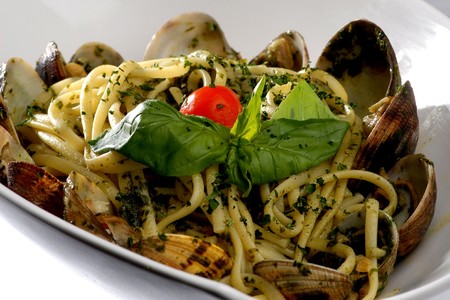 Antipasti from the Mozzarella Bar

A great restaurant is also about service

My dad and I had hoped to celebrate his 63rd birthday at Osteria Mozza, but we were let down...big time. We had made a reservation for 8:30pm. While waiting for over 45 minutes, I noticed that the staff was not as nice as when I had last been there. Their idea of atonement for making us waiting almost an hour was a couple of pieces of their standard appetizer fare, which is basically a cracker with a little mozzarella and oregano sprinkled on top.

No one cared that we had become fixtures at the entrance. Not until my dad asked for our bottle of top-notch Bordeaux that we had brought with us did the manager even speak to us. At that point, it was too late. Although I tried to talk my Dad out of leaving, since the manager promised to "take care of us," the damage was done. My Dad felt slighted. Our table was given to someone else, perhaps someone considered more important than us or someone who had tipped the maitre de.

Little did the staff know that I work for Sony Pictures and am in contact with people in the entertainment business who like great food. Passing judgment on first impressions is something I detest, and it was done to us. This experience has convinced me never to go there again. In fact, I plan on telling my colleagues at Sony, as well as my boyfriend who is an A-list producer at FOX, about my experience there.

This kind of attitude might work at the velvet rope entrance of a club, but it doesn't work at a restaurant that is supposed to have 1 Michelin star. Hopefully, Michelin will realize that Osteria Mozza is not worthy of a star. I've eaten at Osteria Mozza many times but will not do so again. A restaurant is about a lot more than great food. Service is the other half of the equation.