After seven years of success in the North Hollywood Arts District, Paul Hibler and David Sanfield took their Pitfire Pizza concept downtown in 2005. Across from St. Vibiana’s Cathedral and in the shadow of skyscrapers, office workers flood this modern Italian café at lunch for thin-crust pizzas, hearty pastas, and market-fresh salads. At night and on weekends, the rush subsides and Pitfire offers a more relaxed dining experience with the same value. Order at the counter, where a board lists seasonal specials and fresh-baked desserts are on display. To drink, there’s fresh sangria and watermelon lemonade, plus wine and beer.

When Paul Hibler and David Sanfield opened Pitfire Pizza Company in North Hollywood’s Arts District in 1998, they quickly built a dedicated following for their thin-crust pizzas, hearty pasta dishes, and affordable prices. After seven years of success, they opened a downtown location in August 2005, mirroring many of the original venue’s finer points.

Bracketed by St. Vibiana’s Cathedral and the stylish, Thom Mayne-designed Caltrans District 7 Headquarters, and only a short walk from the LA Times and City Hall, the downtown location attracts flocks of office workers for lunch. At night and on weekends, the rush subsides at this modern Italian café and Pitfire offers a more relaxed dining experience with the same value and casual atmosphere. With a burgeoning bar scene in the neighborhood, the restaurant also serves as a quick, satisfying precursor to a night out.

After perusing the seasonal specials board, I ordered at the counter and was given a number to take to a table of my choosing. The contemporary restaurant features an olive and terra cotta color scheme, high brick walls, olive-green booths, boxy yellow lanterns and sconces, and four paintings depicting Italian staples: wheat, tomato, garlic, and olives. For solo diners, there’s a central communal table with high silver chairs. Each table features a small vase holding a vivid Gerbera daisy and a bottle of chili flake-infused olive oil, which is excellent for dipping slices of warm Italian bread or excess pizza crust. Outdoors, along Main Street, there’s a fenced-in sidewalk patio with metal furniture, good for people watching at lunch but desolate after dark.

The centerpiece of the kitchen is a large pizza oven lined with white ceramic tiles, with towering flames licking at its large mouth. Pitfire’s motto is “the crust you can trust,” and the crust is indeed reliable, with a pleasant chew. Although, I do feel it could be crisper, to better hold toppings. The standard pizza has a ten-inch diameter, with four small slices for one person. After 3 p.m., post-rush, 16-inch “big pies” are available. Hibler and Sanfield have clearly put a lot of thought into their topping combinations, which fuse consistently and deliciously. I was particularly happy with Pitfire Sausage, with crumbled fennel sausage, San Joaquin tomatoes, red onions, and three cheeses: Bel Paese cow’s milk cheese, Fontina, and mozzarella. Multiple cheeses often appear on Pitfire pizzas. The Wild Mushroom pizza hosts four cheeses, plus parsley, sage, rosemary, and thyme. Simon & Garfunkel sang about that particular quartet of herbs in “Scarborough Fair,” and after tasting them together, it’s easy to understand why. Another intriguing vegetarian option is the hefty Tuscan Pie, topped with roasted potatoes, onion marmalade, blue cheese, walnuts, and rosemary. There are even two “folded” pizzas, which are baked normally, then folded over, almost like a calzone. The Folded Garlic Chicken option is solid, but the more enjoyable version, the Folded Fennel Sausage, contains fennel sausage, hearty tomato sauce, and mozzarella. If none of the combinations appeal to you, there’s always the option to “be an artist,” and top a “basic” mozzarella and tomato pie with ingredients from their list. It may be risky, but it’s possible to pair anchovies with onion marmalade, pesto, and salami.

The restaurant’s name is pizza-centric, but there are certainly other dishes worth ordering. Linguini Bolognese features a slow-simmered ragu of sausage, veal, beef, pork, and tomatoes, enriched with small amounts of Parmesan and cream. Even though it was misnamed, I really enjoyed the simple Mac & Cheese. Instead of using traditional elbow macaroni, pasta shells are baked with gruyere, mozzarella, gorgonzola and Parmesan cheeses, emerging from the oven crispy on top and gooey underneath. A lighter option is spaghetti with tiger shrimp, pesto, roasted garlic, white wine, parsley, lemon zest, and butter. In winter, don’t pass up the harmonious eggplant and goat cheese ravioli in “oven-charred” tomato sauce. Whatever the pasta, the bowl comes topped with a warm slice of Italian bread. Don’t forget about that chili-powered olive oil.

As for drinks, the cashier ladles fresh sangria and watermelon lemonade from containers near the register. The refreshing lemonade beautifully melds sweet watermelon and tart lemons. A well-balanced wine list features some real bargains, including ten wines by the glass. There are also some appealing bottles, like a 2003 Teira Zinfandel, from Sonoma County, and a 2003 Benton Lane Pinot Noir, produced in Oregon’s Willamette Valley. On the beer front, bypass the standbys and opt for one of the rarely seen bottles. I was especially taken with the Widmer Brothers Hefeweizen, brewed in Portland, Oregon, and Pinkus Organic Pilsner, from Germany. Pitchers of Redhook Extra Special Bitter are also a popular pizza or pasta pairing.

For dessert, return to the counter, where a small number of fresh-baked goods are on display, including large chocolate-studded cookies, rich brownies, and if you’re lucky, cupcakes with a moist carrot cake base and cream cheese frosting. If you’re feeling really ambitious, order the chocolate pudding cake, a moist chocolate brownie bathed in warm chocolate pudding.

Given Hibler and Sanfield’s dedication to market-fresh ingredients, generous portions, interesting aesthetics, and low prices, it would be surprising if they wait another seven years to open a third Pitfire Pizza Company. In the meantime, their downtown branch is a worthy destination. 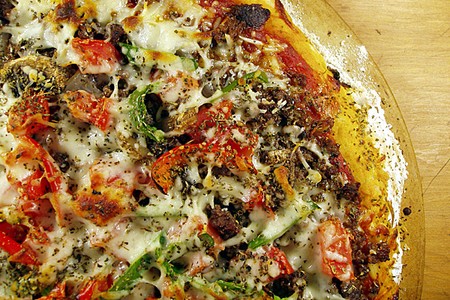