Located in the trendy Melrose district of West Hollywood, Pizzeria Mozza touts some of the biggest names in the culinary world: founding partners Nancy Silverton, Mario Batali and Joe Bastianich. With a trio like that at the helm, you know you can expect something good. If you’re not feeling like pizza try Nancy’s chopped salad or Monday’s dish of the day, featuring Ricotta cannelloni. With a fun, informal atmosphere Mozza offers the opportunity for a fantastic meal. Avoid the hassle of waiting and be sure to book in advance.

In the ring with three culinary champions

Like the rest of the world, I am drawn to Mr. Molto-associated restaurants like a bee on honey. Should you not have divined it, I am speaking of one Mario Batali, the inimitable chef famous not just for his soulful Italian food but for his vibrant personality. Batali, and sidekick Joe Bastianich, of Lydia Bastianich fame, are partners in Pizzeria Mozza, their first West Coast venture.

However, the real heart of Mozza lies not with these two men, but with a woman who, while she may not have reached Batali’s unique celebrity cult status, is certainly a celebrity in the Los Angeles culinary world. If you do not know her, just turn over any of those artisanal breads that you can buy packaged in rustic burgundy and white paper from any major supermarket throughout Southern California. As the founder of La Brea Bakery, Nancy Silverton brought it to you. In addition, she co-founded the restaurant Campanile and is the author of several beautiful cookbooks. For foodies, Pizzeria Mozza is the boxing ring of three heavy weight champions of the culinary world. Diners who enter that ring are looking to be knocked around a little.

Taking their respective reputations into consideration, you can imagine how high my expectations were for Pizzeria Mozza.  I was like an impatient child in line at Disneyland. Really, that is what it was like because, as I only called five days in advance, the only reservation available was at 12:00, right when Mozza opens. When my mother and I arrived at 11:50, we waited on a bench next to a couple with a baby in a stroller, a group of three late-twenties guys, and a group of four late-forties women, all anticipating entrance into the magic kingdom.  As I danced around outside and impatiently peeked through the windows, I had a fair opportunity to scope the place out.

Only these three could score a location like this in the first place, right at the intersection of Highland and Melrose in West Hollywood. Just adjacent to its more formal and more expensive counterpart, Osteria Mozza, the pizzeria is easily identified by its hard-to-miss, bright yellow facade with a tangerine awning that provides shade for those who might be lined up outside. Above the awning, in fire-engine red, is the restaurant’s logo: a big M with a banner running across its middle that reads “Mozza.”

When 12:00 came and we were shown inside, I found the interior design to be just as I’d found the exterior—simple but full of life. The vibrant contrast between the orange and yellow walls, blue ceiling, and rustic wooden surfaces excites the senses in anticipation of what’s to come. At first, the restaurant can seem spacious inside because the ceilings are so high but don’t be deceived; Mozza, with approximately 13 tables and 20 bar seats, is a tiny restaurant. Take that into consideration when you plan on visiting. Though it’s open continuously from 12:00PM to 12:00AM every day, be sure to make reservations well in advance as the place is often completely booked. Seats at the bar cannot be reserved but, as you might imagine, fill up within the first hour of the restaurant’s opening. If you want to sit at one of the bars, you’ll probably have to wait or go at 4:00 in the afternoon; although, if you get a seat at the right one, your time will be rewarded with a full view of the pizza prep area and the unique wood-burning oven.

Once we were seated at our table, just inches away from neighbors on either side, my mom and I were immediately delighted with our table’s set-up. Each diner’s space is marked by a paper mat with something fun to read scrawled across it—mine was a recipe for pizza margherita. You also get some breadsticks to start, wrapped in white parchment paper, and your silverware comes in a charming little paper bag with the M logo on it. These place setting details, in addition to the servers’ bright aprons and the colors of the walls, set a lighthearted, fun tone in the restaurant. I immediately felt comfortable.

It’s the attention to detail in the food, too, that sets Pizzeria Mozza apart from other pizza producing venues of a similar mien. While pizza may be written in the biggest font on the menu, there are many other stars with which it shares the light. From the selection of antipasti, we ordered the Eggplant Caponata. The dish, composed of large chunks of eggplant, onions, pinenuts and currants, arrived piled into a little soup cup. Because it was devoid of the traditional olives and tomatoes, this dish was darker in color, heavy on balsamic vinegar with just enough of sweetness to mediate it, and finished with a good amount of spiciness to boot.

We also ordered the White Beans alla Toscana from the bruschette section of the menu. This consisted of three warm, toasty slices of bread lined up on an adorable miniature wooden pizza peel and generously topped with dollops of white bean puree, extra virgin olive oil, rosemary, and a drizzling of sweet, syrupy saba on top that gave both the flavor and the color of the white beans a contrast point. The surprise of the dish lay underneath the puree where were placed small leaves of tender roasted radicchio that provided the only flavor missing from the dish- a touch of bitterness and, again, a little extra color.

Tackling the pizza menu involved a few tough decisions, but we finally settled on one with squash blossoms, burrata (the deciding factor, really) and tomato, as well as one topped with fingerling potatoes, gorgonzola, radicchio, and rosemary. To me, the toppings matter, but the crust is at the core of any pizza making operation and this one I had awaited with much anticipation. I had heard about Silverton’s crust endeavors from an employer of mine, a Boston baker who was acquainted with Silverton and went to visit her in L.A. before Mozza’s opening. She came back raving about the addition of malt to the dough, and the resting time that Silverton allows it—a full 36 flavor imparting hours. The resulting crust is indeed flavorful, pleasantly yeasty from its long rest, in addition to being lightly crispy from first bite to last, while still maintaining a bit of chewiness. It’s not, that is to say, crispy like a cracker, and when you bite into the highly formed edge crust, you can see why: that web-like gluten structure that had a chance to develop within the 36-hours. Despite all its merits, I had some qualms with the crust: Because I liked its flavor, I wished that the crust were a little thicker so as to stand up better to the strongly flavored toppings.

Both pizzas were remarkable in their presentation, astounding us with just how pretty they were. Our first was covered in a layer of delicate, charred yellow squash blossoms, dotted with plum tomatoes and finished with four gobs of sea-salt sprinkled burrata, that incomparably delicious, gooey cheese made from mozzarella and cream. The second was a study in dark, earthy colors and flavors, spread with roasted, crushed fingerling potatoes, roasted radicchio, pungent gorgonzola cheese, and woodsy whole rosemary needles. While this pizza was lovely to look at, and still enjoyable to eat, we both felt that overall the combination of the radicchio, cheese and rosemary was overwhelmingly bitter.

Try to save room for dessert. The little girl next to us ordered the butterscotch budino and, face and hands covered with caramel, seemed more than delighted with her choice.  (She’s not alone; New York Times food critic Frank Bruni once described it as a “pudding to shame all other puddings”). I went straight for the seasonal item: so-called Pumpkin Gelato Pie, a giant wedge of Thanksgiving-flavored Italian ice cream sitting at least four inches tall on its spiced gingersnap crust. The pie would be just a lot of uninterrupted gelato to eat, but the candied pecans, enormous plump golden raisins and rum raisin sauce that are drizzled and strewn around it add different textures and flavors to each delicious bite.

Was Pizzeria Mozza the magic culinary kingdom that I’d hoped? Perhaps not entirely; certainly the pizza wasn’t as life-changing as I, quite unfairly, hoped it would be. But here’s the thing: I had a truly fantastic meal there. For one thing, I could have eaten those little antipasti and bruschetta plates all day. For another, the food is the kind that encourages conversation and camaraderie among diners. Whether it be among the friends with whom you came or the people at the table next to you, everyone at Mozza seems to be talking. That’s the kind of place where I want to eat a pizza. 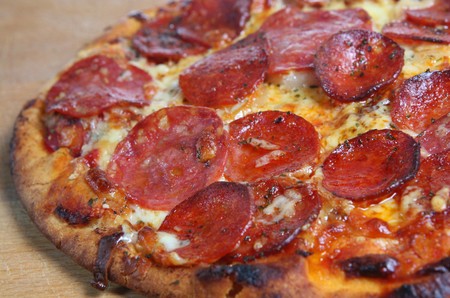