Chef Andrew Pastore’s Pacific Rim menu is so elegant, exotic, and beautifully presented, it’s a shame dishes aren’t delivered to tables by elephant. Transcend Hollywood’s club scene into a Zen-like wonderland that calms the senses, enlivens the soul, and thrills the palate. Ritual is located on Cahuenga Blvd., just north of chaotic Hollywood Blvd. It is the pricier, hotter, more attractive cousin of its predecessor White Lotus. Ritual’s food and ambience will make you forget you’re in Hollywood, and its transformation into weekend Hollywood hotspot is a feat to make you forget about any other nightclub this side of La Brea.

Formerly known as acclaimed club White Lotus, Ritual opened its doors in the summer of 2007 with a revamped menu and aesthetic facelift. Executive chef Andrew Pastore, who opened White Lotus and was also behind the Hollywood launches of the Sunset Room, Pig’n Whistle, and Cabana Club, anchors Ritual’s new cast.

The differences between Ritual and White Lotus are significant. The sushi menu has moved on, replaced by pricier, more elegant Pacific Rim fare that includes shareable appetizers, simple yet decadent entrees, and a dessert menu that rivals that of any restaurant west of the Mississippi.

Through Ritual’s giant, heavy double doors, diners are transported into a Zen-like wonderland that plays supper club during the week and turns into Hollywood hotspot during the weekend. High ceilings, dim lighting, and an abundance of dark wood and candles set the mood immediately upon entry. Although it was early on a Thursday night and we announced that we had dinner reservations, a security guard asked to see proof of age, leaving no doubt that Ritual is both nightclub and restaurant.

Once inside, the atmosphere was far more welcoming than the door staff. The outdoor seating area is comprised of long rows of tables and a perimeter of cushioned banquettes. A giant water feature is the center of attention, and hundreds of candles set the mood. Canopies tented thirty feet high give just a glimpse of Hollywood starlight, while heating lamps that just out from the walls provide ample warmth. The feel is romantic and decadently exotic.

If the ambience still doesn’t impress you, the food will. Hawaiian Ahi Tuna “Poke” with fresh pineapple, organic cucumber, spicy soy sauce, and sesame wonton crisps is a delightful twist on the original. Served in a carved-out pineapple with an abundance of fruit, the dish is aesthetically pleasing, to say the least. Sliced avocado balances the spicy soy sauce well, and the crunch of the organic cucumber mixed with the spicy tuna poke is a most pleasing sensory experience. Although this dish does have some heat, the dance the spicy soy did on my tongue was pleasant, not like the fire-breathing, sweat-inducing heat of hot peppers.

The Ritual Sampler Platter is another excellent starter. The menu advertises that the platter is for 2-4 people, but the portion is probably closer to two people with healthy appetites. I say this because after you try some of these components, you’ll want to go back for seconds and will be disappointed if they’re not there. The platter consists of five coconut shrimp skewers with mango chili, four teriyaki filet skewers with sesame and scallions, three lobster dumplings and four tempura squash blossoms with ricotta and porcini mushrooms. Each dish is portioned on a smaller, puzzle-piece-shaped dish for sharing.

The lobster dumplings, perched in large soup spoons, were perfectly cooked and chock-full of fresh meat. The coconut shrimp skewers were subtle, not saccharine like the overly-breaded miniature shrimp that lesser restaurants deep fry and pass as coconut shrimp. These shrimp were lightly breaded, their crunch more like a delicate fritter than coconut shrimp. The final two components of the Ritual Sampler Platter alone are worth ordering the entire dish to get to eat. Teriyaki filet skewers are tender, cooked in a sweet and sour teriyaki sauce that warms the mouth like liquid candy. The steak is exceptionally tender. But the tempura squash blossoms are this platter’s crowning jewels. These savory, crunchy delights are filled with creamy ricotta cheese and porcini mushrooms. A hint of truffle oil provides a heavenly aroma.

After an appetizer duo like the above set, it’s easy to doubt that the second course could possibly match its predecessor. At least two entrees on the menu, however, surpass these exceptional starters.

The Vegetarian Open Faced Ravioli entrée is initially attractive because it is one of the few vegetarian entrees. Filled with perfectly cooked shiitake, chanterelle and blue foot mushrooms, the ravioli is balanced with a ricotta mousse that is rich and succulent. Sweet peas dot the dish, and truffle oil reappears to round out the flavor. The excellent portion is friendly to both herbivores and omnivores; Pastore doesn’t hold back the flavor on what could potentially be a delicate dish. It stood up well against our second selection.

Our server recommended the Diamond Ranch Shanghai Short Ribs. This generously portioned dish sits atop grilled Chinese eggplant, sweet peppers, cashews and a rib bone. No knife is required for this savory entrée. The tender, organic meat frees itself into a manageable bite with just a twist of the fork and dissolves in the mouth. The meat hides the delicious vegetables that lie in wait underneath; these little surprises complement the short ribs wonderfully.

We were stuffed after these four dishes, but had to try The Holy Trinity of Cup Cakes, which brought this religious experience full circle. The dessert, also portioned for two guests, includes nine miniature cupcakes in red velvet, candied lemon, and chocolate chip overdose. These bite-size beauties were more than enough to sate our sweet tooth and complete a most excellent meal.

It’s unfortunate that a place this consistently appealing isn’t packed to the gills every day of the week. As far as scenery goes, Ritual is unparalleled. The atmosphere, food and pleasant service are all superlative. If you’re looking for the energy that comes with a packed weeknight restaurant, however, Ritual disappoints—in that area alone. This restaurant deserves to be busy, full of beautiful, trendy socialites and their well-to-do companions. And on weekend nights, when the club’s line stretches down towards Hollywood Boulevard, it is. But on the night I went, my table was the only one in the restaurant until my second course arrived. By the time I paid the check, there were three other tables in the restaurant—two large parties and another couple. So the group scene seems to reign supreme at Ritual, for now. But it is also an ideal restaurant for a special date. The abundance of candles, dimly lit dining room, and serene water feature create an unbeatable aura of romance. And if Ritual’s beautiful menu doesn’t inspire courage, the stiffly poured specialty cocktails from the bar certainly will. 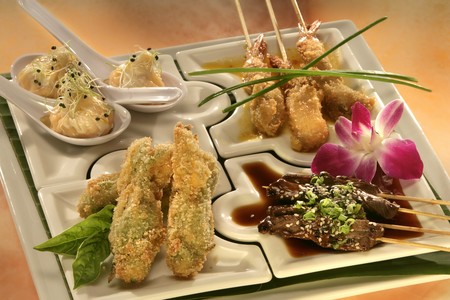 For the $$ spent, it was definately not worth it. Drinks are extremely overpriced and food was moderate, at best. Food presentation was excellent but taste was very salty. Would never like to return for a second experience.