Nested in the center Newport’s ritzy Fashion Island, Roy’s offers a high-end dining experience which combines the freshest Pacific ingredients with European culinary techniques and Asian spices. While the service is not always spectacular, the food speaks for itself, from perfect lobster potstickers to perfect scallops to a dangerously palatable Hawaiian-style cosmopolitan. The atmosphere is dressy, yet comfortable, with a hipster musical playlist, older women wearing Chanel and pearls, and young girls in trendy boutique dresses. This is less of a place to be seen or treated like royalty, and more of a place to enjoy quality cuisine.

Nested in the center of Newport’s ritzy Fashion Island, Roy’s is located among hotspots like Blue Coral as well as more casual alternatives such as P.F. Chang’s and California Pizza Kitchen. But it only takes one step inside of Roy’s to dissolve any notion of its mall-like surroundings.  The high ceilings, warm lodge-like colors, and spinning fans hearken to the islands, transporting diners into a scene that seems far away from home. Decorative hanging lamps and aerodynamic-looking cutlery evoke a certain understated sense of hip amidst the welcoming aura of the dining room.

The crowd is varied – there are older couples sensibly clad in Prada and Cartier, and young couples in boutique dresses and designer jeans.  The restaurant immediately conjures an air of extravagance, but without the “see and be seen” pressures of most trendy restaurants.  The formal service and the indie rock playlist pose a welcoming juxtaposition that satisfies diners of many ages.

Owned by Tokyo-born Chef Roy Yamaguchi, who coined the term “Hawaiian Fusion Cuisine,” this Roy’s is one of many modeled after the first Roy’s restaurant, which opened in Hawaii in 1988.  At the Newport location, Yamaguchi’s longtime protégé, chef and partner Chris Garnier, heads the kitchen.  A St. Louis graduate and direct culinary descendent of Yamaguchi, Garnier pays great attention to quality ingredients, as well as presentation and creative fusion.

We made reservations to visit at 9:30 on a Saturday evening. Once seated, it only took moments to recognize Roy’s allegiance to traditional service, as well as a certain sense of trendiness, especially regarding the cuisine.  The key is that Roy’s values ingredient quality over anything.  Flown in daily from Hawaii, the seafood speaks for itself, and is paired with both European techniques and Asian flavors.

While the menu is relatively concise, only listing those dishes that are freshest that day, the drink list is expansive, with a wide array of wines, as well as a slew of tropical specialty cocktails including a lychee caipirinha and a passionfruit bulleit.  All the cocktails utilize fresh tropical ingredients to create a playful twist on classic drinks. Roy’s also offers their own brand of sake, as well as wines by the glass and bottle for those who aren’t in the mood for hard alcohol.

We opted to start with the Crunchy Golden Lobster Potstickers, the Da Crunch sushi roll, and, due to some expert pushiness from the server, Mai Tais all around.  “And what will you enjoy?” he pressed for our entrees, in the tone of a well-rehearsed Victorian play. We were quickly supplied with edamame, which paired perfect warmth with large granules of crunchy sea salt, offsetting the chewy green bean.

Our appetizers arrived promptly, and were immediately devoured, with no requisite politeness over the last remaining piece.  In the Crunchy Golden Lobster Potstickers, the lobster was kept in large, succulent chunks, maintaining its true texture, yet fitting into a perfect bite-sized pocket.  The Da Crunch roll had a perfect balance of batter and fresh fish.  The crunchy exterior was soon followed by creamy avacado, and then the spring of snow crab and shrimp tempura.  The spicy Malaysian Curry Aioli drizzled on top of the roll not only made the dish aesthetically pleasing, but also added a warm, sweet spice to offset the bite of the wasabi. This, combined with our Mai Tais, which had the undeniable flavors of fresh fruit, evoked a sort of giddy, vacation-like charm.  For a moment, we forgot we were in the middle of a shopping center.  That is until our plates were whisked away and we were pressured to put in our dessert order early. (At $30 a plate I expected to be allotted some time to breathe and enjoy my food.)

Nevertheless, my main course – Herb Seared U-10 Sea Scallops atop a bed of asparagus risotto – completely cured me of any sense of displeasure. I’ve used words like “fluffy,” and “pillowy,” and “cloudlike” to describe scallops before, but after one bite of my dish, I wished I hadn’t. These were easily the best scallops I’ve ever had, and I felt the need to demote all of my previous scallop praises to “pretty good” by comparison.  The risotto seemed to melt away with each bite, leaving behind a cream coated, yet crisp piece of asparagus.  The mild and soft risotto and al dente asparagus were the perfect parentheses for the flawless texture of the scallops.

Surprisingly enough, the Braised Lamb earned Roy’s respectable marks in the “turf” department, with its light hoisin-based sauce that did little to interfere with the meat’s essence. I have attempted to cook lamb in an Asian style in the past, only to find myself craving tzatziki or spanikopita afterwards. However, Roy’s prepared this lamb with such tenderness and deep infusion of the sauce that the usual gaminess of the lamb embodied an almost Belgian comfort-food quality, with an unmistakable Asian twist.  It was quite a surprise.

The Hibachi Style Grilled Salmon with citrus ponzu sauce was moist, and presented on a picturesque bed of perfectly sautéed Japanese vegetables, and, much like my first dish, made me immediately appreciate Roy’s devotion to fresh Pacific ingredients. The flavor of the fish was condensed, yet light – not like the somewhat starchy quality of most store-bought salmon. Again, the vegetables were crisp, providing a contrast between them and the fish.

After the main course, our server coerced me to order the Pineapple Upside-down Cake. The cake was dry, but salvaged by the perfect house-made coconut ice cream.  Had I planned ahead, I might have taken my server’s suggestion to order Roy’s infamous Melting Hot Dark Chocolate Soufflé (which needs to be ordered early on in the meal), as it is apparently a flawless piece of work.

Overall, I would assert that Roy’s works mainly because of the food – a perfect fusion of local quality and Western culinary tradition. 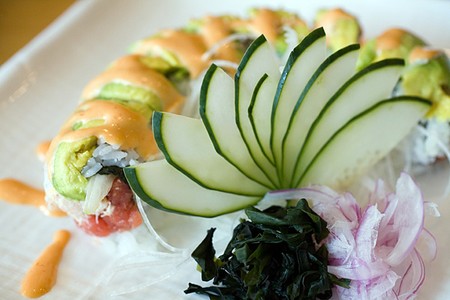 Blending classic and contemporary, with an emphasis on Hawaiian seafood