In May of 1999, Bill Chait, Danilo Terribili and chef Jeff Sladicka partnered to open this Studio City restaurant specializing in mesquite-grilled meat and seafood. The second floor hosts a sleek black lounge and a dining room framed by wine racks, but the real action is downstairs, in a boisterous dining room with views of the exhibition kitchen. At lunch, expect to find entertainment execs. During the week, Spark draws locals, and on weekends, it’s a dater’s playground. Signature dishes include Roman-style pizzas, grilled Atlantic salmon, and steaks. No matter what you order, save room for the house-baked apple walnut cobbler.

Bill Chait, Danilo Terribili, and Chef Jeff Sladicka partnered on the maiden Spark Woodfire Grill in May 1999, opening a restaurant that specialized in mesquite-grilled meats and seafood. The trio built the Studio City flagship around three pieces of wood-fired cooking equipment: an Italian open-hearth oven, a 1700-degree steak broiler, and a mesquite grill. The concept took hold and there are now branches in Huntington Beach and Beverly Hills. While Spark’s owners may have divided their focus, they’ve managed to keep the Studio City original vital.

Spark faces a stretch of Ventura Boulevard best known for sushi restaurants, with a patio and brown awning on either side of the entrance. The grill’s heavily stylized logo is featured above the front door, with the “A” represented by a man in a trench coat who looks like he stepped out of a ‘30s gangster movie.

Osvaldo Maiozzi designed the spacious interior. Downstairs, the dining room features a Brazilian cherry floor, a canary yellow east wall, and a view through glass of an exhibition kitchen. Diners can watch white-coated, black-hatted chefs buzzing around the flying embers that kick up from the mesquite grill and flitter out the mouth of the wood-burning oven. Tables are blanketed with cream-colored cloths and paired with sumptuous cushioned seats of the same hue. Each table holds brown, Swiss-cheese-patterned candleholders. A wall-mounted blackboard lists daily specials written in multi-colored chalk. Near the front door, a short coral travertine bar touts marble and limestone accents. The ambient music is noticeable interesting and decidedly up-tempo, including songs like David Grey’s “Babylon” and Rilo Kiley’s “Silver Lining.”

In 2001, Jeff Sladicka and Bill Chait worked with Maiozzi to add an upstairs dining room and wine storage facility. An alley to the west of the restaurant leads to a rear staircase that delivers diners to a corner lounge. The small room features cork floors, black leather couches, cubes and ottomans, plus two flat screen TVs built into the walls. The walls are lined with black river rocks and shimmering Bisazza mosaic tiles. A tiny granite bar accommodates a few black-and-silver high-top chairs. A short walk past the temperature- and humidity-controlled wine closet leads to the upstairs dining room. The airy room hosts light grey carpeting and three fully stocked wood wine racks on three of the walls. The furniture consists of white clothed tables, brown banquettes and zebra-patterned chairs in earth tones.

Sladicka oversees daily operation of the restaurant with his wife, and the restaruant’s manager, Laura and considers Spark “the Cheers of the neighborhood,” due to the restaurant’s versatility. Executives from nearby studios frequent Spark for business lunches, then return at night with their families for dinner. On weekdays, diners are predominantly locals. On weekends, the clientele expands to incorporate couples on dates. No matter the meal, the entertainment industry is normally represented. Working actors feel comfortable at Spark due to the low-key vibe.

To begin this dinner, Spark served a complimentary plate of fluffy sliced ciabatta with a metal dish of olive tapenade, a tangy blend of chopped green and black olives.

Spark houses a full bar and features a compelling cocktail list. The waiter touted the skills of Spark’s bartender, so I ordered a Spicy-Tini. This turned out to be a very good idea. The bartender shook Absolut Peppar with bloody Mary mix until chilled, then served the cocktail in a martini glass with a dusting of ground black pepper, a salt-lined rim, and a lime wedge skewered with two pimento-stuffed green olives. The drink had a terrific balance of spice and tang.

We started with a Roman-style wood fired pizza, the Arugula, Shaved Pecorino Romano, and Prosciutto, cut into four slices. The thin crust pizza was pliable, treated to a touch of olive oil, and zero tomato sauce. The pizza’s texture was akin to pita bread, just a few millimeters thick. The base was topped with a veritable salad of bitter arugula, balanced by silky slices of nearly translucent prosciutto and salty shavings of Pecorino Romano.

In the barbecue pantheon, there hasn’t been much mention of “Iowa” style baby back ribs, but Spark served just that. The half rack of Slowly Cooked “Iowa” Baby Back Ribs was certainly tender, cooked low and slow, with a thick coating of “special” BBQ sauce. The six ribs didn’t have much depth of flavor, either in the meat or in the overly sweet sauce. The sides were excellent. We were treated to perfect al dente green beans, which supported shreds of caramelized onions and crushed hazelnuts. Spark intended for the ribs to come with mashed potatoes, but we already ordered potatoes with our other entrée. At no extra cost, we were able to substitute broccolini, simply steamed, then seasoned with extra virgin olive oil and shaved parmigiano.

The rosy orange-pink filet of Atlantic Salmon arrived mesquite-grilled, with a nice char, smoky flavor, and crispy skin on the bottom. The flaky fish was slightly dry, which was easily remedied with a dip in the metal dish of tangy green tarragon sauce. The fish came with a pile of “crusted” vegetables: onion strands and small cuts of carrot and zucchini that were dredged in flour and fried until slightly crispy. The flavor was mild, and the presentation was similar to an Outback Steakhouse Bloomin’ Onion. The plate also featured a mound of buttery potatoes, strewn with diced chives.

For dessert, the house-baked Apple Walnut Cobbler was a best-in-class dessert. The cobbler was served warm, so the accompanying scoop of vanilla gelato melted over the crumbly brown sugar crust. The tan crumble was dusted with confectioner’s sugar, plumed with mint and contained big firm chunks of cinnamon-soaked apple.

No single dish stood out as staggeringly good, but almost every bite was consistently flavorful. Given the cost of the meal and the clear quality of the ingredients, Spark is undoubtedly a good value. It’s understandable why Spark has cultivated a regular following, and why the single location has become a three-link chain. 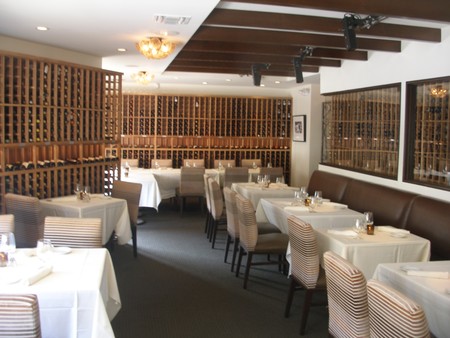 Is there any way to acquire gift cards for friends in LA if I do not live there?
No. They currently need to be purchased in person.

served with choices of Spark fries or sweet potato fries

served with choices of Spark fries or sweet potato fries. Add to your burger: avocado $2 or applewood bacon $2

Our pizza is made in our wood-fire oven in the traditional Roman style with a light, thin crust.

We utilize Mesquite and Oak wood for the roasting of all our classic dishes. All chicken served is natural and hormone free. Woodfire Rotisserie cooking may impart a rose color to white meats.

We utilize Mesquite and Oak wood for the roasting of all our classic dishes. All chicken served is natural and hormone free. Woodfire Rotisserie cooking may impart a rose color to white meats. Our steaks are hand-cut from USDA Midwestern, corn-fed Prime and Certified Angus Beef that has been aged a minimum of 28 days for optimum flavor and texture.