In a city where restaurants vie for celebrity patronage and flashy presentations sometimes precede flavor, The Palm Steakhouse in West Hollywood remains the unpretentious favorite of locals and celebrities alike. Since its opening in 1975, The Palm has been garnering a crowd of devoted followers with its simple, stunning presentations of high quality meat, seafood, and favorite Italian classics, like Veal Scallopine and Linguini with Clam Sauce. Its lively atmosphere, generous portions, and highly attentive service make The Palm an ideal destination for a special occasion dinner, even as the relaxed bar scene invites old friends to re-connect over a great glass of wine.

A Taste of the Old World in West Hollywood

In an era when steakhouses have become the playgrounds of celebrity chefs, The Palm Restaurant in West Hollywood manages to retain some of that classic and elusive old world charm. Since the very beginning, when it was merely the in-home cookery of two Italian immigrants, The Palm has grown into a powerhouse among steakhouses, spanning the nation from New York City to Chicago and Los Angeles. Although it now includes over twenty-five locations nationwide, each of which feature the same menu, The Palm deftly avoids the clichés and affectations of modern steakhouses by continuing to specialize in beloved Italian-American classics and good, dry aged beef. Squarely situated along a string of small, trendy bars and cafes, the West Hollywood location joined The Palm family in 1975 and quickly evolved into something of a landmark. With celebrity illustrations, signatures, and photos adorning the walls of the restaurant, caricatures of legends ranging from Steven Spielberg to Richard Simmons and Alice Cooper have become nearly as much of an attraction as the food.

From the outside, the Palm is relatively nondescript, with a green and white façade and only a small sign donning the signature palm tree to announce its presence. Inside, the walls are dark wood paneling and lined with matching wood booths that include dark green leather seats. To the left of the entry, a large television hangs over a polished wood bar where patrons can chat amicably among one another, and this is exactly what they did as we arrived, and continued to do as we left a few hours later.

We were greeted quite warmly by The Palm’s staff and led to a quaint table for two at the far end of the restaurant. The restaurant offers booths as well as round tables, all tastefully topped with uncomplicated white linens. Though there was no music playing, the room hummed with conversation and the lights were dim over tables populated by content diners. Our server, Alessandro, greeted us within seconds with his charming Italian accent. After a quick hello, we were brought a basket containing large slices of sourdough bread and a few pieces of dense, sweet panettone. Two glasses of deep, complex Malbec were poured into our beautiful stemware as we glanced over our menus.

The Palm’s menu is divided into several small parts: appetizer, salads, vegetable and potatoes, house specialties, Italian specialties like Chicken Parmesan, selections of fish and, of course, high-quality beef and chops. In addition, there is ever-changing seasonal menu highlighting the freshest local ingredients of each season.

Executive Chef Brent Jaegar shops at local farmers markets and uses local purveyors for his specials, and based on Alessandro’s recommendation, we began our meal with one of these: Steamed West Coast Mussels. They arrive already split into two shallow bowls, and swimming in a pale yellow beurre blanc. The mussels are tender and the beurre blanc is light enough not to overwhelm the true flavor of the mussels.  The dish was simply garnished with fresh thyme and micro greens. As a result of this simplicity, the flavors remained clean and were just enough to highlight the shellfish.

Some time before our mussels arrived, Alessandro brought out the raw version of our New York Strip Steak in order for us to inspect the firm texture, fine marbling, and dark coloring that is the result of The Palm’s rigorous aging process. Steaks are aged by The Palm’s own national meat wholesale company, which specializes in high-quality, Midwestern, corn-fed beef. When the cooked version of our steak arrived, the simplicity of the presentation astonished us- just the twelve ounce steak, alone and centered on a large round plate, dotted only by finely chopped parsley. It was a subtle statement about the quality of the beef.

When we cut into the strip steak, we were delighted to see that it was evenly cooked, with a rich, crispy brown crust on the outside, and possessed the essential transition from pink to red on the inside. Aside from melting in our mouth, our steak was full of character, tender but still retaining enough texture to let us linger over the time-developed flavor.

For our other entrée, we selected The Palm’s Three Pound Lobster, a behemoth of a crustacean, steamed, cut in half and then lightly charred under the broiler before being served on a large silver platter accompanied by lemon wedges and melted sweet butter. The lobster, too, was simple but well-done, lacking a flashy presentation that might distract from the beautifully sweet meat.

To accompany the selections of fish and meat, The Palm offers a variety of vegetable and potato side dishes from which we ordered one of the seasonal specials, a side of sautéed corn. A generous portion of corn arrived on a small, oblong dish accompanying our steak. The combination of lightly charred sweet corn, generous cubes of fatty, crisp pancetta, meltingly soft cipollini onions, roasted garlic, and parsley was truly outstanding. It was a delicious, colorful and complex contrast to the simplicity of our steak and lobster.

The Palm offers guests a dessert tray from which to choose. In this way, guests are deviously tempted not just by descriptions, but by the sight of rustic Italian tiramisu or a colorful bowl of fresh berries. We entrusted Alessandro, who had not yet led us astray, with our dessert choice and we were presented with the Cheesecake.  Alessandro brought it to our table and set it down with the quick comment that he had garnished it, “as if it were for myself,” with a pile of berries and a spritz of Chantilly cream. The tall triangle of creamy cheesecake is topped with a layer of sweetened sour cream and lined with a thick graham cracker crust on the edges and bottom. In line with the rest of our meal, this cheesecake is the real thing, sourced directly from a company in New Jersey that specializes in New York cheesecakes. We also indulged in a cup of espresso which was small and strong, and proved to be a nice end to our meal, served in true Italian style with a sliver of lemon peel to twist and toss into the cup.

By the end of our meal, we felt sure we had figured out why so many people, including celebrities, love The Palm. It isn’t because it is a trendy, overpriced steakhouse or not even because the service is outstanding and devoted. It’s because The Palm has character and it has class.  It stays true to the original ideals of excellent food in an elegant yet approachable atmosphere, and doesn’t pretend to be something else. It is unpretentious, fun and lively. The dishes are simple, classy, and extremely well-executed. If you’re looking for a classic place to celebrate a special occasion, or even just to relax with friends over a great glass of wine and a steak, you’ve found it at The Palm. 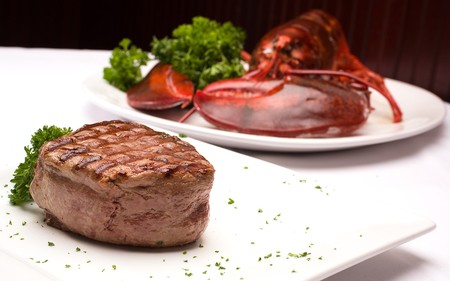 Will I see anyone famous?
The Palm Steakhouse is ideally situated in the heart of West Hollywood, a hotspot for celebrity guests. Even on quiet days, though, you may dine in the company of the Palm’s iconic caricatures of famous patrons.
Is this a new restaurant?
No, The Palm West Hollywood opened in 1975.
Do you serve lobster?
Yes. In addition to a number of seafood dishes on the menu, the Jumbo Nova Scotia 3lb Lobster specialty is a favorite.
Where do you get your steaks from?
The Palm runs its own meat wholesale company so the restaurant can ensure the quality of its steaks.

All sandwiches are served with French Fries

Broiled Jumbo Nova Scotia Lobster (3 pounds) 0.00
4 pounds, pounds and larger are also available. Ask your server for details.***Add a half lobster to any order from the Steaks & Chops menu at half the whole lobster price.***

All of our sides are served family-Style for two or more. Individual portions are available for $7.90

Broiled Jumbo Nova Scotia Lobster (3 pounds) 0.00
4 pounds, 5 pounds and larger are also available. Ask your server for details.***Add a half lobster to any order from our Steaks and Chops menu at half the whole lobster price.***

The Palm is committed to the sustainability of our seafood for future generations. The season’s premium catches arrive daily, within hours of leaving the sea and may be ordered broiled, blackened, sautéed or peppercorn crusted.

All of our sides are served Family-Style for two or more. Individual portions are available for $7.90