Family owned since 1948, Yamashiro is one Los Angeles landmark that continues to be both relevant and even cutting edge, while remaining true to its rich heritage. This restaurant and event venue not only serves up some of the most breathtaking views in the city, but it also draws in the crowds with its Asian inspired menu – dishes like the aromatic Truffle Hamachi and the decadent Wagyu Steak on a Himalayan Salt Plate prove that there is nothing conventional about their classic specialties. Yamashiro also boasts a Koi pond, which is surrounded by manicured gardens that also serve as fitting backdrops to wedding ceremonies and other special events. The chic dining room is worth visiting year-round, and the new Pagoda Bar is the latest summer destination.

A landmark restaurant set on the eastern edge of the Hollywood Hills, Yamashiro is renowned for its spectacular views over Los Angeles. The structure dates back to 1914, when the wealthy Bernheimer brothers commissioned the construction of a suitable showcase for their extensive collection of Asian treasures. The resultant building is a replica of a palace in the Yamashiro mountains near Kyoto, Japan. Most of the original art collection was auctioned off in 1922 following the death of one of the brothers, but the building itself grew in importance, beginning in the “roaring twenties” when it became the host of the exclusive 400 Club, whose members included prominent personalities in the film industry. It’s no surprise that such a charismatic building has been used in many movies over more than five decades, among them Marlon Brando’s The Teahouse Of The August Moon (1956) and, more recently, 2005’s Memoirs of a Geisha.

At the beginning of World War II, the building was clad in board and paint to disguise it from people who might want to damage such a conspicuous reminder of Japan, and used as a military school for boys. When the war was over, the property was purchased by a builder, who added a second story and carved it up into 15 apartments. In 1948 Thomas O. Glover bought what was, by then, a fairly dilapidated structure, intending to flatten everything and redevelop the site. Just in time, he discovered the ornate woodwork and silk wallpaper hidden under layers of paint, and realized the building was too important to demolish. The ensuing restoration took 20 years and resulted in the sublime structure we see today. Yamashiro became a restaurant in the 1960s, but continues to benefit from ongoing improvements to the building and grounds.

Day or night, the views are incredible, although the nighttime ones are more romantic (if you arrive at dusk you get the best of both worlds). But while the setting is undeniably a huge draw, the food shouldn’t be overlooked. Executive Chef Jason Park and Chef de Cuisine Brock Kleweno have devised a well-considered (and award-winning) menu of CalAsian cuisine that, if our recent visit is anything to go by, outshines other supposed five-star restaurants in the city. From start to finish, our evening was a treat.

Yamashiro offers several distinct dining areas: the bar to the right of the reception (where you can have just a drink, if you prefer); the dining room to the left (in fact a labyrinth of rooms stretching around the front and side of the building); and the interior courtyard, with its Christmas lights, landscaped gardens, and stone pools, where the décor is beautiful but the views missing. Each space has its own particular ambience but all evoke a sense of opulent calm, a rare treat in hectic LA. The overall atmosphere is wonderfully intimate, and although there’s a lot of background noise from other diners, somehow it enhances the experience without being overwhelming – you can still carry on a normal conversation. There is music – piped into the restaurant, and live from a DJ in the bar area most Fridays and Saturdays – but it's not intrusive.

Yamashiro appeals to all kinds of diners – small groups of friends, large parties celebrating special occasions, Japanese tourists, businessmen doing deals, and couples on romantic nights out. After all, who can resist spending the evening in good company, with Los Angeles laid out like a shimmering carpet below? Even if your table doesn’t face out directly over the city, there are lovely vistas from the side tables, and you can spend a few minutes before and after your meal contemplating them, perhaps taking a walk along the paths through the landscaped gardens. Be sure to look for the 600-year-old pagoda, brought over from Japan by the Bernheimers and said to be the oldest building in California.

Not surprisingly, the restaurant’s stunning function rooms, which can accommodate between 30 and 1,000 people, are popular for weddings, corporate events, and galas. And if the question of what to wear to such a place poses a dilemma, take heart: you can dress up to the nines or come in casual clothing – this is a place to see not be seen.

For our visit, we had to change the booking at very short notice, but they managed to accommodate us, despite the restaurant being busy. We were seated in the main restaurant, at a table with partial city views. Our server, Tricia, was ultra-friendly, and had great suggestions for wines by the glass and non-alcoholic cocktails (we chose a potent blended Margarita, a smooth Carmel Road Chardonnay, and a Virgin Mai Tai). In hindsight, we’re glad we'd ordered quickly; if we’d opened the extensive drinks list it would have taken us hours to decide from among the huge array of beverages, which include California wines, hot sakes, chilled sakes, bottled and draft beers, plus various elixir tonics and teas. And that's before you get to the cocktail menu, which features no less than nine varieties of Martini.

The food menu is likewise vast, encompassing sushi, sashimi, sushi rolls (aka “Yama's Rockin' Rolls”), soups, salads, steaks, fish, and more. Vegetarians will have a hard time here (though there is at least one meat-free salad and entrée), while fish and sushi lovers will be in their element. And how about these for the ultimate in surf ‘n’ turf: Cracked Pepper Filet Mignon and Australian Lobster Tail, or Wagyu ‘Kobe’ Ribeye and Grilled Prawns?

Our appetizers arrived quickly, and in generous sizes. Yamashiro Crispy Chicken comprised four thick strips of meat coated in what looked like Rice Krispies resting on a pile of succulent apple-cabbage coleslaw in a mustard-tinged dressing. Scattered over the top were 'crispy potato ribbons,' which were more like warm chips. Delicious as it was, we chose not to finish the dish in case we couldn’t manage the entrées.

Our second appetizer was straightforward yellowtail, tuna, and unagi (freshwater eel) sushi, two pieces of each, served simply with hot wasabi and thinly sliced ginger. Delicious and impeccable. If you like sushi but have a hard time deciding which type to choose, note that Yamashiro offers a variety of sushi platters to spare you the agony.

It was a good 15 minutes before our entrées were served – understandable, as the dining room was busy, and we were grateful for the breathing space anyway. The Sweet and Spicy Shrimp was stunning, the five crustaceans coated delicately in a sauce that struck the right balance between the two flavors, accompanied by sticky rice in a cake form and small chunks of pan-fried bok choy and scallions that added a splash of color.

Our second entrée was Chipotle-Citrus Lamb Chops – five small cutlets with a hint of heat, the edges char-grilled to perfection, the middle mouthwateringly juicy. The accompanying wild rice with pieces of palm hearts, cucumber, and cherry tomatoes was competently cooked, if less than thrilling.

The third dish, Sesame-Crusted Ahi Tuna, was another tour de force – four huge chunks of perfectly seared fish, served with two wedges of yuzu-chili potato gratin, an Asian take on the French gratin dauphinois. The sautéed maitake mushrooms and tomatoes that came as part of the dish were too pretty to eat (almost).

When we had sat down to dinner, we had commented on how difficult it is to eat a three-course meal in most restaurants in this country; however, when it came to the crunch, we found it impossible to resist going the whole hog. Yamashiro’s desserts, courtesy of pastry chef Alejandro Andrade, are dainty but hearty. The Warm Chocolate Soufflé Cake with Hot Fudge Sauce, while – contrary to its description – wasn’t served warm, took precisely three seconds to scoff. The cake was slightly crunchy on the outside, the chocolate not too dark or sugary – in short, it satisfied our craving for something sweet without being sickly.

Our second dessert, Strawberry Preserve Filled Donuts, was devoured in record time too. The donuts weren't particularly light or fluffy, but were freshly cooked. The accompanying 'dip' of crème anglaise was actually a small bowlful – way more than was necessary for the donuts, but we weren’t complaining.

To sum up, Yamashiro is an outstanding restaurant where the talent in the kitchen more than matches the location. Everything we tried – even the lattes – was excellent, and, although you leave with your wallet noticeably lighter than when you came (we paid around $75 per person including service, for two and a half courses and one drink each), I reckon it's worth every cent. For a special occasion or just a 'what-the-heck' moment, a visit to this restaurant is justified. In fact, the only downside we can think of is that the restrooms are located downstairs, so plan your beverage consumption accordingly! 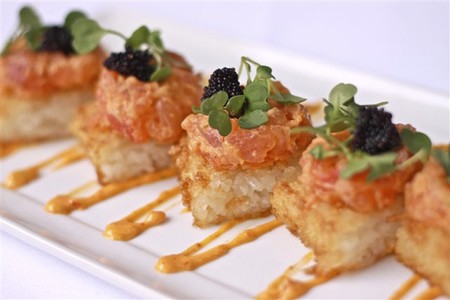 What is movie night?
Every Wednesday night at 8pm, Yamashiro presents a different movie in the garden area, shown on a HD projector and accompanied by cocktails and a full service menu.
Does the restaurant have a view?
Yes, the restaurant is perched on top of a hill and there is a spectacular view of downtown L.A., Hollywood, Beverly Hills and sometimes even the beaches.
What is the Darth Vader?
The Darth Vader is one of the Yamashiro Makizushi Rolls, made with spicy tuna, tobiko, cucumber, avocado, black rice, and spicy mayo.
Do you have valet parking?
Yes, Yamashiro offers valet parking accommodations for $8.00.
Do you host private parties?
Yes, parties of 30-300 guests can be held in the Garden and Skyview Room. The entire restaurant may be used to accommodate parties up to 1,000 guests. Customized dining options can be arranged.
What is the dress code for this restaurant?
The dress code is business casual, meaning shorts, t-shirts, beach and athletic wear will not be permitted, and collared shirts are required for gentlemen.
What forms of payment are accepted?
Yamashiro accepts all forms of payment.
Does this restaurant serve sake?
Yes, in fact, Yamashiro has a sake menu with several different options.
Will be in area Oct. 2 - Oct.4. Considering cock tails and/or dinner. Does bar require reservation?
The bar does not require a reservation.

Add Elixir-G ginger syrup to your favorite beer for $1.00

Once Upon a Tea 6.00
boldly based in rooibos with mellow notes of vanilla, the rich texture of chocolate & the defining essence of mint all blend together deliciously ever after
Myrtle Masala 6.00
warm & lemony with the adventure of spice

Add Elixir-G ginger syrup to your favorite beer for $1.00

Once Upon A Tea 6.00
boldly based in rooibos with mellow notes of vanilla, the rich texture of chocolate & the defining essence of mint~all blend together deliciously ever after
Myrtle Masala 6.00
warm & lemony with the adventure of spice