Alma de Cuba is a Latin vacation, right in the heart of Philadelphia. Located at 1623 Walnut Street, it’s a perfect destination to pop into on the way home from work or for an elegant dinner. The lounge evokes sultry Miami nightlife with a mix of traditional Cuban and contemporary elements, with traditional drinks such as Caipirinhas and Classic Mojitos, which are always specially priced for happy hour. Upstairs, the balcony-style seating and classic décor promise a mellow and sophisticated ambiance. Chef Rodriguez adds novel twists to old world Cuban standards in his "Nuevo Latino" creations, such as Pan Roasted Muscovy Duck, Lobster Sancocho, and Lechon Asado.

A Taste of Miami on Walnut

If you’re strolling down Walnut Street, you might almost miss Alma de Cuba’s modest and unassuming entrance. The white door is heavy, but once you’re inside, a few winding steps lead you to an entirely different world. At the hostess stand you’ll have a decision to make: do I stay on the first level with its lounge-style, ‘hip-urban’ setting, or climb the stairs for more elegant dining? If it’s happy hour (5:00 -7:00 p.m. weekdays), start downstairs and make yourself comfortable on one of the room’s sleek, white couches. You don’t have to be hip or urban; patrons here come in all ages, sizes, and styles. Animated conversation and laughter, however, come standard.

The lower level is a combination bar and lounge area. It’s modern and chic and plays a mix of old-world Cuban music and contemporary beats. Walk over the Cuban floor tiles and you’ll be transported somewhere between Miami’s Little Havana and South Beach. The lounge’s whitewashed walls have black & white photos projected on to them, affording a glimpse of authentic Cuba. There’s also a wrought iron bar and a glass wall inlaid with the skeleton-like remnants of massive tobacco leaves, which can only reference a hand-rolled Cuban cigar. Flickering red candles add to the ambiance and emit a sultry glow that beckons you to salsa in the isle to the sounds of Celia Cruz—go ahead, it’s dark and no one’s watching.

The bartender mixes a darn good Black Cherry Caipiroska, so sit back, relax, and take in the milieu. If you missed the complimentary Happy Hour tapas, try pairing your Classic Mojito with the Royal Palm Dates appetizer. The dish is made with almond-stuffed dates that are wrapped in bacon and then served with blue cheese. These sweet & savory, slightly sticky morsels melt in your mouth with an almost guilty pleasure!

If you can tear yourself away from the attractive thirty-somethings at the bar, climbing the steps to one of the restaurant’s two other levels promises a more mellow and sophisticated ambiance. The level above the lounge is the main dining area, which looks out over Walnut Street through three large windows. This mezzanine level has vaulted ceilings, creating an effect similar to open-air dining. The next level up mimics an outdoor balcony and has limited dining space. Around the corner, at the top of the stairs is a dining area that is mostly reserved for private parties. This is the room with the vivid tobacco field photos featured on the restaurant’s website.

Alma de Cuba is the creation of famed restaurateur Stephen Starr and Chef Douglas Rodriguez. With Starr’s vision and Rodriguez’s background and passion for food, it is no surprise their joint venture is spectacular from décor to menu.

There’s no mistaking Chef  Rodriguez’s talent, nor his multi-influenced culinary background. The son of Cuban immigrants, Rodriguez grew up cooking in Miami and later found great fame and success in the posh streets of Manhattan. The influences of these cities are reflected in every dish, and their collaboration is a style that Rodriguez refers to as “Nuevo-Latino.”  Having a chef that can blend heavily authentic flavors and manipulate them with twists of ‘haute’ cuisine is nothing less than you’d expect of Stephen Starr. No need to look up Chef Rodriguez’s many awards either; the food speaks for itself.

I decide to start with two side dishes as appetizers: The Fried Sweet Plantains and Yuca Fries with Mojo. These two side dishes are staples in most of Latin America and are a central part of Cuban Cuisine. Just one bite of the Fried Sweet Plantains is all it takes to bring me back to Miami’s Calle Ocho. The ripened plantains, which are laden with natural sugar, have been sliced and pan-fried, so the sugar caramelizes on the outside. They taste just like the maduros, as they are called, in Miami, although they are cut in smaller pieces, making them easier to share.

The Yuca fries are cut thick, boiled, and fried until crispy. Because yucca—the starchy root of the Cassava plant, which grows in arid environments, like Central and South America—tends to be a bit bland, they are tossed with mojo sauce to add more flavor. Both of these sides are incredibly good, and served in heaping portions.

Next to arrive on the table is the Pan Roasted Muscovy Duck. Like the other dishes, the duck is served on an elegant white plate. It sits sumptuously atop a watercress salad and is served with a creamy corn humita. The duck is flavorful and perfectly tender. The layer of fat that gives the meat most of its flavor has been left on for the braising but pulls off easily. Next to the duck is a small, cauldron-like bowl that holds the fresh corn humita. Alma de Cuba’s version incorporates actual pieces of duck leg that have been guava braised and are succulent and savory. The flavors and textures of this dish come together perfectly, so that all of the meat melts in your mouth, while the corn humita and the watercress salad add structure and texture to the dish.

The Lobster Sancocho with shrimp, bay scallops, and banana-curry rice is exemplary of Chef Rodriguez’s ‘Nuevo-Latino’ flair and fusion. The lobster is a vibrant red and meaty tail that is pre-split down the center for the guest’s convenience. The sancocho as our waitress explained, is the coconut broth that surrounds the tail. It has light flavors of vanilla and coconut, and you can taste the habeñero. The broth lightens the dish and highlights the delicately sweet flavors of the lobster meat while giving it just the right amount of spice!  The banana-curry rice is in a bowl to the side of the lobster. You can actually hear it sizzling as the mix of aromas waft up and cause your mouth to water! The assortment of shrimp and bay scallops is generous, and they are tasty, but be sure to ration the lobster meat for your first and last bites!

If you’re perusing the menu for something a little bit more traditional, go with an entrée like the Lechon Asado. This tantalizing roasted pork option is a thick serving of meat, marinated and roasted with the skin on until the outside is crispy and the inside is tender and juicy—just like they do it in the homes in Cuba. At Alma de Cuba, the pork is marinated with a kumquat-yuzo sauce (a slightly sweet mixture like orange and soy sauce). Congri, a Spanish beans and rice mixture, and the standard helping of sweet plantains are served to the side. I paired this dish with fruit-forward Pinot Noir from Chile, which brought out all of the best flavors in the dish.

The wine list at Alma de Cuba is pleasantly surprising, incorporating selections from Spain, the USA, Chile, Argentina and more. It is set in plots of popular regions and varietals, making it easy to navigate for amateur and connoisseur alike.  There is a lot to choose from, and pricing contrasts the menu by keeping the wines affordable. The majority of bottles range between $35 and $68, with more elite selections, for example wines from the Priorat and stellar vintages of Tempranillo, available for upwards of $125.

There are droves of good things coming from the kitchen of Alma de Cuba, but remember to save room for dessert. The Chocolate Cigar is made of almond cake wrapped with chocolate mousse and served with dulce de leche ice cream, which some diners find to be an aphrodisiac.  I found the Warm Guava and Cheese Pastelles to be equally as invigorating. Although the pastelles sound heavy, they are actually one of the lighter options on the dessert menu. The guava and creamy cheese mixture is folded into puff pastry, with the dulce de leche ice cream placed neatly to the side. This dessert should not be shared. It’s very important that every fruity, flaky, rich and creamy component be combined and enjoyed selfishly!  If your belt already seems to be fitting too tightly, there’s always room for a Cafe Cubano or an after dinner ‘sipping’ rum.

When you’re all finished, it may take you a few minutes to vacate your chairs, as your dining experience comes to an end. Lethargy takes over after such a long and languorous meal –or was that the effect of the caiperhinas? Don’t worry, the knowledgeable and attentive staff will be sure to sober you up with the bill. Dinner at Alma de Cuba is exhilarating, but it is not a cheap thrill!

Insider Tip: Although there is no valet, you can take advantage of a small discount from Park America, located on 17th and Chancellor Street. Just be sure to remember your validation from the restaurant. 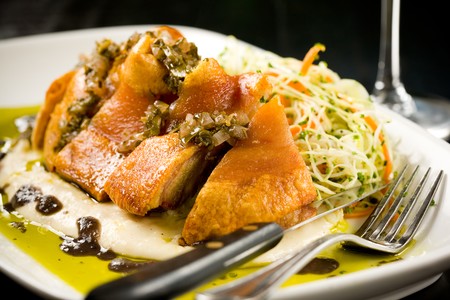 Does Alma de Cuba offer a happy hour?
Alma de Cuba offers happy hour specials Sunday- Friday from 5pm-7pm. Enjoy specially priced cocktails and tapas in the lounge.
Do you offer free tapas?
Yes, during happy hours
What type of cuisine do you serve?
Cuban cuisine is offered at Alma de Cuba.
Is Alma de Cuba part of the Starr Restaurant group?
Yes. Alma de Cuba is part of the Starr Restaurant group, along with many other great restaurant
Is valet parking available?
No, valet parking is no longer available. However, parking can be validated for discount pricing at Park America located on 17th St & Chancellor St. There are also other private lots in the area and limited street parking.

20% gratuity will be added to parties of six of more