Located inside the posh Barclay residence on Rittenhouse Square, Barclay Prime is Philadelphia restaurateur Stephen Starr’s steakhouse concept. The upscale steakhouse is both classic and contemporary: while its walls are lined with old-fashioned bookshelves, its chairs are utterly modern, designed in bright green and white leather. The same goes for its menu, where executive chef Jeffery Froehler offers traditional signature steaks like dry aged rib eye and New York strip, alongside more creative, fun items like kobe beef sliders and tater tots. With its swanky décor, decadent menu, and first-class service, Barclay Prime is the perfect spot for that special occasion dinner.

In 2004, Philadelphia’s leading restaurateur Stephen Starr opened his 13th restaurant, a steakhouse concept called Barclay Prime. The name refers to its location, as this upscale restaurant is housed inside the Barclay residence on the posh Rittenhouse Square. Stephen Starr hired interior designer India Mahdavi, whose stylish interpretation of a steakhouse has old meeting new at this classic yet hip restaurant.

The walnut bookcases that line the dining room walls, the shiny crystal chandeliers, and the sleek marble tables are all evocative of a classic bygone era. The lime green, mod-style leather chairs and booths, however, are anything but traditional. The restaurant also contains a posh lounge area, where stately black leather chairs sit on top of a funky black-and-white checkered floor. There’s also a small bar, with maybe a half dozen stools, and a few round tables surrounded by plush forest-green armchairs. The atmosphere is sophisticated and elegant, but the warm staff makes you feel like you’re home.

Former Executive Chef James LoCascio joined Stephen Starr’s Restaurant Organization in Philadelphia in 2002. “Buy fresh, buy local” and “farm to table” sum up his culinary philosophy, as he strives to use only the freshest of local ingredients. With these ideals strongly intact after years working alongside LoCascio as a sous chef, Executive Chef Jeff Froehler now holds the reins in this kitchen, and he continues to prepare some of the finest American steakhouse cuisine in town.

Being a Starr restaurant, you can expect a gimmick somewhere, and Barclay Prime has a few up its sleeves. There’s the infamous and totally decadent $100 Kobe cheesesteak (an admitted marketing ploy which, unsurprisingly, worked), made with Kobe steak, butter poached lobster, truffles and Taleggio cheese. There’s also the presentation of knives, a formality in which a server brings the diner a selection of four steak knives to choose from. Some may find the knife-tray idea to be an unnecessary trick, but the staff emphasizes that it’s just for fun. The chandeliers, wooden bookshelves, and expensive menu would, in theory, contribute to a stuffy, formal atmosphere, but I am surprised at the level of comfort I feel when I dine here. The staff are very accommodating, with warm smiles on their faces. You can tell they enjoy working here and that they are proud of the food they serve.

Wine lovers will really appreciate Barclay Prime's 300+ bottle wine list, which is heavy on Napa reds, but also has a fair share of international wines from countries like France, Spain, Italy, Germany, and Austria.

The real star on the menu is the steak, and dining at Barclay Prime is a gustatory experience that elevates my standards for what a steakhouse should be. The kitchen has tracked down some of the best quality meats available, including the Gachot and Gachot rib eye (from the same butchers who provide for the gold standard of steakhouses, Peter Luger, in New York). My dinner companion and I are treated with delicious and warm onion rolls accompanied by a smooth, creamy white butter which whetts our appetites.

We decide to start with the signature Kobe Sliders. The 2 oz. burgers were created by Chef LoCascio as an extravagant spin-off of fast food chain White Castle’s “slyders,” or mini cheeseburgers. At Barclay Prime, they’re made with premium Kobe beef and are held together with moist and buttery house-baked brioche buns. One of the bite-sized buns contains melted gruyere cheese and caramelized onions; the other comes with a fragrant slice of heirloom tomato, sweet pickled shallots and a creamy herbed aioli. Although both are absolutely delightful, I prefer the latter for its stronger garden flavors and lighter touch.

My dinner companion orders the Lobster Bisque, which arrives in a large white bowl. When the server removes the lid, a wonderfully aromatic steam escapes and immediately seduces us. The orange liquid broth is quintessential, sensuous comfort food. The liquid soup is a flavorful blend of potatoes, onions, Madeira wine, chives and crème fraîche with large chunks of lobster knuckle meat sitting at the bottom of the bowl. Fresh and sweet, the soup is bursting with the flavors of the earth and sea.

We also try the Nueske Bacon and Scallops, which consists of pan-seared scallops wrapped in bacon and then placed on top of fried green tomatoes. The Nueske family has been selling applewood smoked meats since 1933. They say that Nueske is to bacon what Kobe is to steak, and I couldn’t agree more. The bacon is extremely rich and tasty, and wrapped around two huge scallops. The bacon-wrapped scallops are served on top of fried green tomatoes (the chef’s favorite), then the whole dish is drizzled with maple syrup (which has been aged in bourbon casks). The dish exudes a strong vanilla and corn aroma, which is truly intoxicating. The smooth texture of the scallops marries well with the saltiness of the bacon, the crunchy acidity of the tomatoes, and the sugary sweetness of the maple syrup. It’s a real knockout of an appetizer, even though it tastes more like dessert!

But the steak reigns supreme at Barclay Prime. The specialty steak on the menu tonight is the 21-day dry-aged 16 oz. NY Strip from the famed Four Story Hill Farm. With such high quality, there always comes high price, so I opt for the more wallet-friendly 12 oz. Filet instead. Before the meat arrives, the waiter comes around with the famous knife tray. He recommends the Kershaw “Shun” Japanese knife, which is apparently “built like a samurai sword” with 16 layers of metal folded over a special composite center that gives the blade a wood-grained finish. It’s basically a sharp metal knife that effortlessly cuts through my thick filet. My filet, I was told, came from the Indian Ridge provisions in Telford, Pennsylvania. It’s a lean cut of meat that had been grilled with just a dash of salt and pepper. My samurai knife easily cuts through the slightly salty charred exterior into a tender, juicy pink center.

The meat is delicious on its own, but I order two sauces and several sides to accompany it. The Béarnaise Sauce is creamy and tangy, and the Caramelized Shallot Sauce tastes like gravy with sweet onion bites to it. I also sample three sides (although I wouldn’t recommend more than one side per person!). The tater tots (the chef’s personal favorite side) are crispy cylindrical bites of carbohydrate heaven. They’re simple and classic, and just fun to eat. With ketchup on the side, it doesn’t get any better. I also try the classic steakhouse side item, the creamed spinach. It was the best I’ve ever had. Topped with ground nutmeg, the spinach is creamy, rich, and utterly addictive. But if you really want to order something decadent, the truffle whipped potatoes are the way to go. Served in a huge bowl, the potatoes are whipped with truffles and topped with truffle oil. You can still see the black truffle specks embedded in the creamy, smooth potatoes.

We also want to try a non-steak entrée on the menu, so our server recommends the Alaskan Halibut. Now, when Barclay Prime says Alaskan halibut, they really mean it. The line-caught halibut was brought in by local fishermen in Alaska and shipped overnight to the restaurant mere hours later. The delicate white fish is herb encrusted (with basil, parsley, rosemary and panko bread crumbs) and smells wonderful. The presentation is simple and elegant: the fish sits on top of large slices of yellow and red heirloom tomatoes, all drizzled with extra virgin olive oil and reduced balsamic. The white meat is flaky but firm, and tastes rather sweet thanks to the balsamic and herb crust.

After our epic-sized, Thanksgiving-like meal, we can hardly stomach dessert but we just can't pass on the delightfully eccentric dessert menu. Pastry chef Frank Urso’s sweets menu is playful and creative, which is rather surprising for such an upscale restaurant. Choices include a warm deep dish cookie, a candy bar, and toasted peanut butter s’mores, but we opt for two of the more conservative selections: the chocolate caramel lava cake and the banana cream.

The Chocolate Caramel Lava Cake is a very interesting take on the traditional molten chocolate cake. The presentation of the dessert is so beautiful and well crafted that you hesitate to dip your spoon into it. But once you do, the warm milk chocolate oozes out of the cake’s center and mingles with the bourbon ice cream. What’s really remarkable is the cake’s sticky, cashew and walnut crust. The crunchy crust is almost reminiscent of a baklava (a rich and highly sweet middle eastern pastry).

Even better is the Banana Cream. It's one of the freshest, most flavorful desserts I've had in a long time. Consisting of filo dough wrapped around banana cream and banana ice cream, the dessert is topped with coconut shavings and accompanied by caramelized bananas on the side. An homage to the sweet yellow fruit, the banana cream’s medley of flavors will surely haunt me for days.

Stephen Starr’s Barclay Prime is ultimately a steakhouse for the special occasion dinner, minus the stuffy attitude that usually comes with the price tag. A mix of formal and fun, Barclay Prime offers a breath of fresh air to the classic steakhouse theme.

Insider Tip: In addition to the main dining room, Barclay Prime can offer private dining options with space for up to fifty seated diners. But, be sure to book your private party well in advance because reservations are hard to come by on short notice. 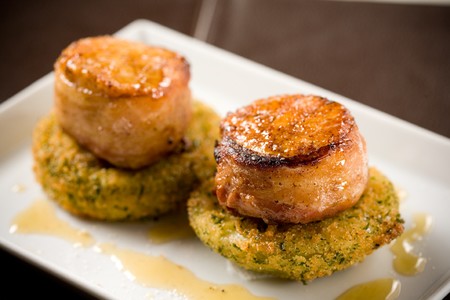 Where exactly is Barclay Prime located?
Barclay Prime is located on the 1st floor of the historic Barclay Building on the southeast corner of Rittenhouse Square.
Are custom menus offered for private parties?
Yes, custom menus are available for parties up to 40 guests.
What credit cards do you accept?
The restaurant accepts American Express, MasterCard and Visa.
Do you accept walk-ins?
Yes, walk-ins are always welcome.
Do you have valet parking?
Yes, valet parking is available at 18th & Locust Streets. The cost is $26/car and $30/SUV's.
Is there a dress code? Are jeans ok?
The dress code is business casual; jeans are fine as long as they're not ripped or torn.