Before Patou came to Old City with its ultra-hip appeal, Patrice Rames already had a Philadelphia success nestled atop the Marketplace Design Center in Center City. Since 1987, Patou’s sister restaurant Bistro St. Tropez has been serving Philadelphia foodies the finest of French food, and has given five-star French spots some stiff competition. In Bistro St. Tropez you will find the illusion of Provence amidst simple elegance, classic French cuisine, and a predominately French wine selection—all presented with Rames’s signature classic style that gives Philly a true taste of France.

The Schuylkill River may not be the Rhône, but a view of it from the cozy bistro on the fourth-floor Marketplace Design Center sends diners to France with thoughts of Provence. The simply elegant atmosphere that features large windows and breathtaking views of Philadelphia—and the fine authentic French food to boot—is Bistro St. Tropez, Head Chef/Owner Patrice Rames’s first of two successful gastronomic ventures in this city.

Twenty years ago, Chef Rames, who is himself from Provence, left Philadelphia’s Le Bec Fin to pursue his own dreams. Putting his culinary mastermind to work, he opened Bistro St. Tropez, which fast became a Philly treasure. With 20 years behind it, Bistro St. Tropez is well on its way to Philadelphia’s gastronomical history books.  Rames’s talents have allowed him to thrive amongst Philadelphia’s most acclaimed restaurateurs, even giving his old employer, Le Bec Fin’s Georges Perrier, some competition.

The thing that stands out most about this place—other than the food, of course—is how the décor blends different sorts of moods that all work into the most charming of ambiances. The hushed hallways of the otherwise-vacant Marketplace Design Center are kind of eerie on the journey up to the restaurant, but there’s something almost striking and wonderfully mysterious about them. The front room and bar are separated from the main dining room by hanging, almost-sheer, cloth separators that don’t close the rooms off and make the entire place appear flowing and large.

The main dining room is vast and dimly lit, with thick round pillars that make the place feel sort of like a banquet hall. The tables are set with an intricately elegant touch and feature fine glassware, white linens, colorful flowers, and candles that give off a seductively subdued light. Simple brushed steel chairs line the long or round tables and add a tasteful touch—simple, elegant, and classic.

The frillier aspects of the décor are offset by more wild elements—colorful splashes of light that beam from a ceiling lined with spotlights and vibrant cylinder shaped lighting fixtures, palm trees, and colorful wall paintings with French phrases scribbled on them—that keep the place from feeling too pretentious.

The walls of the front dining room and bar are lined with vast windows that open the place up and let in an inexplicable light. At dusk, when the city is beginning to light up and the sky gives off a soft blue color, the light sets a wondrous feel about the place: it seems mysterious yet also comforting. It feels as if you’re safely tucked away in this cozy, yet chic, bistro while the rest of the world trudges on. The subdued lights of the candles add to the mysteriously wonderful feel and the place is simply charming.

The fact that Rames hails from France is obvious, because the expertise to which his fare is crafted can only come from someone who was brought up loving French food.  His extensive education in French food is evident in his classic style and signature taste—an authentic and brilliant blend of flavors. Rames’s talents give Philly foodies a serious sampling of French food.

Once we get over the awe of how pretty 30th Street Station looks in the twilight, we finally sit down and begin to glance over the menu—a menu that has evolved over the years from a simple, dependable, lunch-appropriate selection (true to bistro form) to a more upscale and dinner-friendly selection for the serious foodie’s palate.

Sourdough bread accompanied by a delicious pesto sauce is placed in front of us, and we hungrily tear at it. The pesto sauce is flavored with garlic and salt, its strong and flavorsome, a much better alternative to butter or olive oil.

A bottle of red starts us off—a full-bodied French Bordeaux—along with a couple of hors d’oeuvres. We all love crab cakes, so we decide to try Rames’s version—the Gallette de Crab is perfectly textured and appropriately filling for a first course. It’s flawlessly lumpy, just the way a good crab cake should be, and I can taste an accent of shrimp mixed in with all of that creamy crab essence.

Though not everyone at the table is a fan of fungi, we decide to take a chance on some mushrooms and try the Champignons—an earthy medley of wild mushrooms afloat in a deep brown sauce, with a subtle taste of truffle from a drizzle of truffle oil.

One thing I’ve notice about Rames is that while he makes traditional French food, when it comes to his own dishes, he’s not a stickler for consistency. He likes to mix things up a little bit, a little surprise here and there—which is a good thing in a culinary culture as adventurous as Philadelphia’s. He is also a culinary genius with sauces. No matter what the dish; the sauce is always a tasty key element. And our entrees, both which prominently feature sauces, are definitely tasty.

The Porc features a grilled pork chop, slathered in a deliciously lush pork demi-glace. The tenderness of the meat and the rich texture and flavors of the sauces melt in my mouth. A side of potatoes au gratin (or potato dauphinois in French) is not dry like most of its kind; it’s a creamy soufflé-like dish with a cheesy kick. Finally, sautéed zucchini, soft but not too mushy, completes this satisfying pork dish. A glass of Provence Chardonnay, with a hint of spiced apple and vanilla, is succulent and goes well with the tender meat.

The Canard—duck breast glazed in a honey sauce—is perfectly tender and sweet all around, only to be offset by the seasonings of the red bliss smashed potatoes. The duck is paired with down-to-earth Fava beans and beets, and the combination of sweet and earthy is tasty. The dish has a fragrant, tantalizing smell.

A traditional French dessert, the Chocolate Mousse is sweet while not sickeningly sweet. The mousse is playfully seductive as it is light and airy and touches the sweet tooth just enough without being overbearing. The chocolate flavor is obvious, yet subtle enough as to not downplay the mousse’s decadent, light texture.

The Tarte aux Pomme, accompanied with the freshest tasting vanilla ice cream that I’ve ever experienced, is a great mixture of temperatures. The flaky pastry and spicy cinnamon-apple mixture are both served warm, and the chilled ice cream melts perfectly in my mouth. It’s a spiced and sweet delight, perfect for the end to an evening.

Bistro St. Tropez offers a truly wonderful French bistro-feeling: comfy but also slightly chic and glamorous. There’s a prix fixe menu available before 6:30pm, in true-to-form European fashion. The expertly crafted, authentic food combined with the charming faux-French ambiance is truly seductive, and it’s almost a guarantee that you will make this cozy little bistro tucked away on the fourth floor of the Marketplace Design Center a regular spot. 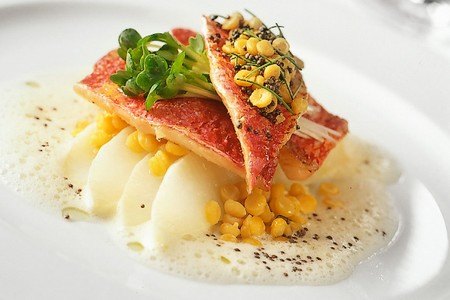