While Blue Bell Inn’s rich history shapes it to this day (Blue Bell itself was named for it), it is by no means stuck in the past. Owner/Executive Chef John Lamprecht Jr. regularly offers internationally-influenced specials (Crab Cake with Wasabi Cream) to compliment his largely classical menu. A sleek bar featuring live music and large-screen plasma televisions offers a buoyant, but refined retreat for professionals looking to unwind, and the small dining rooms’ colonial design creates an intimate atmosphere without being stuffy. Anyone looking for time-tested fine dining with modern sensibilities need look no further than Blue Bell Inn.

Blue Bell is not a hotspot by any definition. It is a relaxed area that retains the country charm of a town established in the eighteenth century, and is typified by its numerous country clubs and churches. Substance prevails over style at every turn, as Blue Bell continues to elude the hurried trappings of self-importance in favor of a pace and lifestyle reminiscent of its colonial origin. In the heart of Blue Bell stands Blue Bell Inn, which has defined the town since 1840, and continues to embody its personality today.

As one would expect from an eastern Pennsylvania restaurant that has thrived since its opening in 1743, Blue Bell Inn boasts a rich history that has over the years come to characterize it. During the Revolutionary War, the Inn housed Hessian mercenaries, supplied American troops, and graced the maps of George Washington, who was a frequent patron in 1777. By 1840, the Inn was held in such high regard by the locals that the town renamed itself from Pigeontown to Blue Bell.

The historical value of the Inn is not simply trivial, however. Owner-proprietor and Executive Chef John Lamprecht Jr. has made a conscious effort to hold on to as much of Blue Bell Inn’s storied past as prudent. The architecture, design, and menu all pointedly adhere to a simple elegance and rustic charm that has become a hallmark of the town itself.

The exterior is uniquely stark, covered by white plaster and accented only by blue shutters; little to nothing has changed since the 1700’s. Blue Bell Inn is clearly comfortable letting its significant reputation attract customers. In the quaint, flowered courtyard before the main entrance sits a great blue bell, which was used to attract illiterate customers in the eighteenth century.

The interior is a different story, however. A fully-stocked bar occupies Blue Bell Inn’s most modern wing.  It contrasts the sunny adjoined patio with dark, sleek wood and a newly-built grey stone fireplace. The dim lighting, live entertainment, and complimentary cheese and vegetable platters contribute to a jovial atmosphere that co-exists nicely with the room’s upscale appearance.

More aggressively decorated than the bar, the dining area is broken up into several smallish rooms whose décors proudly insist on celebrating the past.  My dinner guest and I were served in a room that holds about ten tables. The room is furnished with light colored wood that combines with the soft brown walls to pick up the sunset and accentuate a platoon of brightly colored colonial portraits. In bold contrast are the Inn’s trademark blue china and napkins, which add a much-appreciated playfulness to a decidedly formal setting.

Moments after we were seated, we were cheerfully greeted by our server Michael, who delivered our menus and took our drink orders. Blue Bell Inn boasts an impressive wine list consisting of both domestic and international wines. The majority of the five-page list is American, but also available are wines from France, Italy, Spain, Australia, Germany, and New Zealand. Priced by the bottle, there are myriad options from $40 and up, but the near fifty-fifty split between meat and seafood throughout the menu convinced me to play it safe with Sierra Nevada Pale Ale rather than commit to a meal best suited to a red or white. The beer selection is much less comprehensive, with only a handful of choices outside of the standard Budweiser/Coors fare.

After our drinks were served, we very carefully set about planning our meal. Blue Bell Inn’s menu contains a lengthy series of options that was expanded further by the day’s specials. The cuisine is varied without being scattershot, consisting of classic Western (New York Porterhouse Steak), European (Frogs Legs), and Eastern (Lump Crabmeat Spring Rolls) influences. We took a healthy chunk of time to decide, but Michael waited in the wings patiently without disturbing us until we were ready to order.

In the short time it took for our appetizers to arrive, my partner and I were able to relish the intimate atmosphere provided by our small room. The noise level was kept to a pleasant buzz by the room’s modest capacity, and the staff consisted only of two servers and a bus person who were unobtrusive yet attentive. We witnessed a finicky diner change her order no sooner than her entrée was placed before her, and her server politely offered to do whatever he could to ensure her satisfaction. Needless to say, the service proved first-rate.

Our first course arrived shortly, and my partner and I shared the Lump Crabmeat Spring Roll with Tamarind Dipping Sauce. Garnished simply by Bibb lettuce and a sprig of basil that highlighted the brilliant blue china, the spring roll appeared content to let its flavor do the talking. Crunchy on the outside and pillowy on the inside, it was a wonderful textural experience. The rich crabmeat was allowed to stand on its own with little distraction.  Keeping the spring roll light on the palate was the tamarind sauce, which brightened the oily dish considerably, and awoke our appetites.

Next, I indulged a guilty pleasure: French Onion Soup. While it was a risky proposition – I could have overpowered my pre-entrée salad – the gamble turned out a great success.  The soup arrived neatly deconstructed; the broth, croutons, and cheese were plated separately. This innovation proved invaluable as I was able to soak the crisp, darkly toasted croutons to my liking, while adding manageable amounts of the pearly-white gruyere. The broth itself was a translucent golden brown, and proved to be exceptionally delicate. It tasted sweetly of onions, not overly-salted beef broth. The soup provided an interesting, invigorating addition to the meal and in no way intimidated the salad course.

Before our entrées, we were each served a Blue Bell Salad of mixed greens, which were heaped upon the blue china with thick, red tomato wedges and purple-ringed radish slices. The highlight of the salad proved to be the imported bleu cheese dressing. Cool and tangy, the dressing added vibrance to an otherwise ordinary salad.

Though our appetites were rejuvenated by the bleu cheese salad, the main course was generously portioned and pleasurably difficult to finish off. I chose the Grilled Two Double Rib Lamb Chops, which came with onion rings served on sautéed potatoes, creamed spinach, mint jelly, and béarnaise sauce. Without garnish, my plate dully displayed varying shades of brown, but based on the previous dishes, I was confident (and rightfully so!) that the flavor would prove to be much more exuberant. The lamb was cooked medium-rare to perfection, and crusted with just enough spice to add a smoky, peppery accent without overshadowing the lamb. Paired with the refreshing mint jelly, the lamb took on a depth of flavor that melted in my mouth, and remained appealing throughout. Unfortunately, next to the ample cut of lamb, the sides seemed a bit of an afterthought.  The onion rings and potatoes were an awkward, starchy combination, and the creamed spinach offered little in the way of texture or flavor. All told, the obvious centerpiece of the dish was the lamb, which was cooked and seasoned flawlessly.

The decision to embark on the dessert course proved difficult for our stomachs, which were near-bursting, but all-too-easy for our taste buds, which were eager for more. The dessert menu offers a wide-array of dishes that range from light (Strawberries with Whipped Cream) to decadently rich (Chocolate Crepe with White Chocolate Ice Cream and Chocolate Sauce). My partner and I decided on the Crème Brulee, which fit somewhere in between. After tapping through the blistered, caramelized sugar crust, we unearthed the delightfully creamy custard. It proved to be the perfect finale to a meal that offered many well-executed contrasts in texture and flavor.

Blue Bell Inn is an establishment of great historical and cultural significance, but Lamprecht has done a fantastic job of marrying a respect of the past with a devotion to the present. I would recommend Blue Bell Inn to those appreciative of substance over style. They offer outdoor seating, a lively, upscale bar, a children’s menu, and private rooms for up to one-hundred guests.  Anyone looking for a well-executed meal with relaxed, efficient service or a quick cocktail won’t be disappointed by Blue Bell Inn. 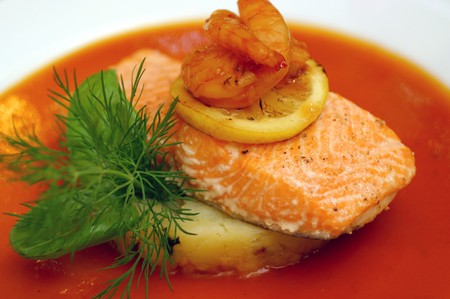