With its kitschy theme park decor and its hip Latin beats, Old City’s Cuba Libre is all about the ambiance. The elaborately designed space – with its tall palms and wrought-iron balconies – was built to resemble an outdoor café in Cuba circa 1940. The restaurant’s menu combines “Nuevo Cubano” dishes alongside traditional Cuban cuisine. From the tasty mango butter spread accompanying the bread to the juicy Guava BBQ Rib entrée, this Latin feast will be an experience all its own. The endless variety of Cuban rums and a tasty selection of mojitos, Cuba Libre’s specialty drinks, won’t disappoint either!

Located in the historic-but-trendy Old City district in Philadelphia, Cuba Libre Restaurant & Rum Bar is only a few blocks away from the Constitution Center and the city’s famed Liberty Bell. It’s also conveniently near SEPTA’s  2nd Street Station on the Market-Frankford line. If you’re driving, it can be tough to find parking in Old City, but Cuba Libre’s got you covered with valet parking after 5 p.m.

Once you step through the entrance curtain, you’ll feel like an extra on a movie set in Old Havana. The restaurant is an homage to America’s Cuban heritage and a celebration of the Cuban arts, sounds, and flavors. Co-owner Barry Gutin wanted to create a Cuban restaurant with pizzazz and a hint of theatrics, so he enlisted the help of designer Kevin Hale of Dynamic Imagineering. Hale divided the space into two stories with an enclosed courtyard, 15-foot palm trees, wrought-iron balconies, weathered windows, and retro paddle fans. The exterior façade of Cuba Libre is modeled after an old Cuban cigar factory. For the restaurant interior, Hale recreated the look of a traditional outdoor Havana café. The 50-foot skylight in the ceiling adds to the illusion that patrons are eating outdoors. The upstairs dining room – called La Galleria – features exhibits from Cuban artists. There are several seating areas: the main courtyard, the upstairs dining room and balcony bar, as well as a small outdoor terrace. You can even book the restaurant for private dinner parties or corporate receptions.

The atmosphere inside the restaurant is festive – especially on Thursday, Friday and Saturday nights when the restaurant transforms into a salsa nightclub with a DJ (You must be 21 or older to enter on those nights, between 11:30 p.m. and 2 a.m.). There’s always a crowd of stylish 30-somethings lined up outside waiting to get in on the action. The dining style is casual but elegant. A lot of Cuba Libre’s patrons are regulars who come in directly from work for a drink, but you’ll also find a steady flow of tourists and hip youngsters strutting the latest fashions.

Cuba Libre’s Executive Chef, Guillermo Pernot (born in Argentina, married to a Cuban), is credited for launching the Nuevo Latino cuisine trend in Philadelphia. Pernot has received many culinary awards, including the prestigious James Beard Award for “Best Chef of the Mid-Atlantic Region” in 2002.

Don’t feel intimidated by all the Spanish terms on his menu though: there’s a very helpful glossary page you can turn to for help. The servers at Cuba Libre are also very helpful and attentive. Don’t expect too much on a Friday or Saturday night, but overall, my experiences have been satisfactory.

The first thing you notice when you sit down at Cuba Libre is the impressive drink menu. There’s a four-page wine list, with a large selection of Latin American wines like a red Cabernet Sauvignon, Premiado, from Argentina, and a white Valle Andino from Chile. There are also plenty of bottled wines hailing from all around the globe (Spain, Chile, Argentina, Australia, and the U.S.). There’s also a specialty cocktails and rum menu. Cuba Libre serves a dozen varieties of the Mojito – Cuba Libre’s tasty but expensive specialty – as well as a huge selection of other classic and new cocktails, frozen drinks, beer and sangrias (available in half or full pitchers). You can also order one of the batidos (fruit milkshakes) with or without Cuba Libre brand rum. That’s right, Cuba Libre has its own brand of rum. And if you don’t like it, no worries, there are 60 other rums to choose from, including a 21-year old special reserve, gold rum, and fuera de prueba (overproof rum). I always order the Mojito – served in a tall opaque glass with Cuba Libre brand white rum, lime juice, hierba buena (mint leaves), freshly squeezed guarapo (sugar cane juice), and splash of club soda.

Now, on to the food. My favorite thing to eat so far at Cuba Libre is their complimentary toasted bread served with their sinfully sweet and creamy mango butter. The mango butter’s delicious ingredients include: mango puree, butter, cinnamon, and black pepper. But chef Pernot has concocted some other tasty and colorful dishes as well. The plates are all literally colorful – with patterns and designs in yellows, reds, browns and blues.

The lunch menu is significantly cheaper than the dinner menu, but of course you don’t get the same atmosphere. You still get the background salsa music, but it’s significantly less crowded. For lunch, try one of the “sandwiches calientes,” all of which are served with tropical chips, salsa and vegetable escabeche (pickled veggies, Latin-style). I’ve ordered the popular El Cubano sandwich – it’s a mighty huge sandwich consisting of shredded pieces of slow-roasted pork leg dressed with a hint of garlicky mojo sauce, a good-sized chunk of sliced ham, melted Swiss cheese, a few sliced pickles for an acidic kick, and a strong, spicy brown mustard. The bread is described as “Cuban bread,” and it’s certainly something you won’t find everywhere. The whole sandwich has a hot dog taste (the flavors that really stick out are the pork and mustard), and the bread has a doughy hot-dog-bread flavor to it as well. The dish is accompanied by sweet pickled veggies (escabeche) and dried plantain chips that are to be dipped in a spicy tomato salsa.

The tropical weekend brunch at Cuba Libre is also great, especially when the weather gets warmer and they open their little outdoor patio. I’m a sweet tooth, so I always order the waffles from their brunch menu. The waffle flavors vary weekly, but they’ve always been a real stand out for me. They’re served warm, with a medley of fresh fruit and fruit sauces and/or syrup in little white cups on the side. The waffles are also usually stuffed with fruit – last time, mine were stuffed with sweet pineapples and sauces included a passion fruit puree and syrup.

For dinner, you’ve got to try the Guava BBQ Ribs (served as an appetizer or entrée). Cuba Libre’s award-winning St. Louis-cut pork ribs are slow cooked and then glazed with a spicy/sweet guava BBQ sauce. The juicy and tender ribs are then topped with jicama-black bean relish. The ribs contain a lot of sweet and tender meat and the portion is just huge – even as an appetizer. For a more showy, “eatertainment” experience, order the Fire and Ice Ceviche, although it’s more often a miss than a hit. Cubes of tuna are mixed with coconut milk, lime juice, spicy yellow pepper and cilantro. The concoction is served in a half coconut shell which floats on top of seaweed and dry ice (which gives off that smoky effect).

Another house specialty is the Arroz con Pollo (“Rice with Chicken”), a traditional Latin American dish, consisting here of saffron rice, chicken, Spanish pork chorizo, sweet peas, roasted red peppers and El Presidente beer. The dish is served in a large earth-toned bowl and topped with cachucha pepper relish and a long, dried plantain chip. The Arroz con Pollo tastes decent enough, but as my dinner companion noted, it’s something most people can cook up at home, and there are many more unique dishes on the menu.

In addition to the regular dinner menu, there is also a daily specials menu. The night of my visit, there was a delicious poached salmon entrée that was served on top of a corn cake that was itself bathing in a creamy sauce. There are also a variety of platitos or side dishes at Cuba Libre. Try the Tostones – twice baked green plantains served with caramelized roasted garlic mojo – a real sweet and savory treat.

Finish your meal with one of Cuba Libre’s bold desserts. The dessert menu features a series of ice creams as well as some cakes and rice-based desserts like the Arroz con Leche (rice pudding with raisins and cinnamon, served with guava bar cookies) and Banana Tres Leches (a vanilla sponge cake drenched in three banana flavored milks and served with a chocolate banana mousse and caramelized bananas). I would recommend, however, the Flan de Naranja, a soft and creamy Grand Marnier-flavored flan accompanied by big chunks of toasted orange cake “croutons” and scattered orange wedges, all floating on top of a caramel-like syrup. It’s hard to stomach dessert after all the big portions at Cuba Libre, but this sweet Flan is a real stand-out. If you want to end your meal on a lighter note, sip on some authentic Cuban coffee – the perfect end to the lovely fantasy of Old Havana that Cuba Libre offers. 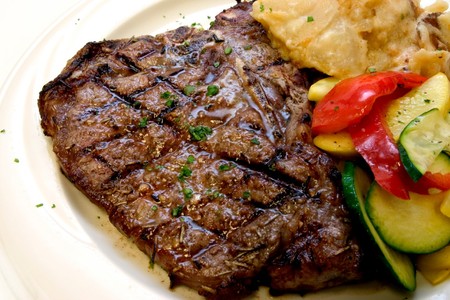