Located just south of the hustle of South Street in Queen's Village, the Famous 4th Street Deli is a quaint Jewish-American restaurant featuring hospitable service and enormous sandwiches. Named after the streets in New York City, some of the sandwiches stand over six inches tall and come with a choice of sides like potato pancakes and fresh fruit. Traditional Jewish American delicacies, including monsterous bowls of matzah ball soup, can be ordered as appetizers. The attached bakery freshly bakes a motley of pastries available for desert or take out daily.

Opened in 1923 by the Auspitz family, who owned the restaurant until 2005, the Famous Fourth Street Deli takes the traditional sandwich and makes it something bigger.  I should have assumed that the deli was famous for a reason.  Now co-owned by Bill Shapiro and Harry Willner, the Famous Fourth Street Deli features a vast menu of traditional Eastern European cuisine.  Bill Shapiro feels the Jewish Deli is the cornerstone of a community, and although sandwiches are the staple of the restaurant, Shapiro says they are talking with a featured chef in the hopes of adding a modern flair to authentic favorites.

Stepping through the doorway, our presence felt anachronistic, as we found ourselves in an antiquated entranceway of what either was a restaurant or a bakery, or maybe a juxtaposition of both. Our first task was to find out where the hostess was.  We slowly ambled by the surreptitiously placed glass cases conveniently filled with jaw-dropping pastries between the restaurant proper and the entrance.

Walking through the connected bakery, we found ourselves in the main dining area where a waitress beckoned “how many?” from across the floor and then, smiling, showed us to a table overlooking Bainbridge Street.  As we waited for our server to come with the menus, I looked out of the windows for a perfect view of the downtown skyline, just preparing to light up for the evening.

Michelle, our waitress, spoke to us as if she’d known us for years, asking if I was going to “finish it” this time.  Not knowing what “it” was, I retorted, “you bet.”

The Deli boasts a typical drink selection, save for Dr. Brown’s bottled soda (a New York favorite), and it is BYOB friendly, with no corkage fee for wine.  After taking our orders, Michelle brought out the first course, an interesting appetizer that is complimentary for all guests.  Laying on a tangy bed of sauerkraut, and placed between my dinner companion and I, were two pairs of different colored pickles: two sweet and two sour.  I choose a dill pickle first, and cautiously bit off the end.  It was a bit salty, which was balanced out by the sweetness of its verdant neighbor and by the sourness of the kraut. The pickles made for good occasional bites during pauses in conversation, and the humble arrangement complemented humble atmosphere of the deli.

As we waited for our next course, we took in the atmosphere of the restaurant.  Our tables were made of a wood that resembled that of the paneling and molding of the walls, and a vintage cash register flashed its 20c flag from across the room.  The old style of the deli felt authentic and not tried and the immediate friendliness of the servers and the cooks in the open-air kitchen gave the restaurant a very homey feel common to the Queen’s Village area.

Before our sandwiches, Michelle brought out two small porcelain bowls, each with a matzo ball submerged in broth.  Although the soup was a little more than a bite-sized portion, the matzo ball was terrifically tender, and it absorbed the warm lightly salted broth perfectly.

Before we could finish our one bite of matzo, however, our sandwiches made their way to the table.  As the Flatbush Avenue sandwich was placed in front of me, my dinner companion and I stared in awe like monkeys at the base of a corned beef monolith.  For an honest few moments we rotated our eyes from the sandwich to each other and back, while taking turns measuring the sandwich and guessing its height in inches.  Michelle came around and we asked her approximately how tall my sandwich was.  She stretched out her fingers next to my dish and guessed.  Supported by two long wooden skewers down each half of the sandwich, my Flatbush Ave stood roughly six inches off the plate.  Six inches of turkey, corned beef, pastrami, cole slaw, and Russian dressing flanked by multiple slices of rye bread left me thinking, “I don’t know what to do with this.”  Suddenly, I remembered Michelle’s opening question.  No, there was no way I was going to finish this.  Ordered from the “Ungashtupt Sandwich” menu, the Flatbush Avenue was a force to be reckoned with.  I didn’t have any reference material with me, so I couldn’t have known that ungashtupt is Yiddish for “packed.”

Served with a side of delectable deep-fried potato pancakes, my sandwich was as intimidating as it was delicious.  As signed pictures of celebrities watched in glee, I attempted to dismantle my gargantuan sandwich to see if I could even master a quarter of it.  Even though the hyperbolic mounds of meat were destined to make my heart beat slower, I was pleasantly surprised by the motley tastes achieved by the compilation of the different meats and the cole slaw.  The Russian dressing kept the meat moist and my fingers messy, and the rye bread became a fresh contrast to the supernova of lunch meat.  Instead of layered together, the different meats were separated so that my first bites were of pastrami, second enjoyed the corned beef, and ended with the turkey.  Michelle came back moments later with an empty plate remarking, “you’re going to need this.”

My companion ordered the Hot Brisket of Beef on Rye off the “regular” sandwich menu, which at first was a little dry.  She remedied the problem with some Hebrew National mustard, which brought the sandwich to life.  The spiciness of the mustard met with and complemented the freshness of the rye bread, which flanked my companion’s significantly smaller sandwich.  Although there weren’t as many interesting tastes as my sandwich, the Hot Brisket of Beef was a fresh and simple dining option.  Opting for a more healthy contrast to her enormous meal, she had ordered fresh honey dew, cantaloupe, and grapes for her side.

I began to realize that for $15 a plate, I was probably going to get at least one more meal out of this dinner.  I had just finished the first half when I realized I was near capacity.  My dinner companion made it through only one quarter of hers.

Michelle brought us styrofoam containers that barely fit our leftover sandwiches, and looked at us inquisitively for a dessert order.  After the first three courses, I didn’t know how I was going to manage a dessert, but I could not resist the smells coming from the bakery just over the partition.  Michelle yelled through a cut-out in the wall to ask the bakers what flavor rugalach they had that evening.  My companion went with the apricot rugalach, while I tried a macaroon.

I should not have been surprised that the macaroon was quite larger than I expected, but even though I was at the brink of what I could consume, I had to eat every bite of it.  Soft and draped on one side by hardened milk chocolate, the macaroon was one of the best I ever had.  It parted without protest as my fork slid through it, and the coconut flakes melted as they met my tongue, which added to their noteworthy taste.  Without a doubt, it should be sampled and compared to the best.

The rugalach had a breakaway flaky crust surrounding apricot and walnuts, which balanced out the sweet of the fruit pleasantly.  Employing an interesting blend of chewy and soft, the rugalach would make a great companion for coffee after a meal or could be enjoyed on its own as a dessert snack that doesn’t come off too sweet.  Along with the macaroon, the rugalach was one of the many desserts made fresh on premises in the bakery.

Finally done, my dinner companion and I watched the sun fall just passed the skyscrapers of Center City and waited for our check.  We were thoroughly replete.

Just as we were expecting the check and a night of laying flat on our backs, Michelle came back with two complimentary chocolate chip cookies from the bakery, which cap off every guest’s meal.  I looked at her with an expression that asked if she was serious, and she nodded yes.  Oven-baked in the bakery just beyond the cutout in the partition, the cookies were soft and melted as I chewed.

Shapiro says the history of huge sandwiches comes from New York in the 20s and 30s, where competing delis would vie for customers by claiming they had the most meat packed into their sandwiches.  Although he feels it’s important to keep this tradition alive, Shapiro says his restaurant aims at making people feel comfortable to congregate.

Leaving the restaurant with my heavy sandwich-kabob, Michelle and company thanked us and bid us a goodnight.  If you’re in the mood for a cheap but savory sandwich which you can eat over a series of days, and if you’re interested in a real South Philly hospitable night out, try the Famous Fourth Street Deli—just make sure you haven’t eaten at all that day. 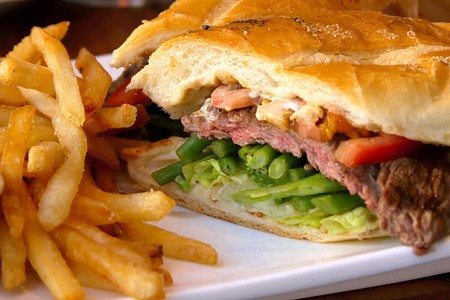 bowl of greens with toppings