Friday Saturday Sunday started on a dare and became a Center City dining establishment known best for its wine list, the Tank Bar (a second-floor bar set before a jumbo fish tank), and its cream of mushroom soup. Located near Rittenhouse Square, the restaurant features dishes including pork chops, crab cakes, duck and butternut squash ravioli. Low-lit dining rooms are cozy enough to be romantic; they are also ideal for getting together with friends for dinner and a bottle of wine. The wine list offers about 70 varieties, all sold only $10 over cost.

Friday Saturday Sunday was born from a dare between three men with little restaurant experience and a few second-hand apartment refrigerators.

In the early 1970s, entrepreneur Jay Gubin posed this challenge to Weaver Lilley, a photographer, and Arnie Roberts, an ad designer: let’s each put $2,000 into a hat and see if a restaurant appears.

The founders sought out a little financial help after they realized the $6,000 they’d chipped in at first wasn’t likely to pay the bills. They were smart (when the restaurant opened, everyone had college degrees, including the waiters and the dishwasher, who had a PhD), but they knew squat about restaurants. The staff and owners learned how to serve good food as they went along.

Today, the result of Gubin’s dare is a much-loved Center City restaurant with a menu so decadent and a wine list chosen with such care you’d never guess it began on a dare.

“This turned out to be a very difficult way to have a lot of fun,” says an article on the restaurant's web site.

The fun still shows in many of the restaurant’s best features, including a menu and wine list that include a collection of Weaver Lilley’s favorites (indicated by the occasional asterisk).

Like the owners, the restaurant’s current head chef, Reese Skulteti, also learned on the job. He started out as a construction worker, taking winter jobs washing dishes at various Allentown, Pa. restaurants when the cold weather brought layoffs. Skulteti watched and learned on the job, making his way from dishwasher to sous chef to, four years ago, head chef at Friday Saturday Sunday. There was no stop at culinary school along the way.

Friday Saturday Sunday sits just on the Center City side of Rittenhouse Square, a simple storefront that gives little warning of the artsy, loud dining room on the other side. Inside, the restaurant’s upstairs and downstairs each offer a distinct atmosphere to choose from, depending on your mood and table availability.

It’s shoulder-to-shoulder upstairs at the Tank Bar, where drinks and small plates are served at a low-lit bar in front of a jumbo fish tank. The setting is ideal for sharing baked brie and a bottle of Chablis with a friend, while marveling over the fish tank, with fish such as a black-spotted fish that looks like a Dalmatian.

The upstairs ceiling is draped in purple fabric that gives the bar, its handful of adjacent tables for two, and another seating area behind a partition a dim, fuchsia hue. The close arrangement of the dark wood tables gives an intimate feel, though not only with the people you came with. Be prepared to know the details of your neighboring table’s dinner conversation.

Downstairs, Russel, the beverage manager and host, might rub your shoulders and tell you that you look tired before leading you to your table and setting you up with dinner menus and a by-the-bottle wine list.

The first-floor dining room feels something like a big loft apartment with its tall ceilings and exposed ventilation pipes. Downstairs also has wood-paneled mirrored walls, but here, there are panels of artwork lining the walls above the mirrors, with subjects including two parakeets and the backside of a lounging, nude woman holding a glass of wine. Wood partitions separate the dining room into distinct areas, and a bar is tucked into the back corner next to the kitchen door.

The candle-lit tables and close seating might make for a romantic atmosphere, although the sound coming from the speakers is quite loud.

Though the clientele at Friday Saturday Sunday is dressed in clothing as varied as jeans, suit jackets, and granny sweaters, it’s not a bad idea to wear your evening best. With wood-framed mirrored walls at nearly every turn, you’ll be catching glimpses of yourself all night – and you don’t want to lose your appetite.

About half the seats downstairs are situated in a corner of a wall or at a partition, and most tables have room for at least one in a booth seat. The mirrored walls make the restaurant seem more crowded than it is.

The night’s specials and list of desserts can be found chalked up on big boards that are just as much a part of the décor as anything else, both upstairs and downstairs. As for the menu, it could take a while to decide from the guilty pleasures on the first course list alone.

The Grilled Chipotle Barbecue Shrimp appetizer is served on a bread plate with a crunchy salad of the Mexican root vegetable jicama. The sauce tastes like a savory key lime pie drizzled over shrimp with a subtly spicy kick, barbecued until tender on the inside with a charred crisp on the outside.

The Butternut Squash Ravioli appetizer is served warm in a rich, sage-flavored butter sauce with a sprinkling over the top of small, crunchy pumpkin seeds called pepitas. The ravioli’s warm, yeasty flavor is complimented, but not overshadowed, by the butter sauce, which also just slightly softens the crunch of the pepitas.

Take note: you may be stuffed from your appetizers, but splitting an entrée costs $3. The cooked-to-perfection Herb Grilled Double-Thick Pork Chop is plated atop a bed of mashed potatoes, all drizzled in an overpowering Roquefort cheese and garlic sauce that’s paralyzingly rich – enough of it that you can scrape some onto your fork with every bite until you’ve cleaned your plate. The dish, served in a generous portion, is a filling option for a sophisticated palate in the mood for meat and potatoes.

The Roast Country Cornish Hen with Pan Sauce, stuffed with sausage and pears, is like a miniature version of a stuffed Thanksgiving turkey. The crunch of pear is an earthy compliment to the chicken’s chewy texture.

Friday Saturday Sunday has a pastry chef who creates and prepares a list of desserts that stays mostly the same, with a few occasional changes. The Banana Bread Pudding with whiskey crème Anglais is a rich, fruity mush served in a white sauce that leaves the taste of liquor on the tongue.

While reading through the after-dinner drink offerings, a server appears and suggests we try a Prosecco Moscato sparkling wine that’s not on the menu.  Except for a few after-dinner drinks, the restaurant’s selection of about 70 wines come by the bottle – priced at only $10 over cost, as the Web site reminds potential diners.

The restaurant has its own corner in the neighborhood. It’s close to ritzy Rittenhouse Square, but not close enough to have that upscale feel that can be intimidating to those with a two-digit dinner budget. Nor is it close enough to the part of Center City where the downtown restaurants dominate, or to the Graduate Hospital neighborhood’s funky, family-run eateries. This restaurant has eked out a place of its own.

That place gives the distinct feeling that a couple of guys created a restaurant based on what they love: good food, wine, art, and bass-heavy hits from the ‘90s. Friday Saturday Sunday is a perfect night out for anyone who likes those things, too. 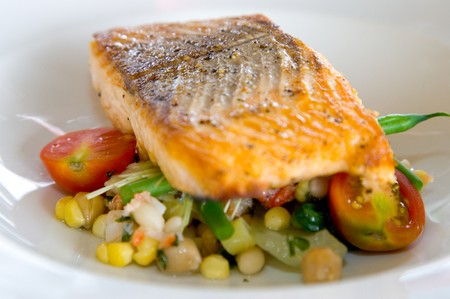