Lolita offers a friendly, casual atmosphere and sophisticated yet tasty Mexican cuisine. Try such dishes as the Puerco, a grilled spice rubbed pork chop with smoked bacon potatoes, rajas, sautéed spinach, and guajillo salsa or one of their scrumptious desserts like the Jericalla Con Calabaza, a pumpkin crème brûlée with canela clove, and pumpkin seed brittle. They also offer seasonal margaritas, but one margarita is featured year round-- the Tradicional, lemon-lime fresh squeezed margarita mix with a salted rim. Don’t miss out on some of these delectable dishes—try Lolita’s today!

Marcie Turney and Valerie Safron, a chef and her Spanish speaking waitress companion, opened Lolita in 2004 after successfully playing their hand in a small knick knack shop across the 13th street block. The two met while working at Valanni, one of the more well known Philadelphia dining establishments, where they became partners in both love and business. While that situation can sometimes go awry, this couple has certainly got the recipe for success. Now the proud owners of more than a few profitable businesses south of Chestnut Street including Open House, Grocery, Lolita, Bindi, Verde, and the new Bar Bucco, one must give credit where credit is due.

Lolita is a small space with seating for fifty tables, give or take a few outdoors for when the weather permits. The restaurant gazes out at the street through full length glass panes tattooed by elegantly scripted word Lolita, defined in the Collins English Dictionary as “a sexually precocious young girl.”

A sizeable painting of a solitary white calla lily is the first thing you’ll notice when you enter the door. The deserted flower hovers down at the restaurant's guests from its lofted seat and adds an interesting twist to the interior of the space. Exposed brick walls are sparsely decorated with a few iron framed mirrors, and square wooden tables for two and four fill the room. An open kitchen is at the rear, enveloped in a counter dressed in tiny red tiles. Red is the recurring theme of the space. It seems these girls can’t get enough of it: crimson napkins and square rouge colored plates set the tables, red brick makes up the walls, and other splashes of the heated color are scattered about. Strangely enough, our waitress dons a tight wavy— you guessed it— red ponytail.

Digging through my purse I come up with the bottle of tequila I brought along, which the smiling waitress happily pours into a towering pitcher of today’s special, the Blood Orange Margarita.  This restaurant is marketed to the public as a BYOT, the T standing for Tequila.  This small detail is what differentiates Lolita from the rest of the Philadelphia BYOBs, and if you’re not already a tequila connoisseur, you’re certain to learn something here. Most of the people in the restaurant have their own selection, from Patron to Cuervo to Margaritaville, and the pitchers are plentiful. It is important to note that this is not exclusively a BYOT restaurant, as wine and beer are also permitted. There is no additional corkage fee for bringing your own, but credit card users beware.  Be sure to stop at the ATM before making the trip, as this is a cash only establishment.

The meal begins with a low ball glass of the Blood Orange Margarita, spiked of course. The lips of the glasses we are given are delicately sprinkled with salt on one side and dressed with lime wedges on the other, a sign of the attention to detail on the part of the owners.

The menu offers five to six selections of each type: Bocaditos (appetizers) and Platos Fuertes (entrees). From the bocaditos, we choose the Mango Chipotle Guacamole con Totos Mixtos and the Burn’s Farm Tamal, one safety selection and one shot in the dark type of choice. A string of words to describe the guacamole: HOT, light, sweet, and creamy. The warm, churned texture of this famous Mexican mainstay is accompanied by a mixed bag of dipping chips; plantains cut length-wise, baked multigrain potatos, Malaga de coco or coconut chips, and the standard corn tortilla that never grows old. The guacamole is drizzled with tiny cubes of fresh mango adding a fruity flavor which is even better than expected.

The Burn’s Farm Tamal, our wildcard choice, turns out to be an absolute highlight. When set down on the table by the bubbly waitress, we’re instantly intrigued by its appearance. A child’s fist-sized bulb with knots tied at both ends sits in a dark sauce with floating white cubes at either side. We later learn that these mystery cubes are called Queso Fresco, a mozzarella-like cheese with a soft texture and a mild milky taste. The top of the bulb (a hollowed out corn husk) is open, and we dip our forks inside to find a warm, tender heap of pulled chicken dripping in a spicy sauce. Below the chicken are stringy peppers called rajas that hold little flavor, but contribute nicely to the taste.  This plate is cleaned in no time.

No sooner do we finish the appetizers than our entrees arrive. The first, Vaca con Budin de Papas, is a Mount Olympus-like tower of short ribs marinated in a dark three chili sauce topped in shoestring plantain chips, cubed potatoes, and grilled asparagus. The sauce used in this dish steals the show, offering up a spicy Latin kick that coats the back of our throats, clears our sinuses and begs for a gulp of the margaritas we have nearly forgotten. The grilled asparagus adds a fresh green flavor and compliments the sauce well; as do the soft potatoes, both bearing the distant taste of well cooked bacon. As for the ribs themselves, exquisite would be the word. Tender and smoky, the beef falls off the bone onto our forks and quickly disappears into the growing abyss of Mexican delight.

Next to the mountain of ribs sits a plate containing a melted pile of Lancaster Jack Cheese-covered enchiladas topped with a skewer harpooning three grilled jumbo shrimp. This choice, the Enchiladas Verdes con Camarones Enchipotlatos is your standard Mexican comfort dish. The enchiladas are resting on a bed of rice and black beans while shiitake mushrooms find their way into the mix adding a welcome texture. Very filling and not as rewarding, the ribs are the preferred of the two entrees.

Gazing around the room, we see several jovial groups of men and women and what looks like a few casual dates. There aren’t too many romantic looking couples, although this definitely seems like a great place to have a first or second date. There is a certain buzz about the space, maybe because it is so small, but there is something else in the air, something that feels almost special. People are happy, the staff is busy, and the food is delicious, perhaps the trinity of a successful restaurant.

As if we aren’t filled to the brim already, one look at the dessert menu has us drooling like dogs. We decide on the Pastel de Queso y Nuez con Cajeto, a delight on the eyes and an absolute sin in the mouth. A tiny cloudlike burst of homemade whipped cream hovers on top of a creamy triangle of light sweetness. A caramel and dark chocolate-ancho chile crust at the base adds a cookie-like texture to the soft fluffy center made of goats’ milk and cheese. Tiny pecans slide down the sides of the wedge into a rich caramel pool of pleasure as we dig in with a delicate balance of reluctance and haste until every inch of the small slice has disappeared.

With our bellies full and our minds in a euphoric tequila-induced state, we bid farewell to our waitress and make our way out. Looking back at the red lights of the kitchen and the delightful chattering crowd, we know it is only a matter of time before we return to this BYOT, a little Latin find with a large dose of flavor. 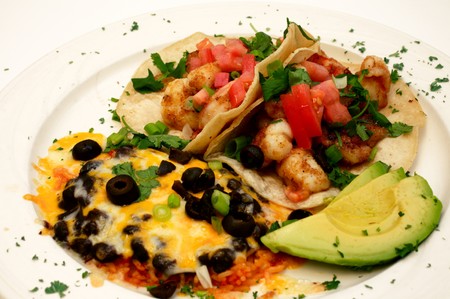