Marrakesh endows patrons with an authentic Moroccan feast, fused with a traditional Moroccan family home setting in the Society Hill District. Accented with imported rugs, vibrant-colored pillows, and sweet incense, the banquet room encompasses everything that is Moroccan decor, allowing guest to lounge in a tranquil environment at a communal table among other diners or a private table. A seven course dining experience, Marrakesh’s menu features arrangement of illustrious Moroccan dishes, which will satisfy guest’s craving for authentic Mediterranean fare. For a reasonable price, patrons can pamper their palates with Tajine of Lamb with Almonds and Honey or Couscons Grand Atlas Topped with Vegetables. Guests will end their meal with a basket of fresh fruits and hot mint tea paired with pastries, which brings the Moroccan experience at Marrakesh to a full circle accompanied with an appeased appetite.

The Soul of South Street

Anointed by Philly’s own R&B group, The Orlons, in their iconic Sixties ode, South Street continues to be the place where the bohemian culture meet. While The Orlons sang of hippies, the shapers and interpreters of pop culture are now generally referred to as hipsters. Defining a hipster is elusive. Just as Louis Armstrong said of jazz, the same can be said of hipsters, “If you have to ask what it is, you’ll never know.” This well-trod funky Philly strip forever rolls with an electric vibe that’s all its own. It’s here that class meets crass. The rich and the struggling commingle as do the young and the aging. The in and the out find common ground in South Street’s dazzling array of restaurants, cafés, music venues, and sometimes strange specialty shops. South Street is perhaps Philly’s only suitable platform for the Magic Gardens, which is, in the words of its proprietor Isaiah Zagar, an art gallery junkyard that showcases in comedic disorder, Zagar’s mosaic madness. Condom superstores, tattoo-hookah parlors, a store selling only African music, instruments and clothing, and a BYOB make-your-own pottery store are part of South Street’s unique marketplace.

Funk is the South Street marquee. It pierces generational walls. It energizes a fun and frenetic scene. But at South Street’s core, it’s the district’s authenticity, rugged and hardcore, that keeps it afloat and vibrant. Somehow, the real manages to buoy the unreal.

In such a wide-open milieu, it’s no surprise that Marrakesh set up shop on Leithgow Street way back in 1977. Leithgow is an otherwise unremarkable ruelle off South Street between 4th and 5th Streets. Marrakesh infuses the street with a whiff of exoticism. Recalling the lyrics to “Year of the Cat,” Al Stewart’s atmospheric tribute to Mideast culture, “there’s a hidden door she leads you to.” Leithgow Street bears the door to Marrakesh. A large Marrakesh sign beckons at the corner of Leithgow and Gaskill Streets. The door isn’t hidden as it is in the song. However, it may be locked. You have to ring the bell for admittance. That’s different.

A step inside evokes more pop-song imagery, this time from the Disney hit, “Alladin”. It’s a whole new world, but don’t look for a sanitized Disney knock-off of a bona fide Moroccan experience. This is the real deal. For those who have visited and supped in Morocco, you’ll relish reigniting the thrill of the dining experience, especially since eating in Philadelphia’s Marrakesh restaurant is more convenient and economic than having to make a trans-Atlantic crossing for the pleasure. For the uninitiated, you’ll bask in a special experience, which is at once unique, bona fide, and fulfilling [with particular emphasis on the “filling,” as you’ll see].

Marrakesh’s interior is mesmerizing, mysterious in appearance and ambiance. Incense wafts through the air. Flat divans covered in soft, colorful, gold-stitched rugs and piled with huge plush, brightly embroidered pillows stretch along the walls. Massive circular golden trays lie in wait in front of the divans, lining up on each side of the main dining room. The trays form a line parallel with a central sunken aisle that traverses the length of the room. Flickering candles provide faint illumination. There are no utensils for dining. Guests eat in the traditional way, with their hands, just as you would in Moroco.

The repast begins in ceremonial style. The server brings hot towels to cleanse the hands, a gesture he will repeat throughout the meal. Each guest partakes in seven different courses, indulging an unembarrassed extravaganza of culinary diversity. Take note that, in and of itself, each course would suffice as a full meal. Portion sizes surpass generous, so plan to depart with a booty of leftovers.

Although the number of courses for the meal is fixed, guests have latitude in choosing the three, yes, three main courses. Not surprisingly, Marrakesh also accommodates vegetarians, and does so with aplomb.

The first course is a gargantuan trio of salads, a bountiful earthy harvest of fresh vegetable flaunting a colorful symphony of natural hues.  The scent of coriander envelops the salads. The coriander that perfumes the sautéed julienned carrots brings out the carrots’ maximum zest. Cooked eggplants contrast deep green beneath a reddish mantle of spicy tomato sauce. They sidle up to a dish of sliced cucumbers supplemented by a rainbow roster of bell peppers. It’s an enticing ensemble. And eating with your hands underscores just how far from the customary and routine your experience is taking you.

I confess to an addiction for B’Stella. I’ve sampled many different versions over the years. Marrakesh’s B’Stella surpasses any I’ve had on this continent. In fact, it can hold its own against any I've had in Northern Africa. What is B’Stella? It’s a Moroccan pie made with chicken and a macédoine of spices, nuts, and finely chopped onions wrapped in phyllo dough.This flaky cousin of mille feuille, amply dusted with powdered sugar, interplays sublimely with the power-packed cornucopia of ingredients buried within. Subtle variances and nuances spark each bite. One forkful might scintillate because of the dulcet verve of ginger and cinnamon. A crisp undercurrent of cilantro might dominate the next. Diced almonds and a tumble of spices including turmeric and black pepper join in the lush chorus of tastes in the pie.

There are three main courses. The first offers choices such as, Chicken with Lemon and Olive, Rabbit with Prunes, and Spicy Chicken in Cumin Sauce. Marrakesh will gladly alter ingredients to accommodate preferences. So if you want chicken with lemon and cumin but with no olives, the chef will prepare it to your taste. Assertive spicing is the hallmark, as are the generous portions. With Chicken in Cumin Sauce, half a chicken covers almost the entirety of the circular serving tray. The chicken skin is marinated in an elixir of spices. The dish is irrigated with cumin sauce that’s lively and spunky and keeps the chicken juicy and succulent throughout. A note to vegetarians: the chicken can be replaced with cracked wheat, lentils and fried onions. The resulting dish is yummy.

Second main course choices include Marinated Berber Beef Shish Kebab, Tajine of Lamb with Almonds & Honey, and Lamb with Chick Peas. The Tajine, a lamb stew, is superb. Tajine takes its name from the earthenware pot used in cooking the stew. After being braised to fork-tenderness, the lamb is slow-cooked. A medley of ingredients lends coherent complexity to the stew, but it’s the crunch of almonds and a sweet undercurrent of honey that elevate this recipe above the standard.

The third Main Course features a spectacular mound of couscous on the serving tray. The couscous is topped with a collage of fresh green vegetables. A fistful of chickpeas mellows the taste of the couscous, which is studded with raisins that infuse it with just the right sweetness.

The feast closes flavorfully and healthily. Nearly an orchards yield of fresh fruits – apples, grapes, oranges, and others – overlay the tray. Did I mention the other dessert, baklava? It’s delicious. In Marrakesh’s version, the phyllo dough is flaky and divinely light. Honey moistens the dough but does not inundate it into soggy banality (the blight of inferior versions). But the major difference maker in the Marrakesh rendition is the use of pistachios rather than walnuts or other nuts. Pistachios, known as the “Queen’s Food”, ever since the Queen of Sheba expressed her predilection for them, feathers in gentle crunch that moderates and mellows the dish.

All in all, there’s hardly a table in town that can match the magnitude and diversity of Marrakesh’s intriguingly uncommon feast. Quality and quantity prove not to be mutually exclusive. The staff is accommodating. And, aside from sheer comfort in practically reclining to eat, Marrakesh also provides more between-table (or serving tray) space than virtually anywhere else. Marrakesh is partitioned into a series of intimate dining rooms spread out over three separate floors. Each accommodates no more than 15-20 diners.

There’s a full bar for mixed drinks and aperitifs. Marrakesh gets passing grades for its bar, but admittedly does not focus on the bar operation. It’s simply not a large part of genuine Moroccan gastronomy. There’s also an adequate stock of wines, including labels from Morocco, California, and France. A few beers are available as well. To accommodate their guests, however Marrakesh lets you bring your own wine and doesn’t charge a corkage fee. That’s a rarity for center-city restaurants.

There’s staying power in a restaurant that’s going strong for 35 years in Philly’s hotly contested restaurant scene. If you need further convincing, since 2005, a third of a million visitors to the website philadelphiarestaurants.com have chosen Marrakesh as the top restaurant in the City of Brotherly Love. Given its popularity, Marrakesh has gone on to colonize Washington DC, where it owns and operates another restaurant of the same name. Of course, unlike Philly’s Marrakesh, DC’s Marrakesh is not smack dab in the middle of where all the “hippies” meet. And for over 35 years, Marrakesh has been as hip a place as South Street has to offer.

Insider Tip: Marrakesh is cash only and there are no exceptions so make sure to hit the ATM before you arrive because plastic is no good here. 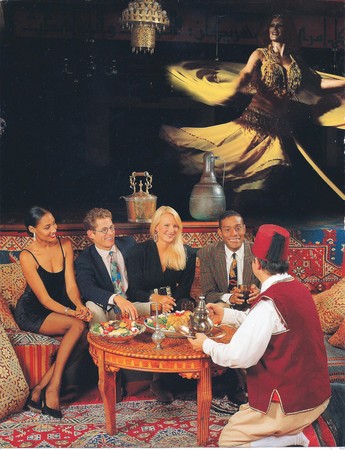 How long have you been open?
30 years
Do you have belly dancers at your restaurant?
Yes, upon request.
Are reservations required?
No, but they are recommended.