Located on Sansom Street, which is well known for its large selection of beloved restaurants, Raw Sushi and Sake Lounge stands out from the neighboring venues. Its simple and enticing façade welcomes diners into a foyer lined with river rocks. Through thick red curtains lies the restaurant, dimly lit by white globes extended low from the ceiling. The relaxed atmosphere allows for slow eating and drinking – multiple rounds of sushi and sake are quite acceptable. The staff is congenial without being pushy, tending to food and drink necessities while giving plenty of space for long conversation and hearty laughter.

RAW: Sushi and Sake to Satiate

Approaching its two year anniversary in November 2008, 1225 Raw Sushi and Sake Lounge has become quite comfortable at its 13th and Sansom Street home. The neighborhood lays claim to trendy restaurants, coffee shops, and clubs galore. RAW fits in well with its neighbors, always welcoming fun and excitement, but it also possesses a calm and peaceful interior.

Co-owners Tony Rim and Binh Diep extensively renovated the historic building prior to opening the restaurant. Upon entering the dining area, both the sushi bar and the drinks bar present a well-kept and fully stocked restaurant. Comfortable suede couches line the walls, accommodating enough for small or large parties, and the outdoor patio is open as a seating area to those who are lucky enough to reach it first on those breezy Philadelphia days. A full bar will soon be available for easy access while dining out on the patio.

1225 Raw happily receives  many types of diners, including casual diners who enter spontaneously, lacking the time or thought to pull on anything beyond jeans and a comfortable pair of shoes, and those who want to enjoy a nice evening out in dresses and ties. A gentle mix of calmness and satisfaction pervades the air of the restaurant with mellow color schemes, low lighting, and pleasantly polite staff members. The modern yet simple touches in the artwork and the seating give 1225 Raw an added flair that does not deflect from its peaceful ambiance but instead emphasizes it. Historical attributes are prominent throughout the building, as it was once occupied by the manufacturing company of the famous Stetson hat. The original Stetson sign visible on the front façade, along with the original brass tile floor with the large S that denoted the inhabitants of the space, offer a feeling of times past and appreciation for Philadelphia’s history.

After settling into my velvety booth, I began my meal with a bowl of miso soup, not lacking in tender tofu cubes or bits of slippery seaweed. It was served warm, as not to burn the tongue, in a black bowl with a white soupspoon. The delicate flavor was just enough to whet my appetite for the food that was still to come.

Along with my miso soup, I decided to try the Beef Negimaki from the small plates selection. Thin, pan-seared slices of beef wrapped around scallions were served warm on toothpicks. The beef was extremely tender, juicy, and flavorful - not at all difficult to cut or bite through. These bite-size treats left me wanting more, and I was satisfied only to know that I still had a large order of sushi to look forward to.

When the sushi arrived, I was not disappointed – quite the opposite. The Sushi Raw Deluxe sashimi platter included two pieces of tuna, two pieces of salmon, one piece of white fish, one piece of shrimp, one piece of eel, one piece of yellowtail, three pieces of the tuna roll, and four pieces of the California roll. All of the fish was cool and fresh, and the rice that served as its underbelly added the perfect texture to complement the smooth feeling of the raw fish. The shrimp and the eel were both served cooked and slightly warm. The tuna rolls were made of tuna and rice wrapped in seaweed, and the California rolls contained cucumber, avocado, masago (smelt fish roe), and crabstick – all wrapped in seaweed and rice.

Although the Sushi Raw Deluxe presented plenty of food, more sushi was on its way. In addition to the platter, we also decided to try a few varieties of the traditional maki. The Tuna and Avocado Maki came with eight pieces of exactly what would be expected - tuna and avocado wrapped into rolls with seaweed and rice. They were served cold and tasted very fresh. The rolls were wrapped tightly enough to make eating with chopsticks a delight instead of a chore, and the colors of the pink tuna next to the green avocado and the black seaweed presented quite a pretty piece of artwork. The texture of the tuna and avocado was slightly more interesting than other Maki due to the duo of strange consistencies found in both the raw fish and the soft avocado. The combination created a very pleasant, velvety feeling.

Served on the same platter as the tuna and avocado maki came an order of the Yellowtail and Scallion Maki - eight pieces of yellowtail and scallion again tightly wrapped into rolls with seaweed and rice. Although the colors of this maki were not varied, the pale tint of the yellowtail, scallion, and rice stood in stark contrast to the black seaweed, giving off a slightly more dramatic presentation. All of the sushi was devoured amidst brief bouts of conversation and laughter. It satiated us to the point of indulgence, and we left quite thrilled with our entire meal.

To complement the Japanese-style meals, an extensive list of sake is available. Available in eight-ounce carafes, the large selection of sakes are divided into categories of dry, light and floral, and smooth balance. In addition, reserved bottle selections are offered as well as mini bottle selections of sake, nigori, and sparkling sake.

The specialty drinks created at RAW are intense and intriguing. With names like Hara-Kiri and Katsu Mojo, containing ingredients such as wasabi, hot chili sauce, and Worcestershire sauce, they are sure to cause a delightful stir for anyone's tastebuds. Included on the list of specialty drinks are two sake flights - each a sample tasting of four featured or premium sakes of the month.

A long list of domestic and imported beer is also available, including many typical Japanese beers such as Sapporo and Kirin. Both white and red wine are available by the glass or the bottle, and sparkling wine is offered by the bottle.

After thoroughly enjoying myself at 1225 Raw, I was quite pleased to discover that a second Raw recently opened in July of 2008. Located on the mezzanine inside Boyd’s, the well-known luxury department store at 1818 Chestnut Street, Raw Cafe is open for lunch service (11:30AM – 3:30PM) every day of the week except for Sundays. 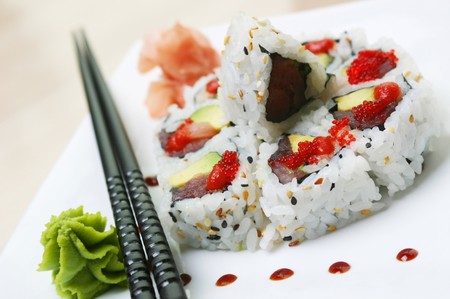 Sushi a la Carte (per piece)