Situated in Philadelphia’s ritziest neighborhood, Rouge takes on the persona of a Parisian café with ease and elegance. Rittenhouse Square is chichi central, and the undeniable draw of this city favorite isn’t the food – it’s the view. Whether you’re looking outside at the bustling park or inside at the attractively attired clientele, Rouge is a place to see and be seen. The menu is upscale comfort – American with a French flair – and the prices are an obvious reflection of its trendy reputation. Where image and appetites collide, Rouge guarantees a truly unique dining experience for all of its patrons.

When it comes to upscale destinations, Rittenhouse Square remains Philadelphia’s prime locale. Comprised of elegant brownstones, high-rise luxury condos and the best shopping south of Manhattan, Rittenhouse is where the city’s elite flock to unwind and let loose. Adjacent to the bustling park, Rouge has made its home in one of Philadelphia’s ritziest neighborhoods, and its undeniable success can be attributed to one thing and one thing only – location, location, location.

Rouge has become known as one of the most romantic restaurants in the city, no doubt because it reflects the old-world charm and comfort of a Parisian café. During the warmer months, the front of the restaurant offers sidewalk seating with excellent views of the park. Even though many Philadelphians escape to the shore during the summer, Rouge’s outdoor tables are filled around the clock, often with parties waiting for hours to snatch up the perfect people-watching seats.

Inside, Rouge is decorated regally with plush banquettes and eye-catching wall hangings. Lush and seductive, the dim lighting accentuates the restaurant’s black and gold coloring, but because of the large, open window, the interior never gets too dark. The clientele is attractive, mature, and trendy, consisting mainly of couples and small parties looking for a more intimate atmosphere. The bar, which sits in the middle of the room and allows for casual dining, is the place to see and be seen. Lively but still relaxed, Rouge achieves the hip and sultry atmosphere owner Neil Stein attempts to express in all of his restaurants.

Stein, who opened his first restaurant in 1973, is among the few who can be considered a Philadelphia celebrity. A notable man-about-town, many critics claim Stein reached his peak in 2000 after opening up several city favorites such as Avenue B and Striped Bass. By 2003, financial trouble caused him to declare bankruptcy, and the famed restaurateur checked himself into rehab. Despite his professional and personal troubles, Stein has deservedly earned the reputation as a pioneer, and his creativity can be seen in all of his businesses.

As if Rouge’s patrons weren’t trendy enough, its waitstaff is the ultimate in everything young and hip. While I had heard rumors of snobbish behavior among Rouge’s employees, I never experienced it myself. The hostess was cheery and helpful, and my waiter immediately greeted me with a smile and some warm bread. After finally settling in, I was faced with the task of ordering my meal, which was going to be no small feat.

Head Chef Michael Yeamans has mastered French food with a twist, and while his attempts may not always be superiorly executed, they are still noble. The menu is a compilation of comfort food and simple elegance. Macaroni and Cheese and Petite Veal Milanese share the same home, and a balance of meat and seafood offers patrons a variety of choices.

I began my meal with a traditional favorite – French Onion Soup. Served rustically in a hearty earth-colored bowl, the deep brown broth was rich and salty. The blend of sharp provolone and nutty gruyere cheese enveloped the soup like a blanket, and the slivers of sweet onion were abundant in every bite.

For an unconventional twist, I opted for the Seared Day Boat Sea Scallops. The large and luscious pillows of fresh scallops rested delicately alongside tender fingerling potatoes that were accented by tangy sour cream and lemony thyme. Salty haricot verts bacon butter was drizzled lightly on top the fish and potatoes, cutting into the bright white scallops and golden yellow fingerlings without masking their natural flavors.

For my entree, I chose a classic French favorite – Herb Roasted Chicken Breast. Gently spiced with a blend of earthy seasonings, the chicken was moist and delicate as it lay on top of a bed of deep green spinach. A smooth and perfectly whipped pile of potato puree—Yeamans’s take on simple mashed potatoes—was creamy and a perfect enhancement of the chicken’s tenderness. To tie it all together, Yeamans used the chicken’s natural juices. Light and flavorful, the au jus pooled on the bottom of the plates and flowed around the chicken and potatoes like a river.

With all of the upscale menu options, it’s somewhat surprising that the best item on the menu is the Rouge Burger. While I cannot concede that it’s the best burger in Philadelphia, like some claim, it’s certainly a worthy contender. In fact, GQ Magazine voted it one of the 20 hamburgers you must eat before you die. The 10 ounces of seasoned beef was more than a mouthful, and the melted gruyere cheese added a sweet and salty creaminess to the meat. The caramelized onions were a nice addition, but I would have preferred them raw for more of a punch. The burger was so rich and luscious that I thought the spiciness of raw onion would have added a new depth of flavor. Served traditionally with a heaping helping of fancy fries – pommes frites – the Rouge Burger did not disappoint. Whether it was a hamburger I had to eat before I die is a whole other debate.

The servings at Rouge can be small for the price, so the option of side dishes tends to be popular. Just like every other aspect of the menu, the sides are pricy, but they are indeed tasty. Garlic Spinach and Butternut Squash Puree are safe bets, but a definite indulgent treat is the Truffle and Parmesan Pommes Frites. French fries get a facelift with a salty bite of parmesan cheese and rich undertones of truffle oil, making the frites a perfect accompaniment to any meal.

Rouge’s beer selection is lacking, but their wine list offers plenty of selections from a variety of locations. Naturally, French wines abound, but Italy, South America, and Australia all get substantial recognition. While there are plenty of choices when it comes to hearty reds and crisp whites, the prices are the same – expensive. Just like the food, Rouge’s wine list may hurt your wallet.

After a dinner at Rouge, I felt as if I should be heading back to my hotel room in Manhattan. Not many restaurants in Philadelphia rely so heavily on image, though Rouge’s location is a major contributor to that vibe. The bottom line? The food is good, the location is great, and the atmosphere is even better. I felt as if I was truly indulging in a glamorous night out without having to dress up. We all need a hip and trendy night out every now and then, and Rouge most certainly offers that. 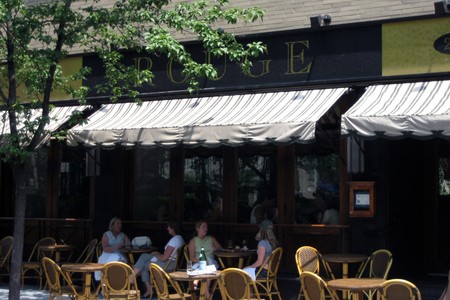