If eating inexpensive Italian favorites in a family atmosphere is your desire, then Spaghetti Warehouse is a restaurant you might want to consider. Located in Lower North Philadelphia, Spaghetti Warehouse offers a menu full of dishes that remind one of home, like Spaghetti and Meatballs and Baked Penne. This “warehouse,” decorated with antique merchandise signs, is large enough to accommodate the most extended of families. With features such as a full bar for those who want to enjoy a few drinks and a trolley car in which the kids can eat and play conductor, this spot has a little something for everyone.

The city of Philadelphia is so full of historic landmarks—the Liberty Bell, Constitution Hall, Geno’s Cheese Steaks—that one begins to wonder if the bustling people of Philadelphia actually moonlight as historians. More than many cities, Philadelphia boasts countless attractions with long histories. It is no surprise, then, that Spaghetti Warehouse, a restaurant one is likely to read about in almost any traveler’s guide to Philadelphia, has a rich and interesting history.

The over 100-year-old building in which the Warehouse is housed was once home to the Spring Garden Farmer’s Market, a truck and tire warehouse, and a short-lived nightclub. When, in 1991, founder Robert Hawk decided to turn 1026 Spring Garden Street into Spaghetti Warehouse, a chain that boasts more than 22 locations in nine states, he thought it very important to preserve the historic feel of such an historic location.

Indeed, the second you step into Spaghetti Warehouse, you feel as if you have been transported to a different time and place. The huge, carpeted building, which can accommodate 525 guests, is filled with antique relics like an old barber’s chair in the foyer, old merchandise signs lining the walls, a brass canopy bed that holds up to ten people, and, of course, an old trolley car in the center of the main dining room.

When my guest and I arrived, the greeters made a point of asking where, in this expansive space, we would most like to dine.  We chose a seat by the window and anticipated our dining experience. It was not until then that I fully realized the next most distinguishing characteristic of Spaghetti Warehouse—its family atmosphere. While the noise level was not unbearable, when I began to listen closely I could hear the laughter of elders, the delighted screams of babies, and the running feet of toddlers. Rather than seeming annoying, these sounds reminded me of home, as if I had been invited to someone’s family reunion.

A look around confirmed this feeling—though many come to Spaghetti Warehouse to enjoy the spaghetti, many more come grateful for a place where the kids are welcome. The restaurant has a daily Kids’ Menu, which includes kid favorites like spaghetti and meatballs and mozzarella cheese sticks. These $4.50 and under meals come with sourdough bread; a choice of soup, salad, or applesauce; a drink in a take home cup; and ice cream for dessert. This is good news for any parent who wants to take his or her kids out for a treat without taking a fortune out of the bank.

Though my guest and I brought no children with whom to enjoy our meal, we enjoyed the company of those who did and finally had a look at the adults’ menu. There we found appetizers, soups and salads, pasta favorites, parmigianas, and desserts. Before we decided what to eat, we ordered a pitcher of the White Sangria, which is Spaghetti Warehouse’s spin on the classic red sangria, which they also offer. Beyond sangria, they also have a modest selection of red and white wines, including their own house wines, and a full bar for other drinks.

As we enjoyed the soft, chewy sourdough bread, which was served with a garlic butter that was not too sweet and not too salty, we saw our waiter, Keith, coming toward us. In his hand was a plastic pitcher filled with fruit juice and cherries, a bottle of Sutter Home White Zinfandel, two wine glasses and a wooden spoon. We were humorously surprised when he sat the pitcher down in front of us, opened the bottle of wine, poured it into the pitcher, stirred the mixture with the wooden spoon, and poured two glasses, leaving both the pitcher and the wooden spoon at the table when he walked away. Laughing, we sipped the White Sangria, which I enjoyed, but was too sweet for my guest’s liking.

Soon after that the appetizer we had ordered arrived: Toasted Ravioli. Seven round ravioli were served in a bowl with a plastic cup of marinara in the center. The breaded and brown ravioli were garnished with grated parmesan cheese and parsley. Eagerly, I put one of the ravioli onto my plate and spooned some marinara on top. Filled with herbed ricotta cheese, the ravioli were actually deep fried rather than toasted. The breading was thick, yet it did not distract from the filling.  I had only one, as I wanted to save room for my meal.

Spaghetti Warehouse has so many traditional Italian offerings that it was difficult for my guest and me to decide what to order as our entrées. Though I love a good parmigiana, I opted against the Warehouse’s chicken, veal, or eggplant parmigiana, as we had already had something breaded. My guest considered the handmade 15-layer lasagna, a decadent and unique offering I had once ordered during a previous visit. We were also intrigued by the Seafood Palermo, a spaghetti dish that boasts garlic shrimp and shell-roasted clams in a wine sauce. In the end, however, we opted for more traditional fare: the Bottomless Soup and Salad and Spaghetti with Rich Meat Sauce (which also came with a Bottomless Salad).

Our salads, mine the Caesar and my guest’s the Tossed Salad with Italian dressing, came soon after Keith took our order. My guest was satisfied with her salad, mentioning that the salad dressing was tasty. I, too, was satisfied with my Caesar, though I noted the excessive amount of grated parmesan cheese used as garnish. For those who like authentic Caesar salads, this is not the place, as the romaine lettuce was coated with a dressing that could easily be found in the grocery store. It was still satisfying.

After waiting 20 minutes and finishing half my salad, I ate my Minestrone Soup. Well-seasoned and full of white beans and vegetables like zucchini, celery, and carrots, the soup had a meaty, hearty flavor. All in all, it was the best tasting dish I had at Spaghetti Warehouse.

As I enjoyed my soup, my guest received her main dish, Spaghetti with Rich Meat Sauce, which came in a bowl garnished with parsley. Because it did not come tossed, she sprinkled grated parmesan cheese on top of it and mixed it with her fork. While it looked to me like the spaghetti and meat sauce of my childhood that my mother would prepare on days when she did not feel like spending any time in the kitchen cooking, I was interested to hear what my guest’s own opinion. Commenting that the spaghetti noodles were “mushy” and that the sauce was “nothing special,” she nonetheless ate the whole thing.

Though we were both full after eating, we ordered a slice of New York style cheesecake. Soft and rich, the cheesecake was good, although not spectacular.  At the end of our meal, my guest and I were full but not thrilled. On the other hand, our mood was kept light throughout the meal due to the many families around us and the dwindling White Sangria. When our check came, our mood was heightened even more, as the total was less it would have been at many other Italian restaurants.

Spaghetti Factory also offers many specials, including College Thursday, where college students can bring in their college IDs for ½ price lasagna and $2 Yuengling Light bottles, Friday night Murder Mystery Shows, and Saturday night  Comedy Dinners, both for $24.95, including show and dinner.

The moral: if you are trying to impress a first date or win over a client, this is not the restaurant for you. If, however, you are looking for a nice place to bring your family for a celebration or just a dinner out of the house, then this is a good bet. The food will not wow you, but the atmosphere will remind you of the warmth of a full belly and familiar faces. 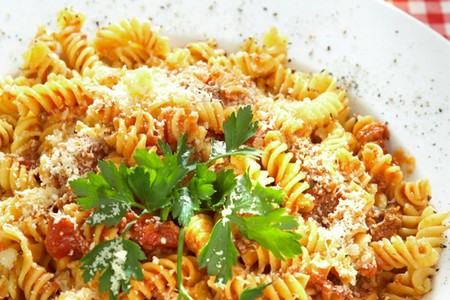 Served with Sourdough Bread and your choice of bottomless Tossed Salad or soup. Substitute Caesar Salad for only $.99

Served with Sourdough Bread and your choice of bottomless Tossed Salad or soup. Substitute Caesar Salad for only $.99

Served with Sourdough Bread and your choice of bottomless Tossed Salad or soup. Substitute Caesar salad for only $.99