Stella Blu is an inviting destination for locals and newcomers alike. Be it a romantic dinner, a relaxing drink after work, or an evening of live entertainment, this smart and sophisticated West Conshohocken bistro sparkles. Bask in the glow of the exceptional customer service, including valet parking, a welcoming ambiance, and the newly expanded Star Bar. The extensive international menu includes such favorites as Lobster “Mac & Cheese and Wild Mushroom Ravioli. The food is heavenly, the décor is celestial, and the customer is always the star at Stella Blu.

A Shining Star in West Conshohocken

West Conshohocken used to be defined by the Schuylkill River, which runs through the center of the borough.  Today, the mills that relied upon the river for transport have been largely replaced by office complexes and the Schuylkill expressway provides a river of cars for transportation.  Many years ago, the people who worked in the mills looked for local places to gather after work.   Today, the neighborhoods on the hills are filled with the people who now work in the tall glass and concrete structures.  After work, they want the same thing the millworkers wanted: a place to walk to, grab a bite to eat, and have a few drinks with their friends.  Stella Blu, and its more casual sister restaurant The Gypsy Saloon, fulfill that desire.

In 2001, Kim Strengari, Marianne Gere, and Ralph Pallarino joined together to create a friendly neighborhood bistro.  I’ve often found that a restaurant reflects the personality of the owner, and Stella Blu most definitely does.  It’s warm and welcoming, distinctive and fun, yet elegant and sophisticated.  The décor and menu were updated in 2007, expanding the Star Bar to seat 12 people and adding an international flair to the food.

The restaurant is located on the corner of Front and Ford streets, in an old stone building with bright blue trim.  The owners have thoughtfully kept the price of the valet service very low, and it beats trying to find parking on the narrow hilly streets around the restaurant.  Stella Blu can fit 60-80 people, and although there are no private rooms, the back of the restaurant can hold 16-18 people for a larger party; on average most of the tables seat 2-4 people.  They are normally closed Sundays, but can be booked for private events.

In the restaurant’s vestibule, you’ll see a large silhouette of Audrey Hepburn.  Inside the restaurant, there are yet more silhouettes on the walls and even the bathroom door.  Everywhere you look, you will see a subtle blend of stars and swirls, a recurring theme in the decor.  The textured wallpaper has swirls with large golden star-shaped lights in the center.  Stars and crystals hang from the ceiling accompanied by the chandeliers in an ornate mix of clear glass with blue accents.  This matches the blue track lighting over the bar, the gold-framed mirrors adorning the back wall, and even the blue star-shaped bowls of party mix on the counter.  In the back of the restaurant, the tables are lined up along cushioned benches, with fluffy throw pillows adding a homey touch.  The atmosphere of the restaurant is one of graceful comfort.

On weekdays, the appropriately named Star Bar is crowded with locals taking advantage of happy hour.  From 5pm-7pm, the martinis are $5, and the small plate entrees are half price at the bar.  If you come alone, it won’t take long before the amiable people draw you into their conversations.  Most likely you’ll meet one of the owners sitting at the bar chatting with their guests.  Often the topic of conversation is the game on the big-screen television at the center of the bar.  On Thursday, Friday, and Saturday evenings, all attention turns to the live entertainment.

In addition to the expertly mixed cocktails, Stella Blu offers an extensive wine list.  With 20 different wines available by the glass and 45 available by the bottle, it can be hard to choose.  Fortunately, the wine list itself clearly describes the wines and the wait staff will readily help with information on which wine to pair with your meal.  According to Marianne Gere, one of the owners, the wines on the list are chosen for name recognition, popularity, and value.  The markup on them is far less than in most restaurants to encourage diners to try new varieties.  Although many of the wines are from California, there are wines from Italy, Australia, and South America as well.

The menu at Stella Blu is divided into small plates and large plates.  Luckily, many savvy restaurants are starting to do this as it allows diners to sample more dishes.  Our first menu item was the Crispy Calamari and, although listed as a small plate, it arrived as a huge portion piled high on a rectangular serving dish.  The breading was  golden brown, light and crunchy, letting the delicate flavor of the tender calamari through.  If you are a fan of malt vinegar with your French fries, you’ll understand that the best part of the dish was the aged balsamic vinegar that was drizzled generously over the top.  The balsamic complemented the calamari both with its sweet and mild tangy taste, and its rich brown color against the light breading; it was served with bright yellow wedges of lemon on the side.

I’ve been disappointed with many antipasto salads in restaurants.  So often it’s just a mound of pickled vegetables on a plate; not so with Stella Blu.  Our Antipasto Salad was very authentically Italian, a feast for both the palate and the eyes.  When presented with the plate, I was torn on where to start; there was so much and it looked so good.  On one side of the plate was the marinated eggplant, house-made with mushrooms and a light vinaigrette.  On the other side were shreds of roasted red peppers.  In the middle there was spiced tuna full of fresh, fragrant Italian herbs.  Sharing the spotlight with some very sharp, aged provolone in the center of the dish were two whole roasted hot peppers.  The entire array was served on a bed of lettuce dressed in a lemon and olive oil vinaigrette.  The glistening salad was served with garlic bread made of sliced baguette.

Our next small plate was the Wild Mushroom Ravioli.  Three huge square ravioli nestled in a smooth white sauce were topped with walnut halves, roasted mushrooms, and slices of aged Pecorino Romano cheese.  The earthy smell of the roasted mushrooms mixed with the pungent smell of the cheese made my mouth water.  That mix of mushrooms and cheese worked as well in the moist brown filling as in the toppings.  The rich sauce was velvety on the tongue, with the crunchy walnuts providing an intriguing contrast.

The Lollipop Lamb Chops at Stella Blu won  my approval for a delicious lamp chop.  The delectable meat, seared on the outside and pink on the inside, was so tender that no knife was needed.  The four chops were served with a square dish of cooling mint-cilantro yogurt on the side, and the sauce was surrounded by a ring of red-hot smoked chili oil.  Not only did the yogurt counter the heat of the chili oil, but the white yogurt with green flecks of fresh herbs, surrounded by the bright red-orange oil, presented an appetizing picture.  The mix of flavors was mild enough that you could still taste the delicate lamb with the sauce.

For a large plate we decided to try Stella Blu’s “Best of Philly” award-winning dish, the Lobster Mac & Cheese.  This upscale version of the familiar comfort food combines three different cheeses (Asiago, Parmesan, and goat cheese) into a luscious and creamy sauce.  The base of the dish is a bed of giant fusilli pasta with ridges to hold more of the sauce.  Large chunks of bright red lobster  were hidden throughout the dish and the entire entrée was topped with a crunchy, baked Parmesan crust.  It’s fun to watch people try the dish for the first time; they almost always close their eyes for a second due to the sheer ecstasy of the taste, and to the memories that mac & cheese invoke.

In many ways, this dish represents the character of Stella Blu:  Once you’ve tried it, you’ll want it again on a regular basis.  You’ll also want to share it with the people you care about.  It’s friendly, familiar, and comforting, but with an unexpected originality and a very large touch of class. 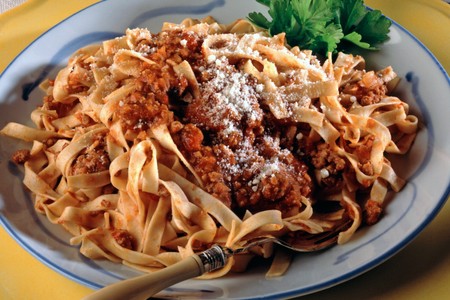 Is The Gypsy Saloon part of your restaurant?
No, it is the sister restaurant to Stella Blu (that’s just a ½ block away).
Do you have a bar?
Yes, The "Star Bar"