Tequilas shows the highbrow side of Mexico’s popular elixir. Soak in a margarita at the outdoor tables, perfectly situated for watching well-put-together Rittenhouse folk cross the corner of Locust and 16th. Inside, a high-ceilinged space provides an elegant backdrop for Owner David Suro’s classic vision. He brought the fruits of his homeland to Philadelphia in 1986, establishing a Mexican presence in the city’s culinary spectrum. Other spots around town have since twisted Mexican fare into a modern adventure, but chef Claudio Soto’s plates continue to showcase a brute traditionalism that brings diners to the root of it all.

The Spirits of Mexico Are Alive at Tequilas 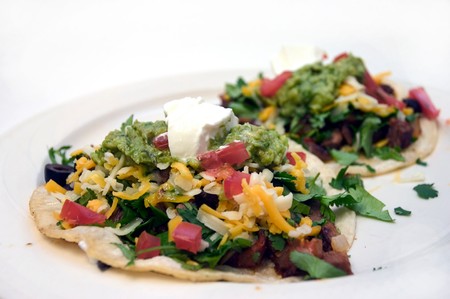 What do the characters in the murals represent?
They are a symbol of victory, a caricature, a celebration, Revealing a willingness to laugh at ourselves.
Who is the artist that painted the murals?
The artist is Clemente Orozco Farias.
How many kinds of Tequila do you serve?
102

Ensalada Nopalitos 8.95
The most Mexican of the Mexican salads. Boiled tender prickly pear leaves cut into small seasoned pieces mixed with tomato, cilantro, onion, olive oil and vinegar. Served with tortillas.
Ensalada Cesar 8.95
Hard to believe but in the late 1920's cesar salad was created by two brothers (Alex and Cesar Cardini) in their Tijuana restaurant. A dish like many other dishes that originated in a country with which it is not associated.
Ensalada Chipotle 10.95
Spring mix, tomatoes, onions and avocados with an exquisite chipotle vinaigrette.

Sopa de Tortilla 7.75
Probably the most popular Mexican soup. A perfect blended combination of epazote, tomatoes, guajillo pepper and tortilla. Served with or without chicken.
Crema Conde 7.75
Classic cream of black beans served with bacon, queso fresco, onions and croutons on the side.
Sopa del Mar 10.50
Shrimp and grouper swimming alongside in an ocean of guajillo peppers.

Pescado al Mango 22.95
A rare mixture of the fresh fish of the day, lightly breaded, grilled, stuffed with guacamole, seductively paired with a mango and ginger sauce.
Huachinango a la Veracruz 25.75
Whole red snapper, deep fried and served with a mild Mexican sauce of tomatoes, onions, olives, capers, red bell and green peppers.
Enchiladas Playa 23.95
Flour tortillas stuffed with crabmeat, shrimp and lobster, topped with melted Chichuahua cheese, served with sauces made of creamy poblano and chipotle peppers.
Salsa Tequilas 0.00
The favorite son of the Mexican soil, tequila, is venerated, fused with chile de arbol, a little butter, garlic, and lime juice. Can be ordered with the robust jumbo shrimp, a succulent whole red snapper or with the fresh fish of the day.
Camarones Rellenos 23.95
From the Pacific coast, restaurants in the states of Nayarit, Colima, Sinaloa and Sonora offer this dish. Shrimp stuffed with Chihuahua cheese and wrapped with bacon. Deep fried and served with Mexican rice and vegetables.

Carne Aguacate 21.75
This dish originated in Michoacan, a picturesque region known for its colorful handcrafts, lakes, mountains, religious festivals and the best avocados grown in Mexico. Stuffed with mushrooms, tomato and epazote. Finally, it is covered with a light creamy sauce made of avocado and cilantro.
Cochinita Pibil 20.95
Fresh tender pork marinated in achiote, citrus and Mexican herbs, baked and served on a banana leaf accompanied by fried plantains, rice and refried beans.
Carne a la Trenza 22.95
Trenza (braids) are par excellence the most fashionable style for the country woman. Our chef gives this rich dish, based a beef filet, the look of the trenza worn by our Mexican heroines. This choice cut of beef is placed on top of our famous chorizo sauce.
Filete Grito 21.95
The cactus leaf is a bed with the tropical tamarindo sauce inviting the chile chipotle to participate as a witness in the lynching of the fabulous filet mignon, along with the chiles serrano.
Molcajetes de Carne 21.95
Your beef tenderloin served in a lava rock bowl, which is pre-heated. Covered with a spicy sauce made from tomato, garlic and chile de arbol, accompanied by corn tortillas to make your own tacos.
Carne Asada a la Tampiqueña 21.75
Our chef selects a thin slice from lean steak. This in turn is seasoned and grilled. Accompanied by a tamal, guacamole, rice, refried beans and a chicken taquito.
Medallon Chipotle 22.95
Filet mignon served over a corn tortilla, topped with a layer of Oaxaca cheese and served in a chipotle pepper sauce.
Chiles Rellenos 18.95
A pair of poblano peppers, one stuffed with cheese the other with picadillo, prepared with onions, garlic, raisins, bay leaves, apple and original spices stuffed inside poblano peppers which are egg batter fried. Presented in our traditional red sauce topped with fresh cream.