The key to The Saloon’s longevity over 40 years has been its unbeatable Italian cooking and the comprehensive service it devotes to every meal. Whether it’s an oversized celebration or an intimate table for two, The Saloon creates a distinctly customized dining experience for every patron and, as a result, has earned a loyal following that draws visitors from around the region. The menu is chock full of Italian classics while the kitchen creates sumptuous daily specials that will entice every palate. Old World charm and exacting standards combine to make The Saloon a sought after destination for hearty Italian cuisine in the heart of Philadelphia.

Dinner at The Saloon is like walking into another era where the servers all know you by name and local business scions take meetings at corner tables as on-lookers whisper over their Veal Parmigiano.  In fact, my perch on the restaurant’s top floor was directly beneath a larger-than-life Godfather montage featured on national magazine covers.  While it was fun to dig into the restaurant’s delicious Italian American cuisine beneath the watchful eye of De Niro, Pacino, and Brando, it was an even greater treat when our server pointed out the painting’s artist sitting at the other end of the room.  Like all the regulars there, he was exceedingly welcoming and reflected a sense of history infused throughout The Saloon.  After a few minutes of chatting, it was clear that the artist, Charlie Santori, embodied the eatery’s distinct flair and its ability to create a local community around which so many Philadelphians have rallied.  From achingly good food to a famiglia of regulars, it is a testament to The Saloon’s indelible character and enduring quality that the restaurant inspires such fervent loyalty in its long time patrons.

The restaurant’s history stretches almost four decades in the Bellavista section of Philadelphia and has long been cherished as a valuable addition to the city’s shifting culinary landscape.  Chef Reyes commands the kitchen with aplomb and has continued to perpetuate The Saloon’s reputation as a true foodie destination for Italian cuisine lovers.  Nestled on an unassuming block of South 7th Street, the restaurant boasts an imposing façade as well as a nearby bakery and café that supplies the main building with its spectacular desserts.

The establishment prides itself on showcasing Philadelphia’s lauded local “folklore” along with its famous dishes.  Certainly, one glance inside the embellished walls is like flipping through a history book of regional highlight.  Masterfully restored signs and artifacts sit side by side more contemporary artwork, while diners enjoy The Saloon’s irrefutable charm.  The building itself plays a central role in each meal and diners should take time to discover the restaurant’s vast square footage.  Sheaths of regal wood paneling sweep across the interior as tables line the walls to create a welcoming space for diners to mingle and explore the restaurant’s multiple floors.   During our meal, the beautifully crafted stained glass windows allowed early evening light to stream through, giving the restaurant a cathedral feel.  Certainly, for many patrons, The Saloon is a temple of exquisite Italian food, while for newcomers it offers a new world of exploration to enjoy.

The waitstaff is dedicated to recalling the warmth of home-style meals with family.  Their attention to detail and uncommon ability to recite a wealth of nightly specials is reason enough to visit The Saloon.  We were very well taken care of and received a number of helpful suggestions when faced with such a broad selection of tempting dishes.

To begin the meal, we started off with dirty martinis that arrived expertly mixed and set the tone for the evening.  Each drink, one made with vodka and the other with gin, was crisp and smooth while exhibiting the right hint of brine to top off the flavor profile.  For diners interested in wine or beer, The Saloon showcased a large selection of options to please nearly every palate and budget.

Right away, our appetizer boded well for the rest of the meal.  A seafood platter piled high with every imaginable shellfish arrived with a breathtaking flourish.  Its sheer size was a sight to behold even before we sunk our forks in.  Langostinos bordered the dish and displayed a delectable texture that blurred the line between being buttery and flaky.  Lump crab meat graced one corner of the appetizer platter and quickly became my new favorite seafood.  The crab’s sumptuous texture was rivaled only by its rich flavor that enveloped the senses.  Clams Casino came in as a close second topped with diced celery, red peppers, parmesan cheese, and bacon.  The dish was a shrine to The Saloon’s commitment to serving quality seafood in an equally enticing setting.

Next, we indulged in the Poblano Peppers, whose veal stuffing was delectably sweet.  Topped with mozzarella cheese and encased in a slightly hot pepper, the veal was a great way to experience the chef’s skillful way with classic Italian meats and remains one of his signature talents.  The Poblano Peppers were mild and provided a welcome contrast to the overflowing seafood platter.

Hoping to pace myself, I also ordered an appetizing salad that exuded a cornucopia of flavors.  The Poached Pear Gorgonzola Salad was a delightful foray into The Saloon’s lighter side and proved to be a great palate cleanser for the upcoming dishes.  The salad’s baby greens were crisp and fresh with its roasted walnuts and pear vinaigrette dressing adding an extra layer of complexity to the refreshingly straightforward flavor profile.  The gorgonzola cheese was a sinfully rich accoutrement and effectively elevated the dish from mere salad to an attention-worthy course of its own.

Our main courses were the Filet Moda and the Veal Chop Scarsini.  The former was a symphony of flavors that seduced the taste buds one peppercorn at a time.  It began with a tenderloin of beef in which every bite showed off the chef’s tremendous ability with fine meats.  The dish arrived medium rare and achieved the ideal shade of pink.  Its flavor was sweet and communicated the nuanced interplay between the peppercorn-encrusted exterior and a creamy cognac mustard sauce the surrounded it.  The sauce took beef to new heights and truly satisfied my love of tart flavor notes when enjoying steak.

The Veal Chop Scarsini relied on Italian cooking classics to deliver a one-two punch of deliciousness. Marinated in rosemary sauce and garlic, this veal dish exuded a subtlety rarely found in most Italian restaurants.  Of course, The Saloon is miles from ordinary and the chef takes distinct pleasure in surpassing diners’ expectations.  I was impressed with the Veal Chop Scarsini’s white wine sauce and how its flavors danced across the tongue, never quite settling on one ingredient.  The taste was a multi-faceted experience that brought in musky seasoning notes as well as hints of garlic that added a welcome kick.  As if the preparation was not decadent enough, the dish was also topped with an envy-inducing heap of jumbo lump crab meat that drew stares from nearby patrons.

For dessert, we were treated to a dazzling tray of homemade desserts that our server presented to us tableside.  The selection was vast and included treats such as Coconut Cream Cake and a host of Italian delicacies.  I settled on the Tiramisu and was not disappointed.  Its lusciously crafted layers proved the fitting end to our indulgent meal.  The dish’s delicate lady fingers are often the test of a talented pastry chef and this dessert proved that The Saloon and its nearby bakery has a monopoly on the city’s finest kitchen savants.

Lovingly crafted and meticulously prepared, The Saloon’s cuisine is a compelling reason to enjoy your next Italian meal in the Bellavista neighborhood of Philadelphia.  However, it’s the restaurant’s fantastic staff, the building’s rich history, and the charm of its regular patrons that have made this spot an unmissable destination for local diners and visitors alike.  After an evening of lively mingling and stellar hospitality, we left full, impressed and feeling like family. 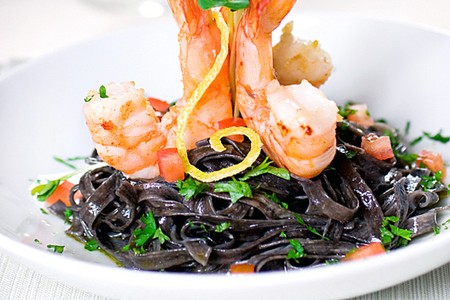