Located in Philadelphia’s most scenic area, Water Works Restaurant is a feast for the eyes as well as the stomach. Nestled high above the Schuylkill River behind the city’s prized Museum of Art, Water Works boasts awe-inspiring views of a serene waterfall, tree-lined riverbanks, and the luminous Boathouse Row. Contemporary American with a Mediterranean flair, Water Works’ cuisine attempts to balance the restaurant’s superior atmosphere with rustic yet elegant dinner options for all ages and tastes. Growing in popularity by the day, Water Works—owned by Michael Karloutsos—has become Philadelphia’s most visually astounding dining hotspot.

The view just can’t be beat, plain and simple. Philadelphia is rich in cultural history and unpretentious charm, but none of the city’s most treasured dining spots can boast a view as beautiful as the Water Works Restaurant and Lounge. Nestled high above the Schuylkill River behind the city’s prized Museum of Art, Water Works boasts awe-inspiring views of a serene waterfall, tree-lined riverbanks, and the luminous Boathouse Row. No other dining locale can compete with that.

Truthfully, the atmosphere was the first thing to draw me to the restaurant. Water Works is located in Philadelphia’s most scenic area, so I figured the food would be as equally pleasing. And if it wasn’t, I would still manage to enjoy some of the city’s most exquisite views. Luckily for me, the food did not disappoint.

Before it became the elegant dining location it is now, the Fairmount Water Works was a popular tourist attraction. During the 1800s, Philadelphia residents and visitors were eager to witness how the city’s prime water source worked – an industrial marvel in its day. The Fairmount Water Works pumped five million gallons of water into the city every day, but by 1909, problems with industrial pollution and more advanced delivery systems had put the landmark out of business. Many prominent businessmen and entrepreneurs were interested in acquiring the property, but it wasn’t until a New Yorker came to town that Water Works was brought back to life.

Once I stepped into the lounge, I saw firsthand how Karloutsos managed to retain Water Works’ beloved history. The relaxed bar area was once the caretaker’s house and is stocked with an impressive list of high quality spirits and international wines. Ranging in price from somewhat affordable to the ultimate splurge, the wines mainly stem from the Mediterranean region that the cuisine is inspired by – Italy, France and Spain, to name a few. But the high-class drink of choice at the restaurant is, ironically, water.

Water Works famously maintains its own “water bar,” a Philadelphia first, which is complete with a water sommelier and a water list of over 20 varieties – domestic and international. Prices range from $4 to $50 a bottle, with Bling H20 claiming bragging rights as the restaurant’s top seller. Since I had no interest in exploring the many tastes and varieties of water, I cannot vouch for the validity of such a restaurant feature, but rest assured, plenty of patrons were indulging in the elaborate water bar.

Once I entered the main dining room, which was once the Engine House of the older landmark, my eyes locked on a nine-foot water wall and a pair of gigantic crystal chandeliers that hung regally from the vaulted ceiling. I managed to grab a seat on the outdoor terrace, which seats about 150, which was lucky. Despite its spectacular location, Water Works’ main indoor dining room offers very few seats with views of the river. Manager Ed Doherty, previously of Capital Grille, keeps the place running like a well-oiled machine. The classy yet relaxed vibe of the dining room is a direct result of Doherty’s finesse and professionalism.

A spread of warm bread, rich Greek olive oil, salty green and black olives, and roasted red peppers arrived with the menus, which only whetted my appetite further. Water Works’ cuisine is mainly contemporary American with a Mediterranean flair. I could see the presence of Karloutsos’ Greek heritage on the menu, as well as some Mexican influences – not doubt the result of head chef Adan Trinidad’s personal and professional background. Formerly of El Vez fame, Mexican native Trinidad has created a menu that strives for excellence even if it doesn’t always achieve it.

Water Works has a lovely selection of appetizers, with the grilled octopus being my favorite. Marinated for two days in garlic, olive oil and cilantro until admirably tender, the bed of creamy white octopus gets a shot of color and flavor from slices of red onion. The meatball dish was an earthy combination of salty lamb, seared to perfection, which sat on a bed of pureed roasted eggplant. The golden yellow tomato puree added a punch of acidity to the rich flavors as well as brightness to the otherwise basic-looking dish.

Another stand-out appetizer would be the oysters. Prepared three ways, each version highlighted the oysters’ deep flavor. The shellfish trilogy fanned out on the plate, begging to see which I would choose to try first. One of the oysters was deep-fried in crispy panko crumbs and then placed back into its shell. Accented by the saltiness of melted feta cheese and the mild bitterness of spinach, the fried version still managed to capture the oyster’s metallic undertones despite its strong accompaniments. Another oyster was bathed in a tangy mignonette. The deep shell worked as a bowl, capturing the natural juices of the oyster, and the mignonette’s acidity was a nice contrast to the previous deep-fried option. Finally, a shooter rounded out the trio. Served in a shot glass, mint froth delicately engulfed the oyster, with a cucumber slice used as the glass’s coaster. As a final touch, a sour Granny Smith apple chip rested on top like a bright green piece of confetti. The party had definitely started.

After I partook in several seafood-based appetizers, I had to order the rack of lamb as one of my entrees. Bone in, naturally, the golden brown seared meat rested atop soft pillows of goat cheese. For a splash of color, watercress artichoke salad framed the lamb, and a honey-mint sauced drizzled over the entire plate. The meat was salty, the goat cheese creamy, and the salad tangy. I would have preferred less sweetness in the honey-mint sauce, but all in all, it was an ambitious combination of flavors that was executed to near perfection.

My favorite dish of all time would be mushroom risotto, so ordering the Water Works’ porcini risotto wasn’t even a question. Enhanced by the sweetness of the vibrant green baby peas, the starchy rice was slow-cooked until creamy. Mushrooms were abundant throughout the dish, and the red flecks of sun-dried tomatoes countered the porcinis’ earthy flavor with a sweet and savory backdrop.

The only dish that I didn’t enjoy was the poached lobster. I don’t care for an excess of sweetness in any of my entrees, so the super sweet vanilla in the lobster’s butter sauce ruined the overall execution of the dish. Served with luscious truffled mashed potatoes and decorated with subtly sweet horchata foam, the lobster was fresh and poached precisely how I would like – but I couldn’t get past the intense vanilla flavor in every bite.

Pastry chef Chad Durkin, formerly of Susanna Foo, does not disappoint with his excellent selection of desserts. The candied orange rice pudding was spicy and sweet, served alongside a moist slice of walnut cake and accented with a vanilla bean anglaise. The combination of colors – orange, white and deep brown – made each bite taste even better.

Intrigued as soon as I saw it, the iced white peach soup was a light and fresh way to finish the meal. Creamy white with rays of deep gold and red, the swirls of orange-apricot parfait were pleasantly sweet, and the juliennes of cucumber and peach highlighted the dessert’s mild fruity flavors.

Water Works has managed to come into its own since it opened last fall, turning out new and surprising dishes for every palette. With majestic views of Philadelphia’s river and a menu of Mediterranean classics with a creative twist, Water Works is a feast for the eyes as well as the stomach. 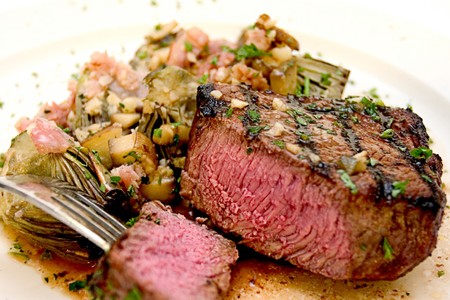