Tucked into the short side of an L-shaped shopping center at 16th Street and Bethany Home is a restaurant that has been pleasing palates and offering short tutorials in Phoenix history and heritage since 1997: the Phoenix City Grille. The warm, cozy ambience is enhanced by framed, well-lit color and black-and-white photos of Arizona landscapes and Phoenix movers and shakers. Diners enjoy a varied American menu with just enough hints of Southwestern and Southern cuisine to keep it interesting and memorable.

Southwestern touches of adobe planters and large mesquite doors welcome you to the warm, subdued atmosphere of the Phoenix City Grille in northeast Phoenix. A glass case on the sidewalk displays the menu and wine list, and daily specials are neatly written on a chalkboard. Inside, dark walls, deep, rich woods, and judicious lighting set a mellow tone. One side of the restaurant has dining tables on two levels. The other contains a private room that can seat up to forty people, paneled in oak with a raised fireplace and colorful, contemporary Kachina prints by Don Cannon. The center of the space contains a large, curved bar with a brick-lined window into the bustling kitchen and high tables for a more casual mood. Two flat-screened TV’s offer bar patrons the sports channels but the volume is kept very low and cannot be heard in the more formal dining area.

Service at Phoenix City Grill is top-notch. Reservations are pleasantly taken, seating by a friendly hostess is immediate, and one server, Amy, was helpful, timely, and anticipated needs without being intrusive. Courses are well paced, water glasses are kept full—all the little things that enhance the experience and make the evening go smoothly are part of the process here.

Reading the menu at Phoenix City Grille is cause for anticipation and several mind-changing moments. Everything sounds so tasty, it’s hard to decide. Chef de Cuisine Rory Hewitt sources product from and supports local farmers whenever possible, ensuring fresh and flavorful dishes.

The back of each menu features a history lesson, with the image of and story about one of the important figures in the development of Phoenix. You might learn, for instance, of Jack Swilling, who, after switching sides during the Civil War, then deserting altogether, finally established a homestead near the ancient Hohokam irrigation canals that crisscross this desert valley. He rebuilt them to service his own farm and the small settlement that grew up around it, called Pumpkinville. Pumpkinville was eventually renamed Phoenix by Swillings’s friend, Darrell Duppa, another colorful city notable. Your server will leave the menu after you order to allow you to enjoy a little local color with your wine.

The wine list is an extensive collection of mostly Californian offerings, with about forty-five selections, including five Champagnes. Much of the list, except for ten labels, is also offered by the glass. Two of the wines, Sebastiani (Napa) and Franciscan (Napa) are Wine Spectator Magazine Top 100 award winners. If you like white wine, try the Veramonte, a Sauvignon Blanc from Chile, that the wine list notes has a “hint of grapefruit.” So it does, and very pleasantly, too.

Eight Starters and Small Plates include dishes as varied as Crab Cakes with chipotle cream and Mac & Cheese with asparagus and Cure 81 ham. The Griddled Corn Cakes with black beans, grilled chicken, sour cream, and shredded jack cheese were golden and tender, with a strong corn taste and perfectly grilled chicken chunks sandwiched between two thin cakes. The creamy black beans paired well with the slightly grainy cakes and the serving was plenty big enough to share.

Phoenix City Grill offers six sandwiches and several choices of soups and salads. The Posole, a Monday Soup of the Day, combines small pork cubes, green chilies, and hominy with corn and a little bit of diced carrot in a savory, slow-cooked broth. Just a hint of heat from the chilies provides a nice back-of-the-tongue finish.

The signature Phoenix City Grille Salad combines baby field greens, sun-dried tomatoes, marinated artichoke hearts, toasted pistachio nuts, and creamy garlic dressing. The flavors and textures in this salad are a well-thought-out combination: the chewy tomatoes, crisp greens, and slightly sweet nuts are each distinctive and play well off each other.

The list of entrees is long and offers much variety. There are pastas, beef, pork, chicken, and fish. Standout entrees include Cedar Plank Salmon with a horseradish citrus crust, 16th Street Beef Pot Roast, Arizona Cowboy Steak, and a nod to the Southern contingent with Mesquite Smoked Baby Back Pork Ribs with chipotle BBQ sauce. There is also that Louisiana favorite, Jambalaya.

The Seafood Linguine arrives with six pink, plump, perfectly cooked shrimp atop a mound of al dente pasta. The crab and artichoke hearts are mixed throughout the dish and all the components are coated in a light lemon butter sauce and a scattering of capers. It is a classic preparation of Italian comfort food.

As for the last course, dessert, the list at Phoenix City Grille is short, but sweet. I always read the dessert menu first so I know how much room to save. I tried the Croissant Bread Pudding with Jack Daniels whiskey lime sauce. The sauce makes the dish. I also tried the Buttermilk Pie. This Southern favorite features a large slice of very sweet/tangy pie with the filling dense and rich and the surface thin and crispy, as it should be traditionally. Phoenix City Grille’s version is surrounded by a pool of warm, bronze-colored caramel sauce. There is an old saying in the South that if something tastes absolutely delicious it “makes you want to slap your grandma.” Phoenix City Grille’s Buttermilk Pie is like that!

When he opened the restaurant in 1997, owner Sheldon Knapp envisioned a place for a low-key, upscale dining experience with hometown color and pride as a backdrop. Phoenix City Grille has achieved his goal in fine fashion. For a fine dining experience at moderate prices, visit Phoenix City Grille. With its emphasis on good food, a cozy atmosphere, exemplary service, and an interesting take on Phoenix history, you will leave full, happy and more knowledgeable than when you came in. 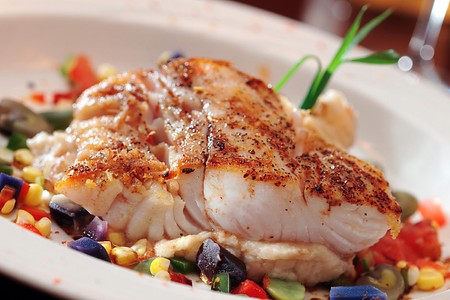