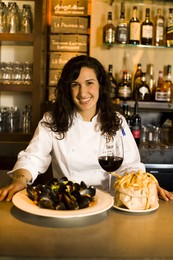 As a native of San Diego and former hostess at The Prado, it’s mere serendipity that Executive Chef Katherine Humphus would find herself to be a pivotal piece in the Cohn Restaurant Group’s latest development, BO-beau Kitchen + Bar. Just a few years back, she was jovially greeting and seating guests when it dawned on her that she wanted more. “I had absolutely no kitchen experience but I went to the kitchen anyway and asked if they needed any help.” Jeff Thurston, executive chef at the time, made it a mission to find a task for her, calling to his sous-chef, “She wants to be in the kitchen—find something for her.

Once upon a time Chef Katherine may have had zero experience under her belt, but she has undeniably rewritten that story after leaving the West Coast to gain exposure and pursue her newly discovered dream of becoming a chef. “Someone once told me that it didn’t count unless you studied in New York or Paris; so I thought, okay, I can tell my parents that,” she says with a dose of sarcasm and grin on her face. In her favor, Chef Katherine embarked on both of these sacred cities for all things culinary and studied at the prestigious Le Cordon Bleu, and then ultimately landed a job at wd-50 in New York City. “I learned so much in both of these places, but I knew I was ready to come back home, which is what I did.

Immediately after leaving New York, she was accepted into The French Laundry’s internship program, which further enhanced her appreciation for techniques and skills fundamental in the kitchen. “At The French Laundry, it was seriously all about precision,” she reflects. “It was like, okay—this is how you cut a carrot.” Humor aside, it’s still acutely vivid how much that experience truly shaped where she is now, allowing her to grow stronger by really strengthening those same techniques that she advocates and teaches in her own kitchen.

Although Chef Katherine has worked with many icons in the culinary industry, her roots are still embedded to her family for what they instilled in her. “My grandmother and mother are extremely talented cooks and my fondest food memories involve the two of them.” Even to this day, she yearns for her mother’s cooking on the days that she’s not in the kitchen herself. “It’s kind of my thing that on my days off, I will not cook.” She remains very adamant that she wouldn’t be caught dead in the kitchen when she’s not at BO-beau since she looks to those days to decompress and unwind. However, she does reveal that she’s not secretive about sharing her recipes with her family. “I will happily give my mother a recipe and she will happily prepare it, but I just choose to not cook on my own time,” she states.

As a female chef, she takes great pride in holding a position that most would not assume for her age and gender. She reveals that quite frequently, even while walking through the restaurant with her chef’s smock, patrons will ask for a refill on water or their dinner tab. She smiles while relaying these moments saying, “I never take it personally; in fact, they’re always more mortified than I am when they realize I’m the chef.” But, there is one thing that irritates her about being a female chef and ironically, it’s the chef’s coat. “It’s so unfair because male chefs have so many options of coats that are super ventilated, but if you’re a female, you have one choice and it gets really hot in the kitchen,” she states with her trademark sense of humor.

Without question, Chef Katherine has a long career ahead of her that will always embrace a creative and lighthearted process since she is a firm believer about having fun in the kitchen. No one can deny her meticulousness and technique, but that doesn’t outshine her inspired side that never tires of experimenting with different ingredients and flavors.  After reflecting on the most rewarding aspects of her career she effortless states, “My team and the customers,” taking great pride of the family culture of her entire staff at BO-beau. “We all hold the same standard and the communication from the front to the back of the house is impeccable.” Perhaps even more rewarding, she loves the interaction she has with her customers. “I love coming out to meet guests and hearing their feedback or just seeing their smiling faces.” She appreciates the positivity, but she’s not afraid of the negative, explaining, “Even the negative feedback, it’s all good to me because at the end, I know what to do to become even better and there’s always room to improve—I just appreciate all the feedback I get."