Candelas is an unassuming restaurant on the outskirts of the Gaslamp Quarter in Downtown San Diego, only steps from the convention center and many popular hotels.  Seeing the bar through the front door, one might assume Candelas is a small cafe.  Even entering through the bar and lounge area, decorated with couches arranged around a small dance floor, one may not realize that this is a full restaurant.  However, once led by the host back to the adjoining dining room, the full beauty of the restaurant springs forth from the simple yet elegant décor.

The superb service began even as I approached the table; the host was waiting to pull out my chair and drape my napkin on my lap.  This service was indicative of the attention we’d receive the entire evening at Candelas.  The restaurant achieves a comprehensive, Old World level of service that is not often seen these days.  The intimate tables and booths are impeccably set; the combination of the white plates and tablecloths with the silver of the utensils and pewter charger plates creates an elegant feel.  Our table was located to the rear of the dining room near the Chef’s Table.  The Chef’s Table is an area surrounded by wooden wine racks and enclosed in a small metal gate, reminiscent of an old wine cask.  Candelas has three other lavish private and semi-private dining rooms that are not visible from the main dining room, with capacities that range from 15 to 80.  While the restaurant is certainly upscale, the mood was decidedly more laid back and casual on the night of my visit, presenting me with grace as a form of formality.

Ten years ago, Candelas was created with the intent of forming a restaurant to bring people together and promote a sense of intimacy between both customers and the surrounding community; and intimacy is one of the primary charms of this restaurant.  This area of the Gaslamp is farther away from the main section, allowing for a quieter and calmer atmosphere surrounding the restaurant. Also, Candelas is primarily surrounded by taller apartment buildings, meaning only a diffused light filters in through the store-front style windows. The windows allow enough light to see comfortably, but they also set a romantic mood even during the day.  As the sun began to set it became quite apparent where the restaurant received its name as the lights dimmed and dozens of red and white candles lit up the dining room.  It really provided a personal setting that made me feel like my table was the only one in the restaurant.  The candle light was supplemented by strings of lily-shaped lights intertwined across the ceiling, making it easier to see but still maintaining a romantic atmosphere.  To further the mood, candles were lit and placed in tiny holders on the gate surrounding the Chef’s Table, giving it the comfortable yet romantic feel of an ancient villa.

Almost immediately I was offered a selection of warm, fresh gourmet rolls; I opted to sample the Jalapeño Roll, which was sprinkled on top with fennel seeds.  It was served with a unique butter mixed with garlic, walnuts, anchovy paste, and tequila -- just to name a few of the ingredients.  Together they created a unique taste combination. The roll itself was peppery and spicy without tasting too hot, and the butter added a salty herb flavor that was delicious.

After ordering, I asked the chef to recommend a glass of red wine for the meal, and he brought a flavorful 2005 L.A. Cetto Petite Sirah from Baja.  Candelas has an extremely large selection of both domestic and international wines; they have a fine array of fruity red wines from Latin and South America, as well as some fine California reds and whites.  In addition, they have a selection of the world’s finest champagne including Cristal and Dom Perignon.  This Mexican Syrah had a fruitiness to it and was a little heavy, the former balancing the spiciness and the latter the lightness of the seafood.

Before I could finish the entire roll, the appetizer arrived.  My two guests and I split every dish and the chef was gracious enough to divide them up onto three different plates, giving each the presentation it deserved.  For the appetizer we had the Estructura de Aguacate: a mix of chopped shrimp, crab, and squid atop a large avocado surrounded by a tortilla strip triangle.  It was very light and refreshing; the chilled seafood was mixed with lime, basil, and a mango vinaigrette, and was offset by parsley and tomatoes.  The avocado also added to the chilled, invigorating quality of the dish, as well as adding a bit of saltiness to the seafood.  Even split three ways, the amount of food was more than enough to whet my appetite, while being light enough not to fill me up.  As we finished with the appetizer the sun began to set and a soft purple glow began to drift in through the window.

After the appetizer came the Crema Fabiola, a Poblano chile cream soup.  In the center, surrounded by the soup, was a miniaturized island of mashed potato on top of which sat half of a lobster tail in its upturned shell, sprinkled with shredded sweet potato.  The soup itself was tasty; spicy but not hot due to the sweetness and thickness of the cream.  In the same way, the mashed potatoes complemented the spice of the soup nicely by adding texture and a slight salty taste to the dish.  These spicy and sweet elements came together when the grilled lobster was dipped in the soup, giving the lobster a bacon-like taste because of its crispiness and smokiness.

Since Candelas is known both for its steak and seafood entrées, my guests and I decided that we’d like to sample one of each.  For the seafood dish we chose the Camarones Cabo de Puertas -- the dish is composed of jumbo prawns circled around the plate on top of sashimi-style tuna in a balsamic demi-glace. These components are anchored around a column of rice topped with a scooped ball of avocado.  The first thing that struck me when viewing this dish was the anchor of rice.  In order to form it, the white rice was mixed with a kind of queso fresco that made it not only stick together but also quite flavorful.  The rather large prawns were grilled expertly with the outside just slightly crispy.  The balsamic demi-glace was mixed with a tamarindo sauce that lent a tangy, sweet taste to the prawns; and when coupled with the saltiness of the rice, the sauce brought the whole dish together.

As a steak dish we ordered the Placer Poblano, a 10 oz. filet topped with julienned poblano chile; the steak was served on a bed of bean empanadas, over a sea of green tomatillo sauce.  Next to the steak sat a jalapeño stuffed with molten mozzarella cheese, its juxtaposition making the dish appear as a work of art.  The steak was cooked medium-rare and was slightly seared, causing the top of the steak to be crispy while keeping the inside tender and flavorful.  The julienned chile was full of the raw tanginess without being too spicy, adding much flavor to the steak when accompanied by the spicy pepper flavor of the tomatillo sauce.  The empanadas were also tasty in the tomatillo, the spiciness of the sauce counter-balancing the base flavors of corn and mashed black beans.  I didn’t have the intestinal fortitude to try the mozzarella-stuffed jalapeño, but my dining companion did and found that it was welcoming with the melted cheese, yet still extremely hot!

The meal ended with a bang when the chef brought us Candelas’ specialty dessert, Crepas de Cajeta.  Cajeta is a traditional Mexican caramel syrup usually made from half cow-half goat milk, but Candelas uses all goat milk in its dish.  The creamy sauce sat atop a thin layer of crepes and was sprinkled with chopped walnuts.  The sauce was the most amazing caramel I had ever tasted -- I usually find it to be very thick, but in this case it was very creamy.  It tasted like the pure essence of caramel and was amazing with the sweetness of the crepes; and where normally thick caramel would stick in the stomach, this was light and left me wanting more.

As the meal came to an end, I noticed more and more people filling up the small square tables of the dining room, couples and small groups of adults enjoying personal conversation.  Night had come and the candle light danced on the wooden moldings and frames that decorated the walls.  The waiter made absolutely sure that we were completely satisfied before we left the table; and on the way out, I noticed a small group of patrons drinking at the bar and dancing to lounge music on the dance floor.  As I walked outside I noticed the transition between the soft candle light and the bright lights of the city, and hoped that I might visit this cozy restaurant again. 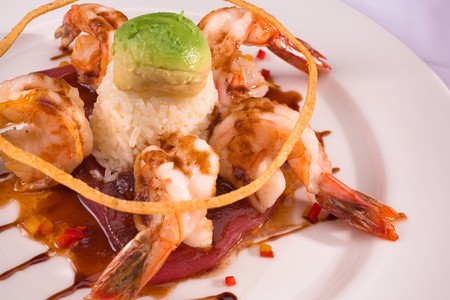 What is parking like?
There is street parking available, as well as a pay lot one block west of the restaurant
Do you have an Early Bird Special?
Yes, between 4-6pm nightly
What time do you begin serving breakfast?
8:30am on Saturdays and Sundays.

Includes a glass of house wine. From 5pm-7pm nightly.

Monday to Sunday 5pm-7pm, Sunday to Thursday 9pm-11pm. 50% off ANY drink and 50% off appetizers from the dinner menu. In bar only.