Account closed due to repeated delinquency for our services. Unfortunately, it has been our experience that account delinquency is the result of an establishment’s financial difficulties, which also commonly translate into a deterioration in service and food quality. As we have not been given the opportunity to assess the status of this restaurant, we cannot in good faith recommend it to our customers. While we can’t currently endorse this venue, we are happy to suggest a number of other high quality restaurants to meet all your dining needs. Thank you for your understanding.

Although just a short drive over the Coronado Bay Bridge, the Coronado Boathouse 1887 feels worlds apart from bustling downtown San Diego. The restaurant’s historic setting, casual atmosphere, and marina location give it the feel of a small-town institution, one where friends and family routinely gather to meet up after a long day out on the water.

The building itself appears to be a miniature version of the neighboring Hotel Del, with white siding, red roofs, and dramatic Victorian design. The resemblance is no accident—it was designed by the same architects, built by the same crew, and functioned as the hotel’s boathouse for almost a century. Despite being cast in the shadow of the Hotel Del, the building boasts its own unique history. Its claims to fame include playing host to an oceanographic laboratory that helped establish the more-permanent Scripps Institution of Oceanography in La Jolla. The building’s use as a boathouse officially came to an end in 1967, when it was moved closer to shore and converted into a restaurant.  Today, its 19th-century design remains graceful and stylish on a small scale, projecting a quaint version of grand elegance.

As we walked from our car to the boathouse, I almost wished we had spent the afternoon sailing on the bay. Sitting atop a pier in the Glorietta Bay Marina, the restaurant is surrounded by water and boats, and immediately evokes a desire to embrace the sea. This theme, unsurprisingly, continues throughout the restaurant, beginning with the narrow entrance corridor, which is covered with paintings and old photographs of the beach and the sea.

We were greeted at the hostess stand by owner Marty Jensen, and were quickly led through the dining room to a window-side table overlooking the water.  The room’s casual setting seemed at once historic and comforting. Antique chairs and tables fill the dining room, with each table featuring an old map of Coronado embedded beneath thick lacquer. White ceilings and walls reveal architectural details of the Victorian-era design, with tall ceilings, wood paneling, and large windows. Images of boats cover the walls, and colorful Tiffany-style lamps hang above the tables. The only outlier in the setting is the open kitchen, which, encased in steel and glass offers a decidedly modern contrast.

We were greeted by Laurie, one of the most friendly, genuine servers I have ever encountered. As she handed us menus and explained the day’s specials, we perused the wine and beer list.  Our eyes instantly spotted the locally brewed Coronado Pale Ale, and we decided it was the perfect way to begin our Boathouse experience. Our excitement heightened when we found out the brewer and founder of Coronado Brewery was an old friend of Laurie’s from high school. Swept away by the charming small-town feel of ordering a beer brewed not just locally, but by a personal friend of our server, we each ordered a pint.

The menu, I must confess, caused us a bit more trouble in terms of making a decision. While Executive Chef Scott Delgado’s enticing array of seafood and steaks seemed to offer just the right amount of options, it proved remarkably difficult to choose between them. Although, I will admit that being forced to choose between Fresh Alaskan King Crab, Maine Lobster Tail, and USDA Prime Filet Mignon is quite an enjoyable predicament. In the end though, two unique dishes caught our eye—New York “Blues” Steak and Macadamia Halibut—and we ended up leaving the triumvirate of indulgent entrees for another time.

We also selected two appetizers to accompany our refreshing Coronado Pale Ales: Creole Shrimp and Dungeness Crab Cakes. Just after we took our first sips of the crisp, creamy ale, Laurie returned with two large platters. The shrimp caught our attention first, with an awakening aroma of buttery spice rising from the plate. A generous portion of pale pink shrimp floated in a deep red New Orleans-style barbeque butter sauce, with two thin slivers of crisp brioche as an accompaniment. The shrimp were tender yet firm to the bite, with a feisty flavor that exploded on the tongue. A subtle hint of spiciness was just enough to give the dish a good kick while mild enough to keep us coming back for another bite. The sizeable appetizer easily could have been shared by a table of six, or ordered, along with one of the tempting side dishes or salads, as a full meal.

The Dungeness Crab Cakes were served in equally generous portions, with three plump cakes leaning against a tower of Asian slaw and a garlic-Dijon aioli. The cakes were soft and savory, with just a hint of crunch from the crispy shell. My palate welcomed the unmistakable flavor of Old Bay Seasoning, which it rarely encountered since my move from the East coast.  The aioli was tangy and creamy, and I indulged in generously dipping each bite into the sauce. I felt nothing could have paired as well with our beers as the succulent crab cakes.

As Laurie cleared our appetizer plates, which despite our valiant efforts included a few lingering shrimp and part of a crab cake, I perused the wine list. The selection was small enough to be approachable, but large enough to offer a mix of unique wines and reliable selections, both by the glass and bottle. I ended up ordering Laurie’s favorite, a Sonoma Cutrer Chardonnay from Russian River Valley. Crisp and laden with complex minerality, it would balance well against my rich fish dish while holding up nicely to my companion’s steak.

When our entrees arrived we couldn’t have been more delighted—both were a visual feast. The New York “Blues” set before my date featured a substantial USDA prime New York steak topped with crispy bleu cheese and panko bread crumbs and set atop a deep port wine demiglace. The steak, as with all steaks on the menu, was accompanied by a reliable Idaho spud and a ramekin layered with butter, sour cream, and chives. As my date set to work scooping the traditional accoutrements onto his potato, I snuck a bite of his steak.  The meat was tender as only USDA Prime can be, almost soft to the bite and ultimately savory. The show was stolen away, however, by the bleu cheese crust: a thin but still chunky layer of crisp, earthy cheese whose subtly pungent flavor was an ideal counterpart to the succulent steak. Why all steaks don’t come topped with bleu cheese, I decided, was one of life’s great mysteries. The port wine sauce was decidedly tart, and a bite of the cheese, steak, sauce combination was bursting with flavor.

I turned my attention to my own plate, which offered the most impressive moment of the meal.  I had ordered the Macadamia Halibut based solely on Laurie’s enthusiasm and her claim that “people return over and over just for this dish;” I instantly realized why this was the case.  The thick fish was barely visible on the plate, having been marinated in coconut milk, baked beneath a layer of crushed macadamia nuts and panko bread crumbs, then plated atop a warm peanut sauce and drizzled with both teriyaki reduction and a mango puree. For all its visual appeal, the dish did not disappoint the palate. The sauces gracefully mingled on the plate, the mango making the peanut sauce seem sweet, the teriyaki giving it body. The macadamia nuts, which I often find overwhelming, offered the perfect amount of richness. Each component was so rich that had the chef swapped the halibut for ice cream (maybe coconut-flavored?) the dish would have passed as dessert. I barely touched the tropical rice pilaf it was served with, opting to devote every bit of my appetite to the rich fish.

As we gleefully made our way through our entrees, the sun slowly vanished and lights lit up across the marina.  While we were on the North side of the restaurant, tables to the South, especially those on the enclosed porch, had even better views of the boats docked nearby.  The restaurant had filled to capacity over the course of the evening, and the room had filled with the buzz of casual conversation. While I could certainly hear the conversations of nearby tables, the atmosphere was so casual that this didn’t seem to bother anyone in the dining room.  The upstairs dining room, which I snuck a glance of on the way out, was also filled that evening, and with gently sloping walls, dormer windows, and a private bar, I could see why it was a popular location for private parties.

After our plates were cleared, Laurie returned, toting a tempting dessert tray with an array of sweet conclusions—in absolutely enormous portions. Each offering, from the raspberry cheesecake to the crème brulee, looked like it could serve at least two, if not four people. The towering chocolate lava cake actually looked like it would satisfy six. Had we not indulged in such a rich meal, we admittedly would have gone for the chocolate lava cake. As it was, the sublime halibut still lingering on my mind, we opted for a more refined slice of key lime pie.

Sharing a slice of pie, seated in an historic boathouse and overlooking a marina with the faintest hint of light left in the sky, I could not have felt more content. As the tart citrus bites washed away the lingering tastes of our meal, I relished the simplicity of our springtime evening—filled with good food and good company; beginning with a refreshing local beer and ending with a simple and equally refreshing slice of key lime pie. I felt as if I were home, or better yet, on vacation, without having to travel very far from home at all. 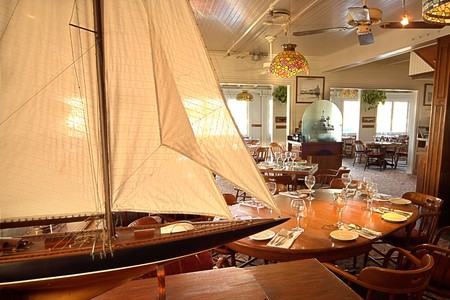 Some seafood items are seasonal.

Filet Mignon (6 oz) with mashed potatoes or rice pilaf, with your choice of one of the following:

Chocolate Lava Cake 0.00
Belgian chocolate cake filled with a rich chocolate truffle and flavored with brandy. Served warm, the chocolate center flows onto the plate when cut into. Topped with vanilla ice cream, caramel syrup and chunks of toffee.
Key Lime Pie 0.00
Light, creamy and full of flavor, this pie is made with real Key Lime juice from Florida. Refreshing and uniquely tart.
Raspberry Creme Brulee 0.00
The classic finale to a meal. Meaning "burnt cream," this popular dessert has a caramelized finish. Our version is enhanced with fresh raspberries.

18% service charge may be added to parties of 8 or more. There will be a $5charge for split entrees.

(All Sandwiches and Burgers served with French Fries)