Crossroads at House of Blues

Soulful food and bluesy tunes intertwine inside Crossroads at the House of Blues located in San Diego’s famous Gaslamp Quarter. The kitchen’s performance is spot-on, with energetic renditions of hearty classics from celebrity chef Aaron Sanchez like the Applewood Bacon Wrapped Meatloaf, Jambalaya, and Buttermilk Fried Chicken in addition to tasty signature hamburgers, sandwiches, appetizers, salads, kid’s selections and desserts. This fun and trendy restaurant celebrates the rich culture of the South with vibrant artwork and live music from an eclectic mix of performers. Come in for the popular happy hour from 4:00 p.m. to 7:00 p.m. nightly and sip away on scrumptious discounted drinks from the fully stocked B.B. Blues Bar. By the time you get to the encore of your meal, making sure to save room for Bourbon Bread Pudding, you may just find the kitchen has outshone the band.

When the House of Blues opened in San Diego in 2005, the much-awaited venue garnered considerable attention—for its music. With a huge, subterranean stage boasting great acoustics and a dramatic backdrop, the downtown venue quickly became a tour stop for national acts as diverse as My Morning Jacket and Britney Spears. But while the main draw at the House of Blues may be located beneath the bustling streets, an equally enticing experience rests at street level.

Stretched between 5th and 6th Avenues, the first floor of the House of Blues is no small side act. In fact, with a restaurant, a bar, and a stage that plays host to an array of local bands and DJ’s, the first floor proves itself a destination in its own right, regardless of the act performing below.

The entrance proper to the restaurant is off of 5th Avenue, which is where we were greeted by a smiling hostess on the evening of our visit. Passing the modest outdoor patio, we were led to a table in the main dining room, where we discovered the surreal, folk-meets-ornate decor that permeates the entire venue. The colorful room exuded a warm eccentricity, and as we took a seat among plush velvet drapes, wrought iron chandeliers, and a small stage near the entrance to the kitchen, we felt as if we were in a sprawling mansion inherited by one lucky hipster with a rather ornate, slightly quirky sense of style.

Just outside the main dining room, the evening’s entertainment had just begun to set up on the 5th Avenue Side Stage, and a savvy-looking crowd had gathered for both happy hour and live music. Past the small performance space was "Salvation Alley," a narrow stretch of the restaurant between the front dining room and 6th Avenue that, despite its downtrodden name, was one of the most visually arresting spaces in the restaurant.

The folk art that adorns the walls of the House of Blues—both the upstairs dining room and the downstairs venue—is a House of Blues tradition, upheld by a team of curators who have secured original art for each House of Blues venue. Each location functions as a gallery of sorts, showcasing unique collections of what has fittingly been dubbed the "visual blues." While the entire House of Blues San Diego is a feast for the eyes, Salvation Alley is particularly enchanting, as all the art in this space is composed of glittering, glistening beads. But the glitter doesn't stop where the frames end. The House of Blues gave a team of artists free reign over the surfaces in the venue, and every visible inch of wall, ceiling, and even stairway is covered in vibrant paint, or, as is the case in Salvation Alley, in silver and gold Mardi Gras beads.

Our attention eventually moved to the specialty cocktail list, a bound photo album that continued the theme of visual stimulation: each cocktail had its own page, description, and alluring head shot. Our server, Alyssa, eagerly suggested several creatively named concoctions, and enticed, we didn’t even wait to peruse the wine and beer selection. The Mango Mojito was served in a stemless martini glass, a cool concoction of mango, mint, rum, and sugar. The Soul Sensation, served in a handled "County Fair Drinking Jar," was at once evocative of that ubiquitous Mardi Gras drink, the hurricane. Each sip of this blend of three Bacardi rums and juice seemed sweetly reminiscent of Bourbon Street.  As we sipped our drinks the band commenced, and the room was filled with the sound of Modern Day Moonshine, a local trio that perform an energetic mix of funk, soul, reggae, and rock—a sound that seemed right at home in the restaurant’s eclectic space.

While Executive Chef Bill Gnam offers a varied mix of southern classics and modern American cuisine, we had no intention of veering away from the soulful standards. We started with a House of Blues Signature: the Pan Seared Voodoo Shrimp with Rosemary Cornbread and Dixie Beer Reduction. An enormous bowl emblazoned with the House of Blues logo and the words "In Blues We Trust" held a pool of glistening black sauce, a plump island of skillet-baked cornbread, and six equally plump shrimp. The sauce, an inspired reduction of New Orleans-brewed Dixie Voodoo Blackened Lager, imparted a dark, evasive flavor that hinted of malt and caramel; I spent several glorious bites trying to wrap my tongue around its complexity. The shrimp, rubbed with a house-made blackened seasoning and pan seared, were perfectly tender, and the cornbread, well I couldn't imagine a finer rendition. Moist and creamy, the thick, golden slice was more cake than bread, sinfully rich with bits of sweet corn and rosemary appearing in every other bite.

While reluctant to relinquish the soulful dish, I was enticed by another: Mediterranean Style Calamari tossed with Chili Garlic Sauce, Parmesan Cheese, Olives and Extra Virgin Olive Oil. Another large House of Blues bowl was piled high with a festive tumbling of tender rings, shaved parmesan, and specks of Italian parsley. My first bite packed a devious punch—I had discovered the salty kalamata olive relish and fiendishly spicy chili garlic sauce. My tongue tingling with joy, I quickly attacked the perfectly tender, flash-fried rings, thankful for the refreshing mango mojito in between bites.

As the band burst into an energetic homage to Herbie Hancock, I felt as close to experiencing synesthesia as I knew how—with vibrant sound filling the space, visual blues dancing on the walls, and soulful flavors at play on the plate, my every sense was gloriously satisfied.  While the House of Blues is best known for its main stage, the first-floor performers could clearly hold their own, and I eagerly scanned the schedule on our table.  Tuesday through Saturday evenings, a lively selection of local bands and DJ's rotates through 6:00 p.m. and late-night sets. With no cover, a lively setting, and stage-side dining, I was ready to come back and we hadn't even gotten to the entrees!

Alyssa returned with a trio of plates that assured we wouldn’t change our minds. I turned to the Grilled Fillet of Atlantic Salmon with Shrimp Jambalaya Risotto, Asparagus tips and Green Onion Butter. Bright pink salmon, sporting perfect grill marks, sat atop a creamy bed of risotto and a layer of diced asparagus. Each layer was a distinctly prepared—it was the combination of cooking techniques that made the dish brilliant. The salmon was moist and flaky, but cooked over the dry heat of a grill it took on an almost smoky flavor. The risotto, in contrast, was wonderfully creamy, transforming the vibrant yet bold flavors of jambalaya into an elegantly mild menagerie of flavor. The contrast between the two was remarkable—after a bite of moist risotto the fish seemed bursting with flavor; after a bite of salmon the risotto offered an enveloping creaminess.

Compared to the salmon, the flavors of the Marinated Rosemary Chicken Breast with Jalapeño Corn Bread Stuffing and a Pinot Noir Reduction were gentle and delicate.  A bone-in breast sat squarely atop a thick bed of pillowy cornbread stuffing, the moist, tender meat hiding beneath a crispy blackened skin.   The shallow pool of Pinot Noir reduction offered an almost airy sweetness with the tiniest hint of its tannic origins. The stuffing again proved that cornbread was a forte of the kitchen, with a velvety, moist texture that almost dissolved on the tongue. The heat was surprisingly tame considering the ingredients, and the flavors of the dish seemed to sit just on the fringes of southern cuisine.

I intentionally saved the most commanding dish for last—a Full Rack of Slow Smoked Tennessee Style Baby Back Ribs with Jim Beam BBQ Sauce and Mashed Sweet Potatoes. Fourteen inches of ribs stretched before me, accompanied by vibrant orange mashed sweet potatoes and gently buttered, tender green beans. Of all the schools of barbecue, Tennessee may offer one of the best approaches—pork ribs consistently basted with tangy sauce throughout their lengthy cooking process. The result, here as elsewhere, was a delightfully messy meal requiring a side order of wet naps. Each rib offered a generous portion of tender pork, which I gladly dipped into the extra ramekin of sauce on the plate. The sweet potato mash, like the pinot noir sauce, was light and airy, imparting flavor without heaviness—an ideal accompaniment to the ribs.

The interlude between meal and dessert was again filled with the band's energetic sound, and as our heads nodded to the funky notes of the Meter's Cissy Strut, our desserts likewise strutted out of the kitchen.  A gargantuan slice of Florida Key Lime Pie drizzled with Raspberry Sauce sat beneath a thick layer of fresh whipped cream, begging us to cut through the creamy triangle. Refreshing with a hint of tang, it would have made a refreshing end to any meal, but...

If you are only going to order one dessert at the House of Blues it would be a mistake not to order this: Raspberry and Granny Smith Apple Bread Pudding with an Oatmeal Topping, Crème Anglaise and Whipped Cream. Warm and aromatic, glistening light brown beneath a creamy scoop of vanilla ice cream and sitting in a pool of crème Anglaise, the bread pudding was irresistible. One bite and I was hooked; blues music may have once been likened to the devil, but this was certainly in the realm of heaven. After three bites, I was so enraptured by the blissful notes on my tongue I did something I never imagined I’d do in a concert hall—I stopped listening to the music. 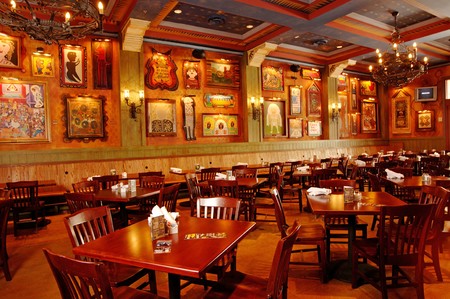 From the Salad Bowl

What's Between the Bread?

Below the Mason-Dixon Line