CLOSED - This location has closed. Please visit the Gaslamp location. After the recent move from its UTC location, La Jolla's premier steakhouse is now overlooking the famous La Jolla Cove. In addition to picturesque views, Donovan’s Steak and Chop house offers a refined setting filled with upscale class and elegance. The menu showcases a variety of cuts of succulent USDA Prime steak, while offering a variety of other options from Australian rack of lamb to North Atlantic Salmon. Appetizers and salads tantalize the palate before the main course, while potatoes and vegetables—always complimentary—accompany each entrée. An award-winning wine list offers an astounding selection of both well-known and boutique wines across an equally varied price range, and gracious service, complimentary valet parking, and VIP treatment are the icing on the cake.

Donovan’s Steak and Chop House is a true San Diego institution.  Since opening in January 1999, the restaurant has become a favorite of local celebrities, professional sports teams, business professionals, and anyone celebrating a special occasion. Although conveniently located in an ordinary office park in the UTC /Golden Triangle area, the restaurant is a destination—offering an elegant, secluded setting, service reminiscent of an elite supper club, and unrivaled steakhouse fare.

The transition to refined luxury begins not at the door but before it, with the restaurant’s complimentary valet. A towering, windowless door of dark wood stands at the entrance, adorned only with an embossed bronze plaque bearing the words: "proper attire suggested." Past a small alcove, the entrance opens to a bar and reception area, a surprisingly busy, bustling space. We entered to catch the tail end of Donovan’s daily happy hour and the bar was full of energy. Well-dressed guests seemed relaxed and jovial, enjoying after-work drinks and Donovan’s happy hour specialty: complimentary Kobe steak sandwiches.

We left the bar scene to the happy hour patrons and followed our host into the main dining room, which, while equally packed, was calm and serene.  Deep mahogany paneling and dim Tiffany lamps set the stage for elegance; low walls between booths were peppered with bronze Remington statues in a playful nod to the old west. White linens covered the tables, which were generously spaced, making every guest’s dinner a private, intimate affair. While the tables themselves were intimate, the restaurant itself was quite large, with seven different rooms and a capacity for over 300. That evening, each of the private rooms was accommodating a private party—business presentations, family reunions, and birthday celebrations are common.

We settled into our generous booth and felt at once at ease, surrounded by supple leather and white linen. We were instantly greeted by William, who along with Francisco and Matt would take care of us throughout our meal. All tables at Donovan’s are attended by not just one server, but a team of three, ensuring every crumb accounted for, every glass refilled. Yet the service remains unobtrusive; never once did we feel we were overly-waited on.

I eagerly picked up the wine list, whose 28 pages offer one of the best selections in the city. Donovan’s has been granted the Wine Spectator Best of Award of Excellence—an honor bestowed on less than 10 restaurants in San Diego—for seven years in a row (2000-2007). The list offers a truly dazzling, worldly array of wines. The selection ranges from everyday to special occasion, with each bottle hand-picked to accompany the cuisine. I was impressed by the “wines by the stem” selection alone; it ranged from familiar to surprisingly high-end, allowing guests with exquisite tastes to be satisfied with just a glass. French, Italian, and California wines were particularly well-represented, with half bottles as well as bottles and large-format offerings.

I settled on a glass of Hill Family Estate 2005 Carly's Cuvee Chardonnay. The Hill Family makes excellent wines and this was no exception: barely oaky, it was bright, round, and almost fruity, and promised to pair well with our starters. My date's cocktail, a Hendrick's Martini, gave a surprisingly similar satisfaction, thanks to the subtle complexities of Hendrick's gin. Satisfied even before we were sated, we turned to the menu, eager to begin our meal.

Executive Chef Martine Venegas, who has been with Donovan’s since its 1999 opening, offers an array of varied and creative starters, adding a bit of variety to the classic steak house meal. We settled on two: the Bacon-Wrapped Scallops and, upon Manager Steve Josefski’s eager recommendation, the Seared Cajun Lamb Chops. They arrived, of course, exactly at the same time, our team of servers simultaneously placing the plates on the table.

The Bacon Wrapped Scallops were a feast for the eyes: four plump scallops in a pool of broth, each enveloped by a thick ribbon of smoky bacon and topped with a crispy sprinkling of blackened fresh herbs. Amid the quartet rested a medley of stewed sweet tomatoes and onions, and below lay a pool of light tomato-wine broth. Each pale scallop afforded at least three bites, our knives sliding effortlessly through the premium meat to carefully divide both scallop and bacon. Each bite was sublime—mild, silky scallop mingling with sweet, smoky bacon and a burst of fresh tomato flavor.

It was only after several mesmerizing bites that we moved on to the Seared Cajun Lamb Chops, as the playful presentation was urging our attention. Four dark chops leaned like toppled dominoes against a half baked potato, which, standing upright, was hollowed out and filled with creamy buttermilk dressing. The first bite was awakening: a rush of meaty lamb followed by a second burst of spice. Tender doesn’t begin to describe the texture—the crisp, perfectly seared, spice-coated outside gave way to nothing less than moist, succulent velvet.  I almost wished I had ordered the lamb entrée.

Our mouths lingering over flavorful starters while anticipating entrees to come, it was time for a refreshing interlude. Donovan's Chop House Salad fit the bill perfectly. Creamy blue cheese dressing covered crisp romaine and silky Bibb lettuce, mixed with sliced hearts of palm, diced cucumber, tomato, bell peppers, and carrots. As if to ensure decadence even in a salad, blue cheese and bacon crumbles garnished the dish. Each bite was creamy and refreshing, the clearly-fresh vegetables bursting with moist flavor.

It takes little to spot Donovan's flagship entree on the menu: USDA Prime Filet Mignon. The filet appears not once, but seven times, offered in three different sizes, with three different accompaniments, plain or pepper-crusted. Needless to say, it took little to persuade us to order this steak, although we did waver on the preparation. All three combinations—an 8 ounce Filet paired with Shrimp Scampi, Portobello Mushroom, or Bacon-Wrapped Scallops—were tempting, but ultimately we decided on a classic: the 10 ounce Filet accompanied by a baked potato.

For our other entree, there was little hesitation. If USDA Prime Filet Mignon is the crown jewel of the land, its counterpart, the crown jewel of the sea, is Australian Cold Water Lobster. Donovan’s plump, oversized lobster tails are baked, rather than steamed, adding a dimension of flavor to the already succulent crustacean. Of the four complimentary potato accompaniments, we selected the lightest: the garlic smashed potatoes.

The wine list, which can contain anywhere from 450-700 bottles at one time, changes weekly, hand-picked by General Manager Steve Josefski and Sommelier Andrew Bushnell. Their approach, "buy by feel," not only results in an excellent selection that matches any combination of dishes on the menu; it means Donovan’s has personal relationships with many wineries on its list. Rather than being pressured into selecting from among the 500+ bottles that evening, we opted for a recommendation from the sommelier. Professional and gracious, Steve gladly suggested a 2004 Stephen Ross Pinot Noir from Bien Nacido Vineyards.  It was perfect—medium bodied, it had a noticeable complexity that faded to a smooth finish, and really opened up to both the steak and lobster.

And then there were the steak and lobster. The Australian Cold Water Lobster tail was gorgeous—commanding the plate and bursting out of its shell.  Just as I was lamenting how much damage I would do the presentation, William deftly removed the lobster from my plate, and with one swift motion, removed the meat from the tail. What was left was a gloriously large steak of lobster meat, which I could gloriously eat without destroying presentation. The lobster was succulent and supple, the pale white flesh eagerly absorbing a clarified butter sauce to reach decadent heights. The garlic smashed potatoes, a whipped combination of potato skin and flesh were creamy but not overpowering; the accompanying baby carrots and snap peas were clearly fresh, crispy, and sweet.

While I was marveling at William's skillful move with my lobster, my date was receiving the royal treatment from Francisco, who was dressing his potato. Holding a tray of accoutrements, Francisco was carefully spooning toppings onto the large Idaho spud, pausing before each spoonful to ask my date’s approval. Plump balls of butter melted instantly, covered by a layer of creamy sour cream, delicate chives, and, of course, bacon.  While I was at first distracted by the showy spud, it did not steal the show; the regal 10-oz. Filet was enviably gorgeous. Charred to black on the outside, the filet cut to reveal a thin ring of brown and an elegant pink center. The contrast between the blackened interior and velvety interior was stunning; indeed it is Donovan's forte. Steaks are prepared in a 1600 degree oven, ensuring a solid sear and short cooking time. Juices are sealed in, steaks cooked to perfection.  Each bite was better than the last.

When your meal consists of filet mignon and lobster, dessert hardly seems necessary, yet we saw no reason to cut our indulgent meal short.  The Triple Chocolate Brownie was a sweet tooth’s dream: white and dark chocolate woven into a moist, almost fudgy brownie surrounded by a pool of chocolate truffle sauce and buried beneath a slightly melted scoop of vanilla Häagen Dazs. It was a wonderfully playful end to an astoundingly elegant, refined meal.

On the way out, we paused in the tiny alcove between the bar and the exit. Elegantly appointed with two wingback chairs, a small lamp and table, and framed autographed photographs, it afforded one last moment of calm before stepping out into the night. Like the sports figures and celebrities whose autographed photos filled the walls, we agreed: Donovan’s had our seal of approval. 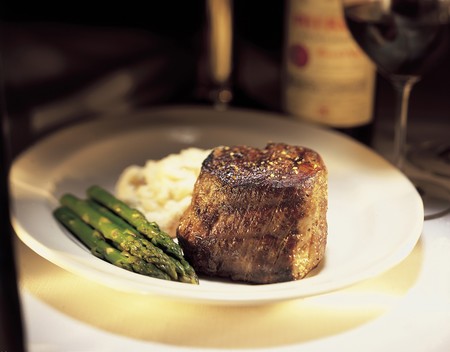 All entres are served with fresh vegetables and your choice of Baked Potato, Garlic Smashed Potatoes, Giant Steak Fries or Skillet Fried Potatoes with sauteed onions and peppercorn gravy.