El Agave: Authenticity in the Heart of Old Town

El Agave restaurant and tequileria is a gem in the sea of Mexican restaurants in San Diego. Here you won’t find tacos or burritos, or even chips and salsa; instead dishes composed of tantalizing ingredients and complex sauces are prepared according to ancient techniques that truly showcase the sub-continent’s culture and history. Originally from Mexico City, owner Juan Carlos Gomez and chefs Mario Montes and Julio Obando celebrate the cuisine, ingredients, and techniques of central Mexico, where a rich culinary history dates back to Aztec times.

Located on the outskirts of San Diego’s Old Town, just a little over a block away from the onslaught of “Mexican” restaurants and cafes, El Agave has paid homage to the intense flavors and richly satisfying dishes of Mexico for over a decade.  The dining experience is uniquely upscale, with a broad selection of entrees that mix haute standards such as filet mignon and sea bass with deeply flavorful Mexican staples such as epazote, chipotle, and ancho chiles.  If the menu alone isn’t a draw (and it should be), the restaurant doubles as a tequila museum, with more than 1700 tequila bottles lining the walls, 500 of which are available to accompany the central-Mexico-inspired cuisine.

The nondescript, stucco exterior belies a rich interior, which boasts an intimate space filled with subtle details that quite convincingly evoke another country. The second floor space, while small, offers several seating options, including an outdoor, semi-private patio, an intimate main dining room, an enclosed terrace, and a tight bar area that seats no more than four, maybe six if you’re friendly. The dining room is equally cozy, with closely-spaced tables creating an ambiance that seems both comfortable and warm.

The first thing I noticed upon entering the restaurant was, well, tequila.  Gomez is an avid tequila collector, and his 1700-bottle collection spans across every available inch of the restaurant’s walls—in glass cases, shelves strung beneath ceiling beams, and the tops of antique wood cabinets.  The bottles are gorgeous, some over 100 years old, others made of ceramic or clay, molded into commemorative shapes like the mascot of the 1970 World Cup, which was held in Mexico City.

Taking our eyes away from the walls, we were led through the dining room to the large terrace, which was sheltered by glass windows and a canopied roof that could open on warmer days. The tequila collection overflowed here, with more glass cases and antique banquettes.  We were seated at a table in the corner, and were greeted by our server, Alberto, who brought menus, the wine list, and an astoundingly enormous list of tequilas.

While the restaurant has a modest yet well-selected wine list, the focus is clearly on the tequila. The alphabetized list of over 500 selections (ranging from $5.75 to $175 per 2 oz. pour) was admittedly daunting. Additional selections, such as El Agave’s own brand of tequila, are also available, although not on the menu, as are bottled Mexican beers and a range of cocktails, including several margaritas. With only two wines offered by the glass—a white and a red—we decided tequila was the way to go, and ordered two Cadillac Margaritas. The drinks would prove to be our first glimpse into the restaurant’s commitment to purity—the drinks were crafted from scratch with lime juice, orange juice, Grand Marnier, and 100% agave tequila.

As we marveled at the excellence of our pre-dinner drinks, Alberto brought out our first course: Tlacoyos Cuitlacoche. Two oval-shaped forms graced our plate, each a tower of deep, dark hues. The tlacoyos, thick, blue-colored cakes made of masa (dough from ground corn and water), were topped with layers of feisty chipotle salsa, dark cuitlacoche, cilantro, onions, and queso fresco.  Cuitlacoche, a fungus analogous to mushrooms that grows on ears of corn, is considered a delicacy in Mexico, and I was excited to have my first taste.  The dish was elusive, filled with rich, complex flavors of smoke, wood, and earth that all seemed new to my palate. The tlacoyo tasted purely of corn, a refreshing departure from ubiquitous starchy tortillas. The salsa was not just smoky, it tasted of smoke, as if the chipotle peppers had just been pulled from the fire. And the cuitlacoche, a thick mixture of black puree and silver bulbs, was deliciously elusive, both smoky-sweet and earthy. In fact, the dish as a whole felt rooted to the earth rather than concocted in a kitchen.

We relished every bite of our Tlacoyos, reveling in the pure flavors, but also the history. Masa dough has been found to have been made as far back as 6500 BC; cuitlacoche was considered a delicacy back in Aztec times. It was as if this dish was reminding us that food has been essential to humanity far before our modern times, fast food, and all-too-often rushed meals.

As if right on cue, our next course offered a modern interpretation of an ancient ingredient, proving that the rich flavors of heirloom ingredients (in this case the nopal cactus) were still very much relevant today. The Nopalli Salad featured diced (and de-thorned) nopal cactus, mixed with cilantro, onion, and hot green peppers. The dish arrived as a cylindrical form: a base of fresh avocado supported the cactus medley, while a layer of queso fresco sandwiched it from above.  Alberto brought a basket of warm, fresh corn tortillas, and suggested we scoop the salad into the tortillas and eat the dish with our hands, like a taco.  Again, the flavors were new and surprising, the cactus both wholesome and tart, like citrus; the queso fresco light and refreshing, like a more flavorful mozzarella.

Together, our first two courses could have formed a filling, satisfying, and nutritious meal; as it was, we were eager to sample the seafood and meat dishes offered at El Agave. Our first of three outstanding entrée suggestions from Alberto was the Camarónes Guajillo: a medley of enormous prawns and vibrant red ribbons of guajillo chiles, served atop a bed of black beans, rice, and a slice of nopal cactus. The entire dish was surrounded by a bright orange broth, made from fresh orange juice and spicy peppers. The guajillo peppers, the most visually unique element of the dish, offered the slightest hint of heat without being overly spicy. The shrimp, marinated in chile oil, offered subtle flavor, but it was when these two combined with the orange sauce that the dish triumphed. The tastes were clean, pure, and refreshing, while at the same time offering a lingering, but not overpowering, spice.

We next sampled two different mole dishes: Mole Verde and Mole Poblano Don Julio. Both versions of this rich, complex sauce were served over slow-cooked pork and accompanied by rice and a hollowed-out zucchini squash stuffed with corn and carrot. The Verde, a famous mole from Oaxaca, was light green, the result of a careful concoction of roasted tomatillo, two chiles (chile de agua and serrano), herbs such as epazote, and corn masa.  Light yet flavorful, the sauce offered layers of citrus, smoke, and a concoction of mild spices that somehow seemed fresh and new with each bite. The savory pork, slow-cooked to graceful pull-apart tenderness, perfectly embraced the complex sauce, and we relished each forkful.

The Mole Poblano Don Julio, however, was the momentous dish of the evening. Described on the menu as “the soul of mole,” the dish did nothing but live up to, if not exceed, its description. Deep brown in color, the sauce was an intoxicating combination of a myriad of ingredients, including three types of chiles (pasilla, ancho, mulato), cloves, black pepper, chocolate, garlic, cinnamon, coriander, and sesame seed. Soulful indeed, the sauce offered astounding complexity: the first bite suggestive of chocolate, then transitioning into an elusive burst of spice just at the moment I expected sweetness. It was at once intoxicating and captivating, a shock to my senses and an awakening call to flavor. I insist you try it for yourself.

While I didn’t think anything could rival the Mole Poblano in intense, pure flavor, our dessert, the house-made Flan came delightfully close. Featuring Mexican caramel made with cornmeal, the tiny cylindrical form was nothing short of amazing. Each bite tasted so purely of caramel that we ate at a snail’s pace, letting each spoonful fully dissolve over our tongues. The dessert, like the meal, showcased carefully selected, quality ingredients in a way that celebrated pure, intense flavor.

As the flan disappeared, we realized our meal would not be complete without sampling the restaurant’s namesake. Rather than navigate the 500-selection menu, we opted for El Agave’s own Añejo (tequila aged over a year). A tall, slender 2-oz. glass supported by a wooden frame arrived, with glistening gold liquid that looked positively radiant. Smoky, essential, and pure, the liquid glided effortlessly and elegantly down our throats.  As is traditional, a tiny, salt-rimmed glass of sangrita accompanied the shot, a mix of tomato juice, Tabasco sauce, and lime juice, which provided a sweet, almost candy-like finish.

As seemed to be the theme of the evening, I was surprised by the quality, the inherent flavor, and the overwhelming purity, which awakened not only my taste buds, but my head, as I realized I had been deceived all these years by Americanized versions of the rich, vibrant traditions of Mexico. As we got up to leave, dizzying memories of smoky cuitlacoche, deep poblano mole, and rich caramel flan resonated across my tongue. I was hooked on the country’s rich culinary traditions, vibrant ingredients, and respectful preparations. Never again could anything less flavorful and satisfying pass for true Mexican cuisine. 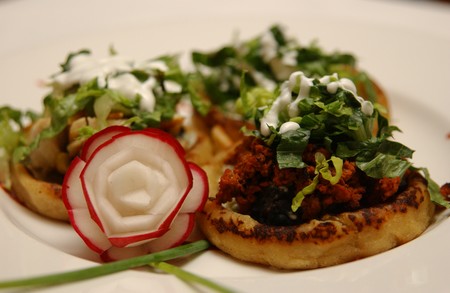