Himalayan Cuisine, nestled in the east county city of La Mesa, offers authentic Indian, Nepalese, and Himalayan cuisine. The warm earth colored walls and traditional Hindu and Buddhist decorations accentuate the overall exotic mood. Specialties include various momos (stuffed dumplings) and vegetarian tarkaris (spicy vegetable curries) prepared in an array of distinct options. Carnivores and seafood lovers alike are sure to delight in the abundance of chicken, lamb, and seafood selections that are available for both lunch and dinner. The atmosphere is both casual and inviting: Guests feel as though they are delighting in the traditional homemade meals found in another part of the world. Journey to Himalayan Cuisine to experience one of San Diego’s few destinations offering Himalayan and Nepalese dishes in addition to Indian cuisine.

The Sublime Spices of Himalayan Cuisine

San Diego is home to several Indian restaurants, but only a rare few offer the colorful flavors of Nepal. In the heart of a strip mall in the east county city of La Mesa, flanked by Burlington Coat Factory and a 99-cent store, the exotic tastes of Himalayan Cuisine are waiting to be discovered. The small illuminated sign above the entrance humbly reads “Himalayan Indian & Nepalese Food”, in white and ruby block lettering. The restaurant is owned by Khem Kharel, an immigrant from Nepal who came to San Diego nearly twenty years ago. Next door is the quaint Indian Bazaar, also owned by Khem, which my lunch companion Jan and I agree to venture to after our meal.

Do not be put off by the mainstream location of this restaurant; once inside, I felt as though I was transported to an ancient temple secreted in the majestic Himalayan mountain range. The décor is exceedingly rich in traditional and spiritual Indian and Nepalese motifs, with figurines of idols, pottery, masks, hanging colored lanterns, and folk art paintings. The walls are colored in vibrant hues of saffron and clay for a rich, warm feeling. The ceiling is embellished with ornamental wallpaper featuring intricate red and black patterns suggestive of the overall exotic mood. The overhead fans resemble giant palm leafs and extend the feeling of an extrinsic paradise. My senses are awakened by the savory smell of curry wafting through the air, and the refreshing sounds of the beautiful hanging water feature as we enter.

We are greeted by a server adorned in the traditional men’s attire of Nepal: a suruwal garment consisting of a long colorful tunic and a petite round hat called a topi. There is large dining room straight ahead, but we gladly follow our server to the smaller dining area to the left. The room is encompassed with small wooden booths along the walls and several freestanding tables in the center, each enveloped in crimson linen tablecloths. We are seated in a booth, which is quite snug even for my small frame, but nevertheless a quiet intimate setting for a conversation with my guest. The room is informal but inviting, with most guests wearing the typical California casual fashion of denim and cotton while enjoying their lunchtime meals.

Opening up the leather bound menu, my eyes are greeted with a vast array of traditional Indian, Nepalese, and Himalayan dishes. The menu is comprised of appetizers, soups, salads, biryanis, momos, vegetarian tarkaris, chicken dishes, lamb dishes, seafoods, and tandoori dishes. Separate side orders are also available, along with several desserts that I am eager to taste. Many entrees are bursting with coriander and cumin, two ingredients essential to Indian and Nepalese cooking. In both countries, a vast majority of inhabitants practice the Hindu religion in which cows are considered sacred symbols of life. That being said, beef will not be found among the many menu options.

While waiting for our appetizers, my guest and I are treated to a complimentary lentil soup, which is a lovely way to commence the autumn afternoon. The soup is warm and creamy in a small white bowl, with hints of mild herbs and spices. Next, our server brings out the two appetizers: Vegetables Pakora and Lamb Chholia. The Vegetables Pakora is mouth-watering: large fried fritters of onion, spinach, and cabbage cooked with Himalayan spices and herbs. The outside of each bite is perfectly crisp in texture with a soft and moist inside. The Lamb Chholia is served with a choice of spiciness on a 1-10 scale, and we opt for a five. The medium heat of the Himalayan sauce is the ideal accent to this dish: A medley of marinated lamb, bell pepper, onion, and green onion all prepared in a special clay oven. The generous cuts of lamb are incredibly succulent and tender, and are flawlessly accompanied by the light tang of the bell peppers.

After our appetizers, my guest and I enthusiastically await the arrival of our promising entrée selections. Each entrée is served with a choice of Basmati Rice or Butter Naan bread, so we decide to sample one of each. The first entrée I try is the Daal, Bhat Ra Tarkari, which first caught my eye on the menu because of its description as a typical Nepalese dish. This entrée is a Nepali yellow Tarka Daal, or pulse stew, with your choice of veggie or chicken curry, basmati rice, and served with Achar. It is available on a level of 1-10 on spice, and feeling more adventurous, I opt for a 7. The Daal, Bhat Ra Tarkari is a burst of aroma and fiery spices with a vibrant yellow color. The pulsated lentils are wonderfully creamy and the abundance of cilantro makes for a seriously zesty dish. For spice enthusiasts like myself, any meal packed with loads of heat is an irresistible pleasure. However, for my guest and others with a higher sensitivity to spice, I recommend sticking with a spice rating of 5 or below. The Butter Naan, an Indian specialty bread cooked in a traditional Tandoori oven, is both chewy and crisp. It possesses subtle notes of the oven’s wood and smoke from which it was cooked. The next entrée I sample is the Aloo, Tama Ra Bodi, another typical Nepalese dish. The Tama Ra Bodi is a fusion of potatoes, baby bamboo shoots, and black-eyed peas smothered in Himalayan sauces and spices. Once again, we are given the choice of spice level, and we select a 5. The Aloo, Tama Ra Bodi arrives in a deep white bowl, warm and steaming. The unique combination of potatoes and black-eyed peas create an earthy, salty taste that I instantly adore. I enjoy several helpings of this hearty, satisfying dish.

The Vegetables Ko Momo is the final entrée, and it proves to be a favorite. This dish features 8 steamed dumplings packed with minced cabbage, fresh spinach, mushroom, cashew nuts, onion, cilantro, green onion, and spices, served with a side of a unique Himalayan sauce. The dumplings are eloquently arranged in a circular fashion with the sauce at the core. The dumplings are soft and plump, while the combination of mushrooms and cashews are savory with a light crunchiness. The sauce is distinct from the previous sauces I sampled in that it has a sweeter, flowery flavor. After a swift modest taste, I drench my portion of the dumplings in the sauce and gleefully munch away.

Even though we are full, my guest and I splurge in sharing two dessert items. The first item I sample is the Gulab Jamun: Two juicy, sweet milk balls engulfed in rich, sugary syrup. It is served hot in a charming antique silver tureen. The milk balls are doughy and supple in the sea of mahogany colored juices; they immediately begin to fall away in my mouth with each fervent bite. The rosewater-scented syrup is exceptionally sweet and makes for an intoxicating treat that any sweet tooth will delight in. I complete my dessert craving with the Gajar Ka Halwa, carrot pudding, something entirely new to me which sounds intriguing. Though not nearly as sweet as the Gulab Jamun, it is equally satisfying and reminiscent of a blended candied yam with a delicate hint of salt to accent the sweetness. Overall, the desserts were a scrumptious contrast to the savory dishes that preceded them.

Completely full and satisfied, we linger for a while to relax and converse uninterrupted. Before leaving the restaurant, we remember to stop by the neighboring Indian Bazaar. The store carries exclusive Indian ingredients that are not offered in other nearby markets. The sales associate is happy to provide us with every ingredient necessary to make a lentil soup akin to the one we enjoyed in the restaurant. The store also offers Hindu and Buddhist decorations, jewelry, vases, rugs, satchels, wind chimes, and other unique gifts to bring the essence of India home. Upon our stroll back to the car, I notice a banner which boasts, “Now Serving Nepalese Beer & Wine”. This is an enticing feature of the restaurant that I am thrilled to endeavor during my next visit to Himalayan Cuisine. Until then, I will polish off the remainder of my leftovers and reminisce about this exotic eating excursion. 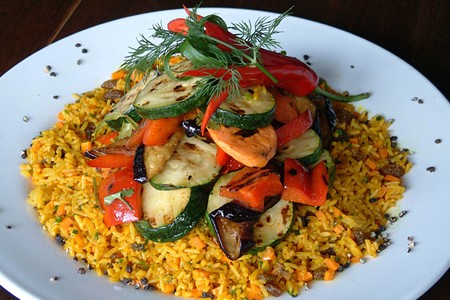